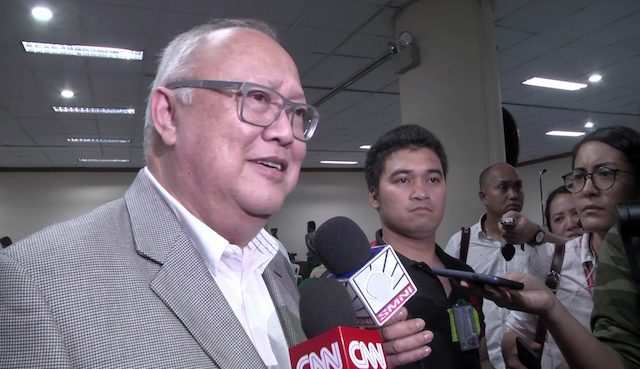 MANILA, Philippines – The Commission on Appointments (CA) committee on environment and natural resources wrapped up its confirmation hearing of Gina Lopez’s appointment as environment secretary on Thursday, March 9, after a two-day marathon.

The second day of the hearing lasted almost 7 hours as Lopez faced off with her oppositors, most of them from the mining industry and mining communities.

After the hearing, CA vice chair and San Juan City Representative Ronaldo Zamora was asked if he’s satisfied, on a personal level, with Lopez’s answers and he answered a short and straight “no.”

Zamora barely asked questions during the two-day hearing, and for a reason.

“I have gone through too much, and I have had to explain that in my view, relationship with an individual who happens to be a stockholder of a publicly-listed corporation, I didn’t want that to become a side issue.  It’s completely unnecessary,” he told reporters.

Lopez has repeatedly referred to Zamora as a CA member with “mining interests,” “into mining,” and “a miner.”

Just a day before on Wednesday, March 9, Zamora made headlines after Lopez told him to relay a message to his brother about the environmental effects of mining.

Other stories from the hearing:

The older Zamora rejected Lopez’s claim, saying he is “not guilty” because he has not “killed a mountain.”

On Thursday, Representative Zamora said he would’ve asked Lopez “many, many questions” if he were left on his own.

“The important thing is, appearances have to be kept. That’s the basic answer. If I were left on my own, I would’ve asked many, many questions. But you know, this is the Philippines, this is not a different country, you don’t want to step on too many toes while you’re doing what is basically a day job.”

While it’s not for him to say if Lopez will be bypassed, Zamora said he’s not sure if the CA has “enough time to do this.”

“We are going to adjourn, we’re going to take a break, that’s a 6-week break, and that is on Wednesday. So I’m not sure that we have enough time to do this.”

The CA committee will meet on Tuesday, March 14, for an executive session on Lopez’s ad interim appointment. – Rappler.com