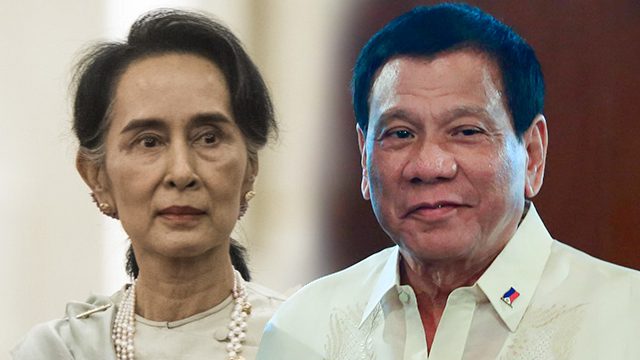 Duterte’s meeting with Suu Kyi, now Myanmar’s State Counselor and Foreign Minister, is just one of the highlights of his official visit from March 19 to 20, according to the Department of Foreign Affairs (DFA).

He will also be participating in bilateral talks with Myanmar President Htin Kyaw who will host a state banquet for him, said DFA Spokesman Assistant Secretary Charles Jose on Thursday, March 16, during a Palace news briefing.

In keeping with tradition, Duterte will attend a gathering of Filipino residents of Myanmar. This will take place in the capital, Naypyidaw.

There are around 1,800 Filipinos living in Myanmar, many employed by foreign corporations and international organizations, said Jose.

Signing of deals in Thailand

After his visit to Myanmar, Duterte will fly to Bangkok, Thailand for an official visit from March 20 to 22.

It would be his 2nd time in Bangkok as President since he had visited back in November to pay his respects to the late Thai monarch, King Bhumibol Adulyadej. (READ: Gov’t spends P277M on Duterte’s foreign trips)

“They are expected to discuss issues of mutual concern, including political, economic, agriculture, energy, education, and defense cooperation,” said Jose.

Bilateral deals between Thailand and the Philippines are likely to be signed during Duterte’s visit.

Priority programs of the Association of Southeast Asian Nations (ASEAN), which the Philippines is chairing this year, are also part of the agenda.

Duterte and his official delegation will meet members of Thailand’s Filipino community, said to number over 16,000, according to the DFA.

Jose said there is a possibility that Duterte and Thai officials will discuss the West Philippine Sea (South China Sea) dispute.

ASEAN countries are working this year for the completion of a framework Code of Conduct in the South China Sea.

“We are not ruling in or ruling out discussion on the South China Sea. But if ever this will be discussed, I think it will be in the context of reaffirming our position, especially ASEAN’s position on our desire, primarily for the full and effective implementation of the 2002 DOC (Declaration on the Conduct of Parties) and for the early conclusion of the negotiations for the COC (Code of Conduct),” said Jose.

If Philippine officials bring up the dispute, Jose said it will likely be to reiterate “our commitment to the peaceful resolution of disputes and for our adherence to the rule of law.”

Duterte’s visits to Myanmar and Thailand are part of his “introductory” trips to ASEAN countries, partly in fulfillment of the Philippines’ role as ASEAN chairman this year.

These will be the first foreign trips to be attended by Enrique Manalo as Acting Foreign Secretary.