Duterte tells Robredo, ‘Want me out? Marry me instead’ 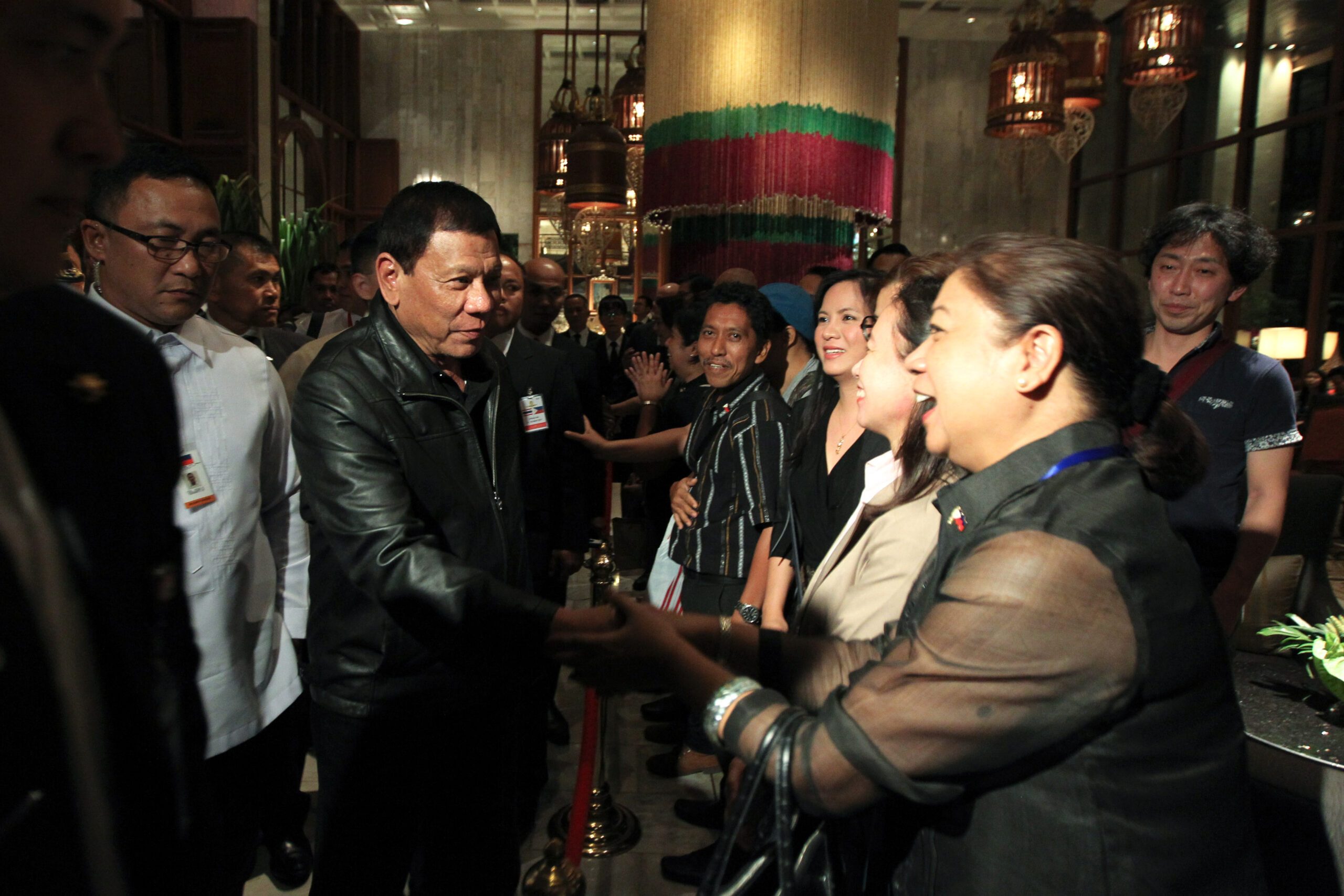 Facebook Twitter Copy URL
Copied
The President stuffs his long speech in Bangkok with jokes and insults of his critics, to the delight of many in the Filipino community present at the event

BANGKOK, Thailand – In a speech filled with even more jokes and teasing than usual, President Rodrigo Duterte made light of his supporters’ claim that Vice President Leni Robredo wants to oust him from power.

He joked that perhaps a better alternative is for Robredo to marry him instead.

(In a hurry, she wants me out. I haven’t even reached one year, you already want me out. Okay, she’s still young, okay, marry me.)

He was speaking to some 2,000 overseas Filipino workers (OFWs) based in Thailand, many of whom laughed at his joke about the Vice President.

Two of them tying the knot is as good as sharing his position as the country’s most powerful official with Robredo, he said.

(So both of us are here, at least I won’t lack someone to whisper to.)

He asked Robredo to be patient, claiming she has yet to prove herself to the Filipino people.

“Nagmamadali, maghintay ka. Wala ka pang ginawa sa bayan eh (You are rushing, you wait. You haven’t done that much yet for the country),” said Duterte.

As early as the campaign period, Duterte has been vocal about his appreciation for Robredo’s looks. Back when she was still part of his Cabinet, he had joked about her short skirt and smooth knees, jokes which Robredo found “tasteless” and “inappropriate.”

The President was on a roll that night with green jokes and insults for his critics, Senator Leila de Lima and Senator Antonio Trillanes IV.

He called De Lima the perfect “queen” for Satan and said he could kill Trillanes if he had the time.

Many among the audience were responsive to these insults. When he alluded to Robredo, many shouted, “Boo!”

As he was talking about De Lima, some could be heard shouting, “Bitay na! (Hang her!)”

One joke difficult to unhear was his “admission” that, like the babies of working mothers who breastfeed, he too goes home to breastfeed.

He started by recalling how he started a daycare and breastfeeding center for mothers who work for the city government. The workers would go there after work to breastfeed or pick up their children.

Duterte even elaborated, advising others not to breastfeed right after a woman gives birth.

(The problem is if she gives birth, don’t compete because the milk will run out. Just reserve it for another time.)

Such statements with heavy sexual innuendo are not new for Duterte. He has joked about having “short time only” with his girlfriends because of his old age and teases men about their private parts.

After hearing the President’s speech, Thailand-based OFW Michael Bayson said Duterte’s crass jokes stood out for him but he chooses to look beyond them.

“He would make jokes but if you can’t take his jokes, it’s up to you. But if you dig deeper to the point, you will get the point,” he said in a mix of English and Filipino.

The jokes don’t bother him so much because of how much he’s heard of Duterte’s brand of humor.

“I’m used to hearing those jokes [from] him. I just don’t know with other people but to me it’s all fine,” he said. – Rappler.com