Duterte on impeachment vs Robredo: ‘Stop it’ 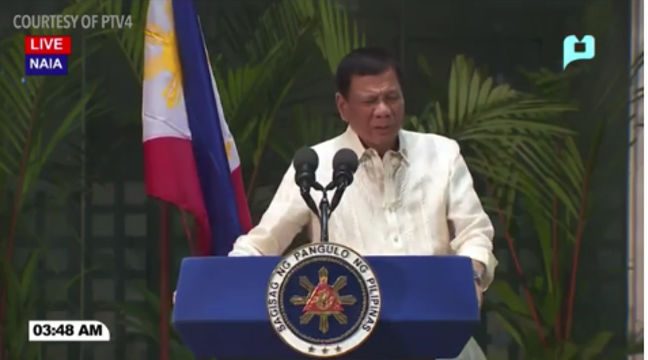 Facebook Twitter Copy URL
Copied
(UPDATED) 'Guys, lay off....You can do other things but do not tinker with the structure of the government. I will not countenance it,' the President tells those seeking to impeach Vice President Leni Robredo

Duterte explained his stance upon his return from official visits to Myanmar and Thailand.

A reporter asked Duterte about his thoughts on the impeachment complaint against Robredo and whether he thought there was any basis for it.

Duterte replied: “Guys, lay off. Stop it. You can do other things but do not tinker with the structure of the government. I will not countenance it. Elected ‘yang tao eh (She was elected).”

“Why do you have to? Is it just because she keeps on harping on me? Hayaan mo (Let it be) because this is a democracy. Freedom of speech. There are no overt acts,” he explained.

“Kakatapos lang ng eleksyon, bakit mo sisirain? Malay mo ako, ‘di na ako magising bukas sa bangungot, eh ‘di okay na, siya na (The election just ended, why do you have to bring her down? Who knows, I might not wake up tomorrow because of a nightmare, so fine, it would be her turn),” Duterte added.

Capping off his answer to reporters, Duterte said the Philippines is a democracy where “leaders are elected.”

“You know, this is a democracy. Leaders are elected. [Even if one] is a son of a bitch, it’s still the people’s choice. Remember that,” he said.

“Impeachment should be resorted to as the last card against erring high officials for serious and grave reasons. Impeachment is divisive and time consuming. It distracts from other important work,” Pimentel said, according to a dwIZ report.

The Davao del Norte 1st District Representative said the complaint could be about Robredo’s alleged “betrayal of public trust” for her criticism of the drug war in a video played at an event in Vienna, Austria.

Last Monday, March 20, two members of the Volunteers for Good Government asked Alvarez to endorse an impeachment complaint they drafted against the Vice President, citing the same video message.