Facebook Twitter Copy URL
Copied
(UPDATED) The Department of Foreign Affairs confirms in a statement that Jennifer will be released from prison and repatriated back to the Philippines in November 2018, or more than a year after her acquittal

MANILA, Philippines – Like many other Filipinos, overseas Filipino worker (OFW) Jennifer Dalquez set out to work abroad to build a better life for her family in General Santos City. But just a month before her planned return home, Jennifer was jailed for killing her male employer and was eventually sentenced to death by the United Arab Emirates (UAE) Court of First Instance.

She said she did not mean to kill her employer, because she acted in self-defense as he attemped to rape her.

More than 3 years after she was jailed, Jennifer Dalquez is finally acquitted of murder and free to come home. Here is everything that has happened to her, based on reports and information collected by Rappler:

Before working abroad, Jennifer lived with her family in General Santos City.

In an interview with Rappler, her mother Rajima Dalquez described Jennifer as a good daughter and a loving mother to her two children. Their family was barely surviving on the income of her farmer-husband  and her father’s earnings as a tricycle driver. Jennifer decided to work abroad. Jennifer flew to work in the United Arab Emirates, leaving behind her two kids who were just two years old and 7 months old, respectively, at the time. She was hired as a household worker.

Dalquez said her employer forcibly entered the bathroom as she bathed and attempted to rape her. She was able to escape and asked the wife of her employer to send her back home. 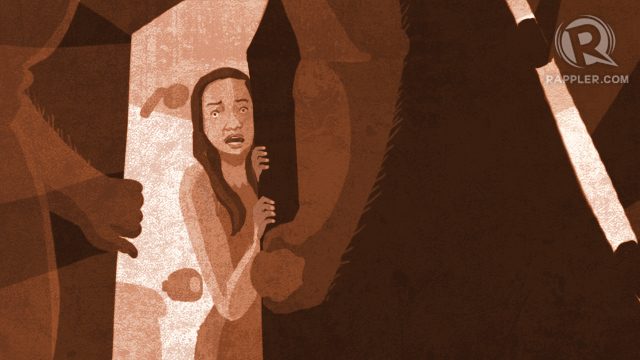 While at the airport, however, a friend offered her a job. Thinking of her children’s future, Jennifer decided to stay and work as a cashier at a restaurant.

She left the restaurant and started working as an assistant for a doctor she met when she was still a cashier. To earn more, she cleaned for different households on the side. Dalquez said she was planning to go back to the Philippines for good in January 2015.

She was hired to clean an Emirati policeman’s house. According to Dalquez, her employer tried to rape her at knifepoint. She defended herself and managed to get hold of the knife. She accidentally killed him. In an audio message sent by militant OFW group Migrante as an appeal to President Rodrigo Duterte, Jennifer narrated what happened. Listen to her story here:

Jennifer’s family received a phone call from her roommate who told them that Jennifer was arrested for killing her employer. Her parents went to the Overseas Workers Welfare Administration (OWWA)’s regional office in Koronadal City to ask for help. According to them, the agency at the time said that they still didn’t have information on Jennifer’s case and asked them to come back. Jennifer’s mother said she had to go back several times to the agency but barely got any information. She had to use the little savings Jennifer was able to send them to pay for the fare to and from the OWWA office which was quite far from their home.

Jennifer’s parents went to the Department of Foreign Affairs office in General Santos City. The officer-in-charge then also said that they did not have any information on the case.

It was only in March 2015 when the DFA finally confirmed to Jennifer’s family that she was indeed jailed for murder charges. The government, through DFA, started giving them updates on the court hearings.

The Dalquez family was finally able to talk with Jennifer on the phone. She shared the details of her case, including the news about her death sentence.

Desperate for help, the Dalquez family sought help from the media and politicians.

Jennifer’s mother Rajima said she was disappointed with how the government responded to her case. “Pinabayaan nila ang kaso ng anak ko. Kung hindi pa ako nagkalampag sa Maynila, hindi nila ako papansinin (They didn’t care about my daughter’s case. If I didn’t make noise in Manila, they would have not noticed me),” she said.

Migrante also offered to help Jennifer and tried to visit her in jail, but officials didn’t allow them to see Jennifer.

The government said it gave given legal assistance to Jennifer.

The Department of Labor and Employment (DOLE) announced in June 2015 that they were going to appeal her death sentence before the court. Her lawyer, Nasser Al Shamsi, was confident about the help offered by the Department of Foreign Affairs (DFA).

“Of course, she cried when she recounted her ordeal, and I couldn’t help but also shed tears. But she was an emotionally strong woman,” narrated Baldoz. She also said that Jennifer was in “good condition.”

In their meeting, Baldoz said that Jennifer reiterated her innocence and requested to be able to see her family. She also gave assurances  to Jennifer that her two children will receive educational assistance from the government.

Jennifer’s parents flew to the UAE with government’s help. They were finally able to meet Jennifer who told them what happened and asked them to take good care of her children.

Jennifer was able to regularly contact her family via phone calls to give updates on her case. According to her parents, Jennifer complained that their hearings were always postponed. She was also regularly talking with her two children.

Rajima told Rappler that even up to now, Jennifer’s children still did not understand what happened to their mother. All they know was that she was unable to come home.

Jennifer told her parents that the UAE Court of Appeal’s decision on her case will be released soon. The family appealed to President Rodrigo Duterte to save her from death sentence.

Jennifer herself also sent an audio message, through Migrante, to Duterte. Migrante claimed the Philippine embassy told Jennifer’s family not to approach Migrante for assistance. But the group vowed that they “will not stop until Jennifer is acquitted.”

“We have enough reasons to be alarmed. Like the previous regimes, the current administration is also guilty of criminal neglect as seen in its handling of the Jakatia Pawa case,” they said.

The National Council of Churches in the Philippines (NCCP), through Churches Witnessing with Migrants, also called for prayers for Dalquez to be spared from execution.

“We take the side of the vulnerable. Dalquez’s move was an act of self-defense. May her death sentence be commuted,” the NCCP said in a statement.

On February 23, as Congress debated the reimposition of the death penalty in the Philippines, Dinagat Islands Representative Kaka Bag-ao argued that the Philippines will lose its leverage in efforts to save OFWs on death row abroad, including Jennifer.

(While this Congress would be approving the measure reimposing the death penalty, how can the government move to defend and save around 70 Filipinos on death row abroad?)

UAE’s Court of Appeals decided to postpone its ruling on Jennifer’s case, originally set for February 27, to March 27.

The court called on the two children of Jennifer’s deceased employer to attend the March 27 hearing, where they will be asked to swear 50 times in the name of Allah before the court that “Jennifer is the only person, and no other person, [who] killed their father.”

If this happened, the Court of Appeals would uphold the death sentence. The parents of Jennifer sought the help of lawmakers to urge President Duterte to save their daughter’s life.

Six lawmakers, 5 from the Makabayan bloc, filed a resolution calling on Duterte to seek executive clemency for Jennifer.

DFA Spokesperson Charles Jose said they hoped the new pieces of evidence they had presented to the Al Ain Judicial Court would overturn the death sentence.

“We are hopeful na sana ma-overturn yung sentence niya. We entered new pieces of evidence and witnesses dito sa pag-apela niya. Sa appeal niya ay tinawag natin as witnesses yung mga crime scene investigators at tiyaka yung mga forensic experts. So hopefully these will be new pieces of evidence that will be appreciated by the judge dito sa Court of Appeals,” Jose said in an interview with Rappler.

Jose also clarified that this hearing was still not the end of the line for Jennifer, and that the government was doing everything to save her.

Jose also said that the embassy had tried to reach out and negotiate with the deceased employer’s family, but to no avail.

Other than legal assistance, Jose said they had regularly visited Jennifer in jail, helped facilitate the parents’ visits, and that the Department of Social Welfare and Development (DSWD) had given her family financial assistance.

In an interview with Rappler on March 25, however, Rajima denied receiving money from the government. But her children, just this March, were both offered scholarships.

A member of the United Kingdom’s House of Lords has written to the United Arab Emirates’ ambassador to London to ask for clemency for Jennifer.

Inderjit Singh, also known as Lord Singh of Wimbledon, asked the UAE government to give “due clemency” to Jennifer who, according to him, only responded to an unprovoked sexual attack.

“It is clear from the evidence that her action was not pre-meditated, but a desperate response to an unprovoked sexual attack,” he wrote in his letter. “I am writing to you to use your good offices to remove the threat of the death penalty and for the authorities to show due clemency.”

Justice For Domestic Workers (J4DW), a London-based group advocating the rights of migrant workers, also joined the calls for her release.

“It is sad that in our modern world, migrant domestic workers are still the most abused and exploited group of workers because of the absence of labour rights and human rights in many countries like the UAE,” J4DW Coordinator Marissa Begonia said.

The Court of Appeals of the Al Ain Judicial Court on March 27, postponed anew its ruling on Jennifer’s case.

The DFA spokesperson confirmed to Rappler that the court will rule on Jennifer’s case on April 12 instead due to the non-appearance of one of the victim’s children in the March hearing.

Philippine Ambassador to the UAE Constancio Vingno Jr said in a statement that Dalquez’s lawyer moved for her acquittal after the sons of her victim skipped the hearing they were instructed by the Al Ain Judicial Court to attend.

Vingno said that the victim’s two sons did not attend the hearing on April 12, the second hearing they had ignored since the judge called on them to appear before the court on February 27.

Dalquez was saved from the death row after a court in the United Arab Emirates acquitted her of murder, her mother said.

Rajima said her 30-year-old daughter will only have to serve 5 years in prison, then she can go home.

“Nabunutan ako ng tinik sa dibdib (It’s like a thorn was removed from my chest),” the OFW’s 53-year-old mother said on Tuesday morning.

More than a year after her acquittal, Jennifer is coming home.

The Department of Foreign Affairs confirmed in a statement that Jennifer Dalquez will be released from prison on Thursday evening, November 1, and repatriated back to the Philippines.

Alicia Dalquez, Jennifer’s mother, told Rappler that her daughter herself confirmed the news to her in a phone call on Wednesday, October 31.

She said she was also told that President Rodrigo Duterte would meet with Jennifer and the Dalquez family, but no other details were given.

“We rejoice with her loved ones as we anticipate their soon reunion to celebrate her freedom and new beginning,” the group said. – Rappler.com