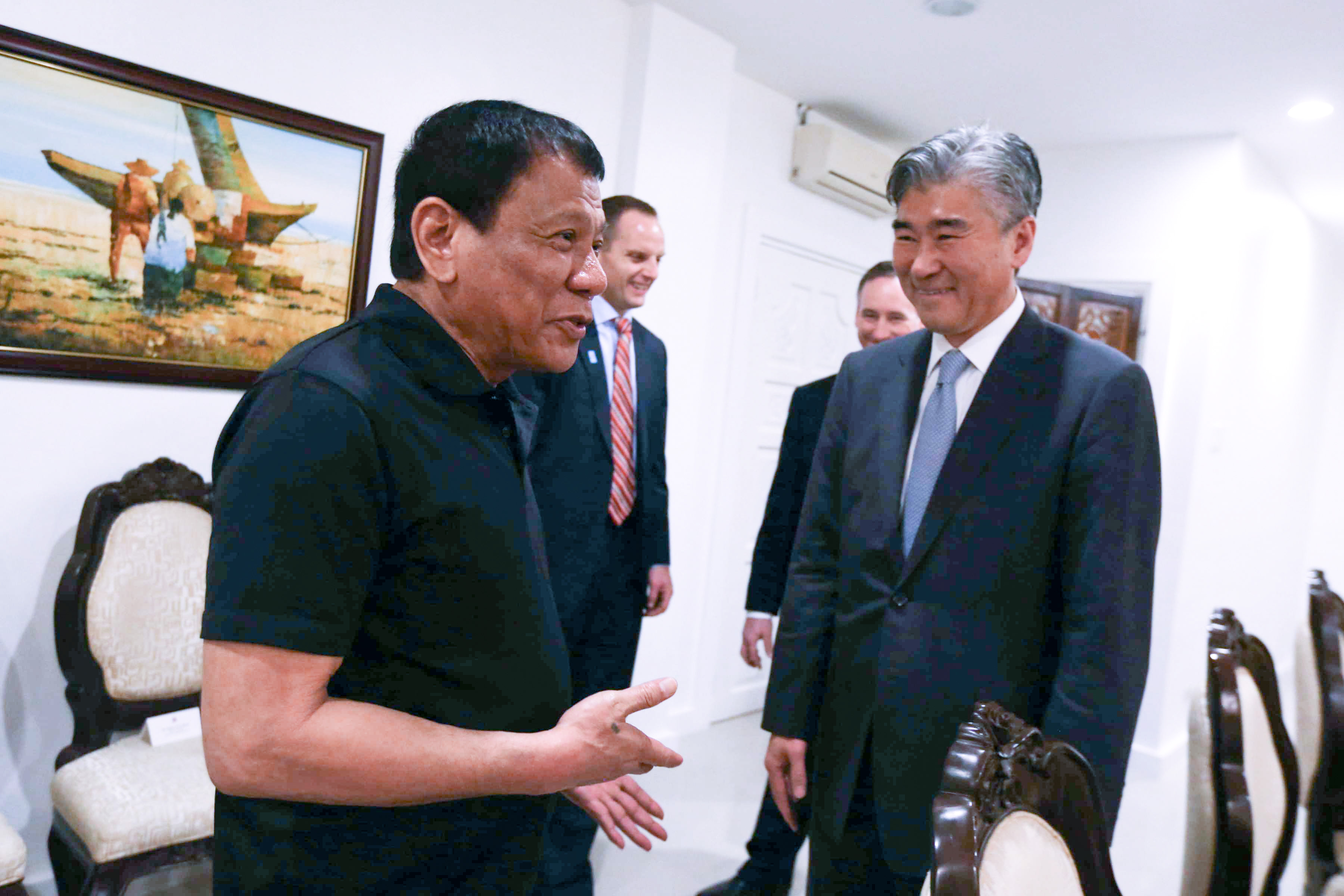 MANILA, Philippines – During President Rodrigo Duterte’s birthday eve meeting with US Ambassador Sung Kim, he apparently demanded to know why the US did not send its navy to stop China from building a runway on reclaimed land in the West Philippine Sea (South China Sea).

After first surmising out loud that their conversation is “not a confidential thing,” Duterte said that during the meeting, he told Sung: “You know, I’m surprised really, Mr Ambassador, because had America really wanted to avoid trouble early on, the newspapers showed there was something brewing there, there was a runway being built and concrete buildings on the side.”

“Why did you not send the armada of the 7th Fleet which is stationed there in the Pacific to just make a U-turn and go there and tell them right on their face, ‘Stop it’?” he continued during a speech on Wednesday, March 29, in Oriental Mindoro.

How did Kim reply? If Duterte is to be believed, the envoy said he was not involved in the South China Sea issue as a diplomat since he was then assigned to North Korea.

(The US ambassador said, “You know, that was not my assignment.” His assignment was his fellow Korean, the president of North Korea, another crazy guy.)

Duterte was referring to North Korea’s “Supreme Leader” Kim Jong-Un who continues to keep the world on its toes because of his country’s arsenal of nuclear weapons and disregard for international law.

The Korean-born US ambassador, a career member of the Foreign Service, served as the US Special Representative for North Korea Policy and deputy assistant secretary in the Bureau of East Asia and Pacific Affairs at the Department of State prior to his Philippine assignment. He also worked as US ambassador to South Korea from 2011 to 2014.

Kim, apparently to lighten the mood, also supposedly said, “I was not the one but you know, you’ve seen the gray hairs, it’s because of him,” according to Duterte.

Duterte had asked the same question when he addressed lawyers in Pasay City on March 23, but it was the first time for him to say that he had directly asked a US official about it.

It seems Kim’s meeting with Duterte was a positive one because for the rest of the President’s speech, he spoke of the US in friendly terms.

“We remain friends with America, but I am chartering a new course,” he said.

He also said he would only have a military alliance with the US, to honor the Mutual Defense Treaty signed by both countries in 1951. The two countries also have an Enhanced Defense Cooperation Agreement (EDCA).

“We cannot enter into any military alliance with any other country because of the RP-US pact which was signed by our forefathers many years ago,” he said.

In the same speech, however, he also emphasized the Philippines’ stronger friendship with China to prove his foreign policy does not “dovetail” with that of the US.

“We are at our best level of friendship with China,” he said.

Two days ago, both Kim and Chinese Ambassador Zhao Jianhua paid Duterte a visit on the eve of his birthday. – Rappler.com

IMPUNITY THE CHURCH OF THE RESISTANCE