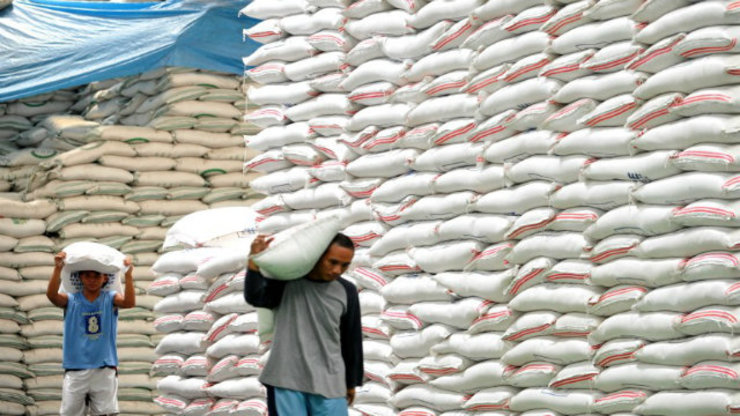 MANILA, Philippines – Former Palace undersecretary Halmen Valdez respects President Rodrigo Duterte’s decision to fire her, but appeals to him to look more closely into which policies truly benefit the farmers and which do not.

“The question in this issue is what government policy should be undertaken by the NFA (National Food Authority) which will better support our farmers,” she told Rappler on Friday, April 7.

On Wednesday, April 5, Duterte accused her of wanting to pursue a rice importation scheme that is detrimental to Filipino farmers.

Valdez said she had been merely implementing a decision already reached by the National Food Authority Council (NFAC) – to extend the deadline for the arrival of rice imports under the minimum access volume (MAV) scheme from February 28 to March 31.

The extension of permits for these MAV rice imports had been denied by NFA Administrator Jason Aquino, a retired Army officer who was once jailed for joining the botched February 2006 mutiny against then president Gloria Macapagal-Arroyo. He was eventually cleared by a military court.

“In my humble opinion, discussions on policies that protect farmers can be discussed within the NFA Council, which is comprised of very able government agencies, and not through decisions monopolized by one administrator,” she added.

Duterte, in a speech in front of Nueva Ecija farmers, claimed the permits should not be extended because the rice imports will flood the market with cheaper rice, which Filipino farmers can’t compete with.

But Valdez said the issue is much more complex.

“The MAV is part of our compliance with the WTO (World Trade Organization). It was already approved by the NFAC (National Food Authority Council) which is composed of many other officials aside from Cabinet Secretary Leoncio Evasco Jr,” said Valdez on Friday, April 7.

MAV is a scheme where private importers are given permits to import rice within a pre-determined quota.

NFA Administrator Aquino, whom Duterte seems to be siding with, refused to extend the permits of private importers under the MAV scheme.

The importers deemed qualified to be given an import permit are determined by the NFA management, not the NFAC.

Valdez defended the MAV scheme, citing improvements made by NFAC to ensure the system is less prone to abuse.

For instance, the NFAC under Evasco, cut the quota into smaller quotas to accommodate small farmer cooperatives. The move was intended to lessen the monopoly of long-time rice importers who abuse the system through cartels.

Valdez said that there are 30% more rice importers given permits under the MAV scheme compared to during the Aquino administration.

The cooperatives have a representative in the NFAC.

Valdez also said the MAV scheme has also become less prone to abuse because of Republic Act No 10845, a law that declares agricultural smuggling as economic sabotage.

The law, authored by Senator Cynthia Villar, has made it “almost impossible” for smuggling to happen under the MAV scheme.

NFA Administrator Aquino, while against extending the deadline for imports under the MAV scheme, prefers government-to-government (G2G) rice importation.

He has argued that the process is simpler and will provide cheaper rice for Filipinos.

Each time the government imports rice from another government, it must get a loan from the Landbank.

Aquino wants to import one million metric tons of rice through government-to-government transaction, which, according to Valdez, amounts to a P24-billion debt from the Landbank.

This adds to the “legacy debt” of the government already at P211 billion, whereas, under the MAV scheme, private rice importers pay for the imported rice.

Valdez also argued that government-to-government transaction is less transparent and more prone to abuse than the private-sector-led MAV scheme.

“Government-to-government scheme is exempted from the Procurement Law. Thus, the NFA management has full control on how to import the rice, on who gets contracts to facilitate the importation,” she said.

One loophole is the choice of “logistics provider” or the boat company that will transport the rice. In government-to-government transactions, scheming Filipino officials and foreign officials can make deals to ensure a specific supplier is chosen.

For this reason, said Valdez, the costs of logistics tend to be very high.

Because they get to choose the boat supplier, there’s also nothing stopping the supplier from agreeing to take on more rice imports than the amount stated in the quota, leading to “overloading” of the boats.

This is how smuggled rice arrives in the Philippines through the government-to-government scheme.

Valdez, however, clarified that she and the NFAC “are not against government-to-government transaction.”

“We’re just saying, it’s not the right time. G2G is done to prepare for a calamity, if there is a shortage in rice, or for the NFA’s rice program,” she said.

NEDA Director-General Ernesto Pernia, whose agency is part of the NFAC, agrees that there is no need right now for the 1 million MT G2G Aquino is pushing for.

G2G transaction also means the government will be paying foreign governments and their farmers for rice, instead of supporting the produce of Filipino farmers.

Another reason why the NFAC does not want to go with G2G now is the good harvest reported by farmers, which means it makes more sense to just buy locally.

“There is no shortage, and the harvest of local farmers is good, so why not just buy rice from them?” said Valdez.

For buffer stock, the Philippine government can just buy rice from its own farmers.

For opposing G2G, Valdez said she, the NFAC, and Secretary Evasco are working in the best interest of local farmers, not the other way around.

She pointed out that before Aquino was appointed on December 29, 2016, the NFAC, under Evasco, was able to maintain the price of rice.

Evasco, who chairs the NFAC as Cabinet Secretary, is seeking to remove Aquino from his post for “actively refusing” to implement decisions reached by NFAC.

Valdez also said Aquino has refused to attend NFAC meetings, and has even cancelled some of them unilaterally, making it difficult for the council to discuss contentious issues.

Despite her unceremonious dismissal, Valdez still calls Duterte “my President” and only hopes he can look into the NFA issues more closely.

“I hope he will continue his fight against corruption. He should really talk to the NFA Council and the Cabinet Secretary and look closely at the syndicate inside NFA,” she said. – Rappler.com