In Siquijor, regaining healing powers while Christ is dead Facebook Twitter Copy URL
Copied
For 7 Fridays leading to Good Friday, Siquijor's healers scour Mount Bandila-an and other sources for ingredients for a powerful concoction to be mixed and brewed on Black Saturday

SIQUIJOR, Philippines – What will you do when Christ is dead? In the Philippines, Jesus Christ dies every Good Friday at 3 pm. After that fateful time, the statue of Santo Entierro (The Dead Christ) is brought out of the churches all over the country to start the procession all around the plaza.

In Cantabon in the island of Siquijor, Noel Torremocha would have just finished gathering human bones from the cemetery in Larena village. Torremocha was insistent on using human bones. “It has to be bones or else everything for nothing,” he said in Filipino.

And the bones should not just be gathered from the tombs; they would have to be given to them, he said. Were there people in the cemetery at that hour? Apparently, they were there, waiting. The pangalap of the bones had to be done from noon till two in the afternoon only on Good Friday.

It is the culmination of the pangalap which started 7 Fridays ago.

For 7 Fridays, Torremocha and other healers would go to nearby Mount Bandila-an to gather medical herbs. They had to follow specific directions relative to the sun for every week. As the head of the Cantabon Healers, he said he knew all the names of all the medicinal herbs and where they could be found within the Bandila-an National Park.

“There could be more than 300 (herbs) now,” he said. The Department of Environment and Natural Resources (DENR) tasked his group to plant herbs within the park.

Torremocha is from Bohol. His grandfather was also a mananambal (healer). When he came to Siquijor, Torremocha served as the herbalist of Pedro Tumapon, one of the foremost mananambals in Siquijor. He worked for him for 15 years, or until Tumapon’s death 10 years ago. Torremocha married one of Tumapon’s daughters, Juanita, who followed her father’s footsteps.

Torremocha’s father-in-law was said to be a reluctant healer. As the story goes, Pedro Tumapon was gathering herbs in Bandila-an when a huge white apparition of the Virgin Mary appeared before him and handed him a librito written in Latin. He was forced to become a healer, which kept him from looking after his 10 children, mostly daughters. One day, he threw away his librito and swore not to be a healer. But the demand for his powers compeled him to return to healing, though his librito remained missing.

Around the Torremocha’s house in Cantabon were herbs already shaved and chipped, which would then be mixed, heated, and turned into a powerful concoction on Black Saturday. Two years ago, the Department of Science and Technology (DOST) conducted a research on these medicinal materials or “material medica” of the mananambal.

The Siquijor mananambals tried to be discreet about their own ingredients, as these were the ingredients used in the public pagluluto (cooking) or laga (boil) on Black Saturday. The concoctions made on Good Friday are only for the mambabarangs or witches. The residents of Siquijor are very careful in identifying the witches in the neighborhood.

“We don’t know anyone,” said our guides inside Cantabon Cave, where Torremocha presumably got his stalactites.

The mambabarangs are said to mix their igdalaut at exactly 3 pm on Good Friday, when Christ died. Ingredients of the igdalaut include 3 pieces each of mangungkong, kanomay, balalanti and bangkonay trees; 3 pieces of ginger, 3 pieces of dulaw and paloypoy, sea anemone, starfish, the poisonous part of the botete or fugu, 3 shards of a cross from a cemetery, 3 shards from a coffin, 3 shards of the skull of an unbaptized person, 3 strands of hair of a dead person, 3 fangs of a poisonous snake, 3 pieces of wasp hive, and water from the bahagbahag or sea cucumber.

The sumpa para igdalaut, which the Siquijor mananambal concocts on Black Saturday, is for their healing and to counter the power of the igdalaut or sorcery. In the huge cauldron, the herbs and other material medica infused in coconut oil and ashes of other herbs are added with blessed candles and holy water surreptitiously taken from churches and stirred for hours. The resulting paste is distributed to the other healers in the area. 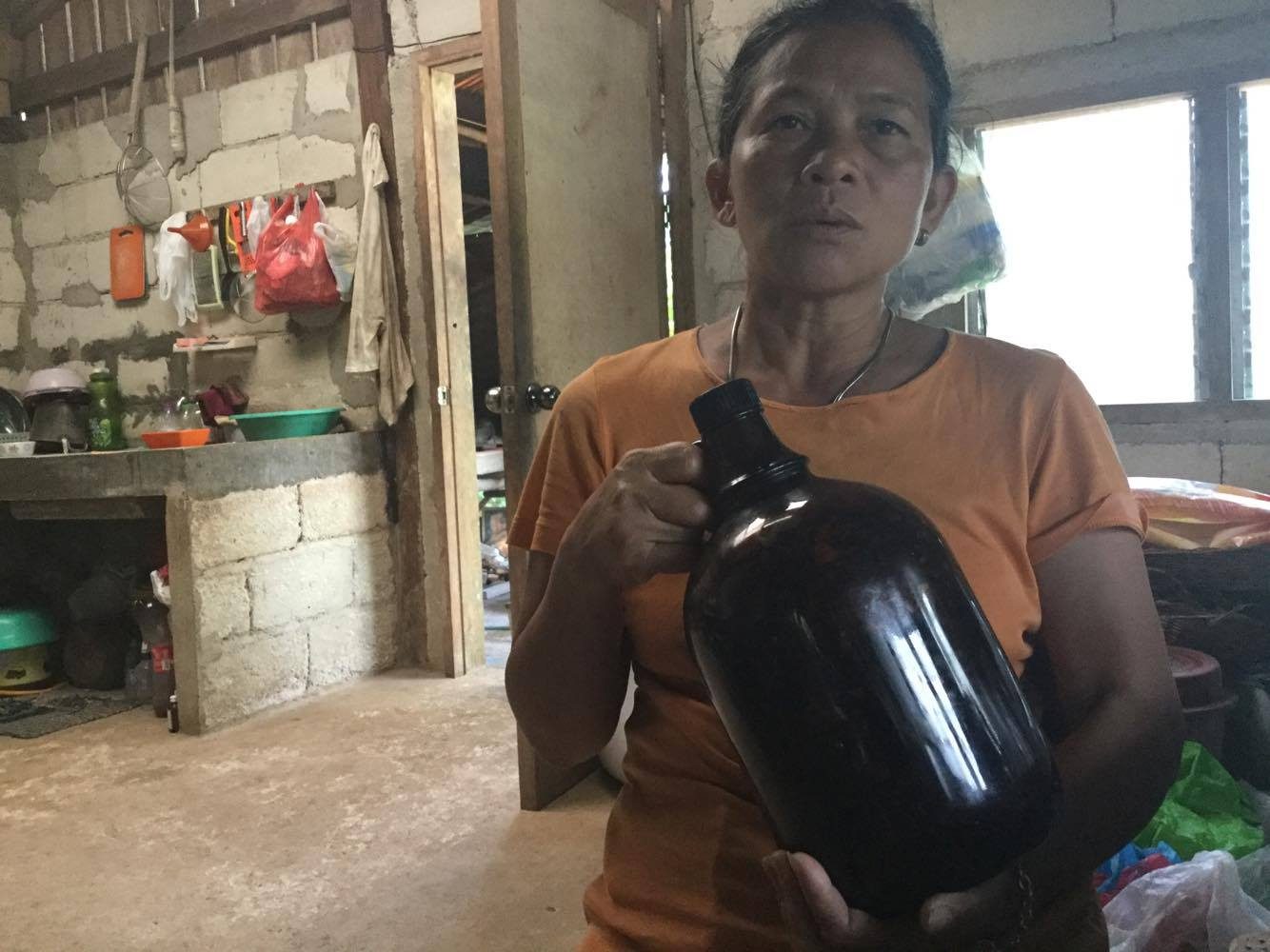 The Torremochas were allotted 3 paint cans of the sumpa, the last of which was used on us when we visited them.

Juanita used the sumpa on us for the tuob or palina. During the minor healing ritual, smoking charcoal is placed below a chair and doused with the last of the previous year’s sumpa. We were made to sit on the chair covered with a blanket.

Then she rubbed the lana or coconut oil concoction on various parts of our body and performed the tawal or blow healing. She first felt our pulse to find the ailment and then prayed in Latin. She then blew on the area where the illness was.

The lana of the Torremochas is in a 50-year-old dark glass demijuana owned by Pedro Tumapon. Many mananambals in the Visayas and Mindanao get their “starter lana” from the concoction during Holy Week. Select herbs and coconut oil are added regularly.

The local government and the Department of Tourism capitalized on the mysticism of Siquijor by holding the Healing Festival at Mount Bandila-an. Along with the mananambals and the discreet mambabarangs from as far as Zamboanga, Cebu, and Misamis who converge here to get their sumpa are the tourists and New Agers.

Maybe it’s because of this powerful convergence that this remote village of Cantabon, where the cellphone signal is almost nonexistent for most of the year, gets a full-bar free WiFi reception while Christ is dead. – Rappler.com