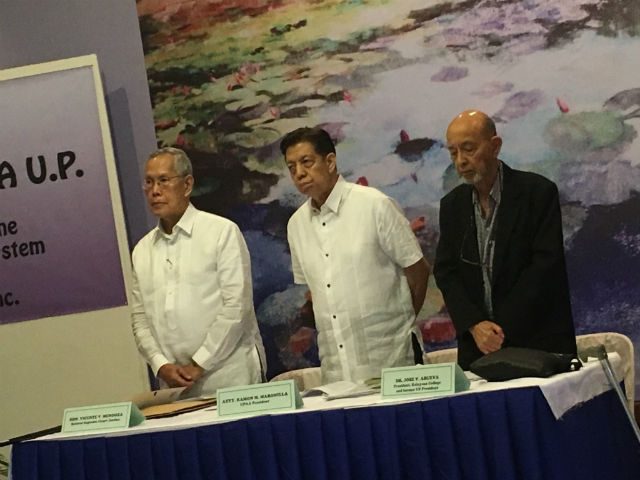 Facebook Twitter Copy URL
Copied
'If the development of the regions can be achieved by decentralization, why still make them independent states and divide the country as a result?' asks former Supreme Court Justice Vicente Mendoza

MANILA, Philippines – Two respected experts on constitutional law believe the Philippine government does not need to switch to federalism if the aim is to decentralize power from “Imperial Manila.”

Retired Supreme Court Justice Vicente Mendoza and former University of the Philippines president and now Kalayaan College president Jose Abueva spoke at the Kapihan ng Bayan sa UP on Tuesday, April 18. They discussed the pros and cons of the Duterte administration’s proposal to shift to federalism.

In his speech, Mendoza argued that the Philippines’ problem is the concentration of power in the national government that has “hampered the even development of our country.” (READ: Why federalism is not the answer)

“Decentralization, not federalism, is the remedy for such problem. Federalism is a structuring principle which is appropriate for organizing self-governing communities into a union,” said Mendoza.

“For diffusing power, the appropriate tool is decentralization, which is a managerial concept involving the delegation of administrative powers to local governments while keeping the determination of policies in the central government,” he added.

Under it, sovereignty in the Philippines will be constitutionally shared between a central governing authority and constituent political units called states or regions. (READ: Will federalism address PH woes? Pros and cons of making the shift)

These autonomous states shall have responsibility over their own laws, finances, industries, public safety, education, healthcare, transportation, recreation, and culture. (READ: How many states should PH have under federalism?)

The national government is left to take care of matters with nationwide bearing, like national security and foreign policy.

Duterte, through an executive order, has created a consultative committee to study possible amendments to the 1987 Constitution.

Mendoza argued, however, the 1987 Constitution already made local autonomy a state policy and decentralization of the government a mandate of Congress. (READ: Congress 2017: Bleak prospects for shift to federalism)

He also cited the Local Government Code of 1991, which gives local government units the power to create their own sources of revenue as well as raise, share, and use the proceeds from taxes.

“It is noteworthy that advocates of federalism urge the vigorous implementation of decentralization of powers of the national government by way of preparing the regions for statehood,” said Mendoza.

“If the development of the regions can be achieved by decentralization, why still make them independent states and divide the country as a result?” he asked.

The former SC justice suggested that Congress’ control over local legislation be reduced.

“Greater reliance on subordinate units to solve local problem is justified because they know best the problems and conditions of their areas. In addition, their share in the internal revenue collection should also be increased in view of the increased responsibilities that they will bear,” he said.

Abueva, meanwhile, prefers amending certain provisions of the 1987 Constitution instead of writing a new one altogether.

He described the Philippines as a “weak” and “soft” state, which continues to be exploited by oligarchs, political dynasties, corrupt politicians, “rent-seeking” businessmen and public administrators, gamblers, smugglers, drug lords, tax evaders, rebels who collect revolutionary taxes, terrorists, and even poor informal settlers “who occupy private or public land and use their votes to buy the protection of politicians.”

Among Abueva’s proposed amendments to the 1987 Constitution include are the following:

“Our democracy will be truly consolidated when we experience as true, real, and secure the 1987 constitutional principle in Article II, Section 1. The Philippines is a democratic and republican State. Sovereignty resides in the people and all government authority emanates from them,” said Abueva.

“Good governance in a constitutional democracy depends not only on ‘good leaders’ and ‘good citizens’ but also on ‘functional institutions,’ through which we are able to satisfy our various needs and fulfill our lives as human beings, as citizens, and as a nation,” he added. – Rappler.com