MANILA, Philippines (UPDATED) – Aldrin Laurente Napeek, a young Army trainee from Urdaneta, Pangasinan, posted on Facebook about an incident of discrimination he saw against an Igorot passenger, prompting the Land Transportation Franchising and Regulatory Board (LTFRB) to look into the claims against a bus of Solid North Transport Incorporated.

Napeek saw on Monday, April 17,  an Igorot wearing a G-string and a red Ifugao vest at the junction of Calasiao town.

The bearded man was also holding two sackbags and carrying a pasiking or native backpack.

“I secretly took photos of him because I felt proud of seeing him (with that outfit) here,” said Napeek, who is also an Igorot.

The man was with about a dozen other people waiting for a ride to Manila.

Napeek took a picture of a Solid North bus stopping at the junction. All other people were allowed inside by the bus except for the man wearing a G-string. The man apparently even ran to take the bus and grudgingly went back to where he was waiting.

“I felt like crying so I took courage to talk to him,” said Napeek.

The man was apparently a healer who had just visited a patient in Calasiao. He was supposed to go to Rosales town (also in Pangasinan) to visit another patient. 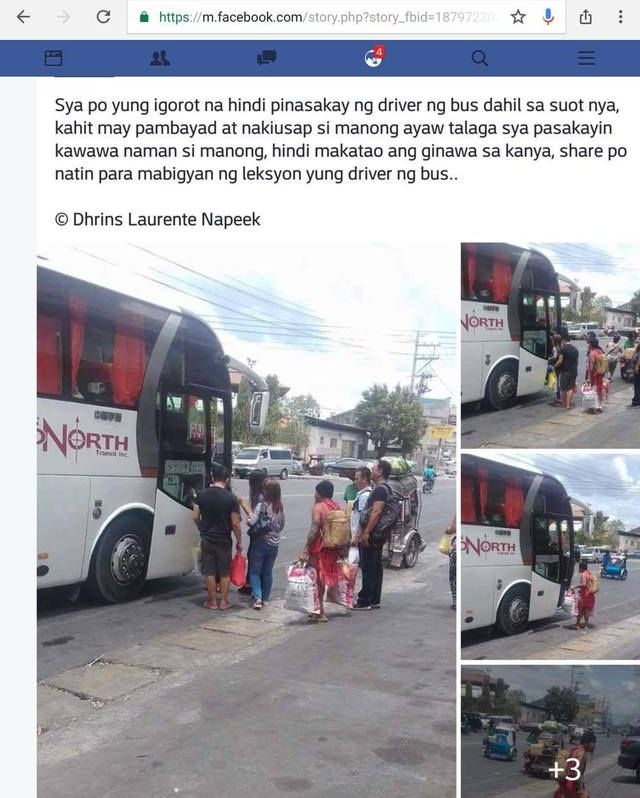 Napeek uploaded his photos on Facebook. The post became viral and was shared more than 10,000 times. It also elicited more than a thousand comments.

A post shared by a schoolteacher criticizing the man for indecency garnered 3,500 comments and was shared 2,000 times.

Napeek later deleted his post because he said he is just a concerned citizen. He also said that his father has a friend who is a bus inspector of Solid North and that sometimes he and his father were given free rides.

“I didn’t expect it to be viral. I don’t want to raise the issue further,” Napeek said.

One Facebook user that did take action was the LTFRB Citizen Enforcer. Last April 20, the LTFRB wrote the Solid North Transport Inc, asking it to answer allegations that the company committed a violation: “refusal to convey/discrimination toward a passenger.”

“Pursuant to Section 17 (a) of the Public Service Act, the Board has the power to investigate upon its own initiative or upon complaint in writing any matter concerning any public service and to require any public service to furnish safe, adequate, and proper service as the public interest may require and warrant,” said the letter of LTFRB Region I legal division officer-in-charge Carl Sha Jemimah F. Marbella.

Marbella added Solid North has 10 days to answer or its Certificate of Public Convenience will either be canceled or suspended. – Rappler.com