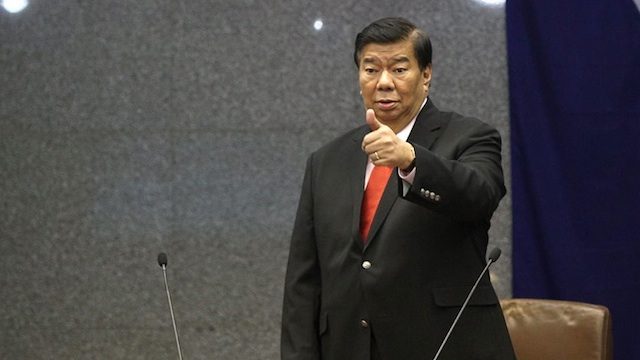 MANILA, Philippines – The death penalty bill is already “dead” in the Senate.

Senate Minority Leader Franklin Drilon said on Wednesday, April 26, that at least 13 senators are expected to vote against the measure seeking to restore capital punishment in the country.

“By my own estimate, there are at least 13 senators who will block the passage of the death penalty bill, including the 6-member minority group and 7 from the majority block,” Drilon said in a statement on Wednesday.

“It’s dead and the chances of resurrecting it before we even bring it to a vote are very slim, if not zero, at least in this [17th] Congress,” Drilon added. (READ: Senate poised to kill death penalty bill)

“Personally, I shudder at the thought that an imperfect justice system is confronted with a situation where the death penalty would have to be imposed. You cannot correct once it’s imposed,” Drilon, a former justice secretary, said in a news conference.

“We are ready to lead the fight against the death penalty bill. We believe that a death penalty law was not and will never be an effective deterrence against crime,” he said.

“It will be detrimental to the poor who will be made victims of this cruel and inhumane punishment due to the inefficiencies of our judicial system,” he added. (READ: Why the death penalty is unnecessary, anti-poor, error-prone)

“It does not appear to have the votes it needed. It is the end of the road for the proposal,” Drilon said.

But Sotto earlier said there would be more senators voting for the measure if the version passed is limited to high-level drug trafficking.

The death penalty bill is one of the priority measures of President Rodrigo Duterte. The House of Representatives earlier passed the bill on third and final reading in March. – Rappler.com