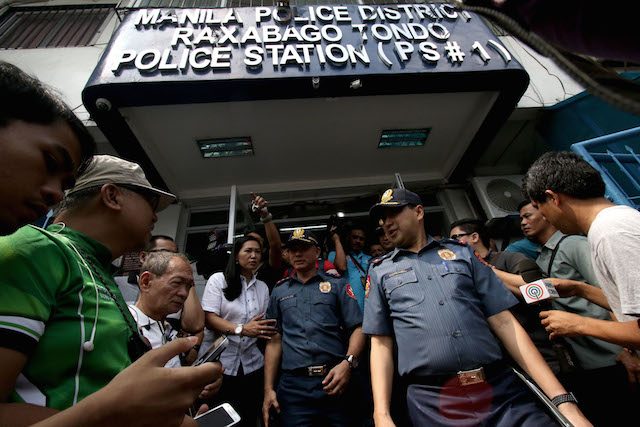 Facebook Twitter Copy URL
Copied
Senators call for ‘swift justice’ against the policemen responsible for the secret jail cell. A House inquiry is being pushed.

“I wil look into [it] this afternoon. I will call Bato,” Duterte said in a chance interview in Malacañang on Friday,  referring to Philippine National Police chief Director General Ronald dela Rosa.

He was asked about the discovery of the secret cell in Manila Police Station 1 in Tondo, when he approached media to give an interview before the arrival of Indonesian President Joko “Jokowi” Widodo in Malacañang.

On Friday, Superintendent Roberto Domingo was relieved as chief of Manila Police Station 1, along with members of his Drug Enforcement Unit, over the incident.

Domingo defended the secret cell as a means to help decongest the Manila City jail, but CHR Chairperson Chito Gascon said this was “absolutely prohibited” by the Constitution and laws such as Republic Act No 9745 or the Anti-Torture Act of 2009 and Republic Act 10353 or the Anti-Enforced or Involuntary Disappearance Act of 2012.

Lawmakers have called for an investigation into the secret cell, which was hidden behind a bookshelf and held a dozen men and women who had yet to be charged when a CHR team held a surprise inspection on Thursday, April 27.

Deputy Minority Leader and Kabayan Representative Harry Roque said on Friday that he will file a resolution seeking a congressional inquiry into incident when Congress resumes session on Tuesday, May 2.

“I find it profoundly disturbing that these men and women were 1) illegally detained – because there appears to be no records of their arrest – and 2) subjected to cruel, degrading, and inhumane conditions,” he said in a statement.

Roque said that the policemen had taken advantage of Duterte’s war on drugs to commit abuses.

Senators called for “swift justice” against the erring policemen and deplored as “unacceptable” the secret cell that was supposedly unknown even to the chief of the National Capital Region Police Office (NCRPO). (READ: Secret jail cell in Tondo? ‘We really don’t know,’ says NCRPO chief)

Senator Panfilo Lacson, a former PNP chief, likened the policemen to the very criminals they are supposed to run after.

“If true, these policemen are no better than the kidnap-for-ransom gangs that I used to chase throughout my law enforcement career. Those responsible must therefore be treated no differently from those criminals that they themselves are mandated to neutralize,” Lacson said in a statement.

He said the discovery of the unauthorized detention cell was “another big challenge” to the PNP.

“This is definitely another big challenge that the PNP leadership has to resolve with dispatch. There is no other way,” Lacson said.

Senator Paolo Benigno “Bam” Aquino III said the secret jail cell was “unacceptable” and should not be allowed elsewhere.

“If the administration’s priority is the drug war, then we need an upstanding police force. Transferring scalawag policemen to Basilan is not enough. We have to be serious about making erring policemen accountable, otherwise these abuses will continue and even flourish,” Aquino said.

Detained Senator Leila de Lima, a fierce critic of Duterte’s war on drugs, said in a statement from her jail cell in Camp Crame that the incident “mirrors the complete breakdown of the rule of law in the country.”

“Once we allowed a mass murderer to take the helm of government and carry out a criminal policy of extrajudicial killings, there is pretty much nothing else that cannot be done with impunity under his regime,” said De Lima.

Senator Francis Pangilinan, president of the Liberal Party, said this was the latest case of alleged police abuse after South Korean businessman Jee Ick Joo, the rubout of Albuera mayor Rolando Espinosa, and others done “under the guise of the war on drugs.”

“If this systemic pattern of abuse is not addressed, I am afraid the war on drugs will fail in its objective of ridding the nation of illegal drugs and instead succeed in spreading lawlessness, police corruption, and abuse,” Pangilinan said.

Duterte earlier ordered an “internal cleansing” of the police force after the alleged murder of Jee by corrupt police.

He insisted in a Thursday chance interview that corrupt police are being investigated but was vague when asked if results of investigations can be made public. – Rappler.com