Based on the Pulse Asia survey released on Tuesday, 82% of respondents trust the UN as of March 2017.

This is an 8-percentage point rise from the UN’s 74% trust rating in December 2016. This comes as Duterte condemns the UN for criticizing or supposedly interfering in his war on drugs that has resulted in the deaths of at least 7,000 Filipinos, both from legitimate police operations and vigilante-style or unexplained killings. (READ: United Nations drugs board slams killings in Philippines)

The rise in the UN’s trust rating is one of only two “significant changes in public opinion” on selected countries and international organizations between December 2016 and March 2017, Pulse Asia said.

The other significant change is the 14-percentage point rise in trust ratings of the United Kingdom. The UK scored a 53% trust rating in March 2017, up from 39% in December 2016.

Pulse Asia noted that in the December 2016 survey, the UK was labeled only as “Great Britain.” In the March 2017 survey, it was called “Great Britain/United Kingdom.”

Pulse Asia conducted the survey from March 15 to 20 using face-to-face interviews with 1,200 adult respondents. The survey has a ±3% error margin at a confidence level of 95%. 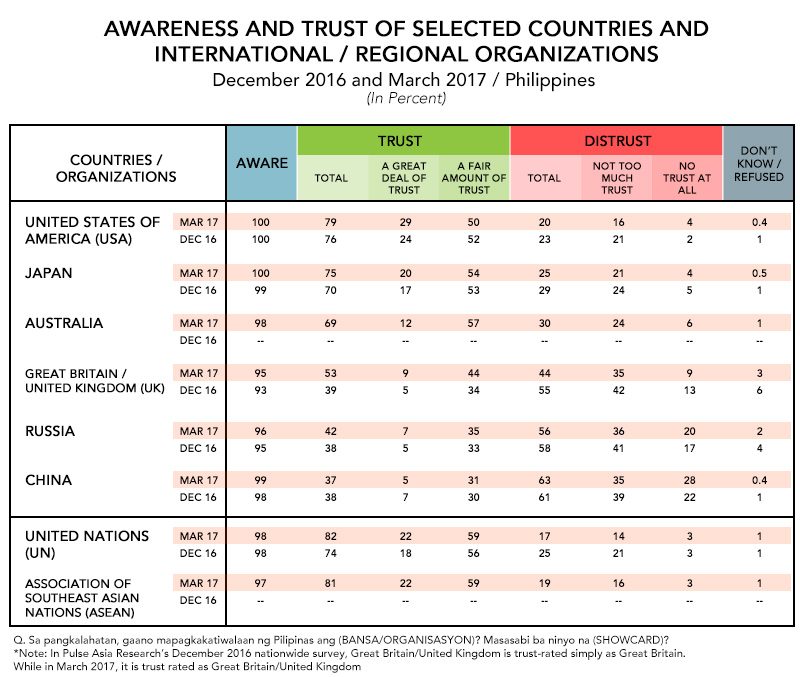 In the same survey, Pulse Asia reported that Filipinos still trust the United States, and distrust China and Russia.

This comes even as Duterte has repeatedly blasted Washington, and praised Beijing and Moscow. (READ: Duterte inspects China warships, jokes of missiles pointed to PH)

The Pulse Asia survey said 79% of Filipinos trust the US, and 20% distrust it.

On the other hand, 37% of Filipinos trust China, and 63% distrust the Asian giant.

As for Russia, 42% of Filipinos trust this country, while 56% distrust it.

In Pulse Asia’s December 2017 survey, a big majority of Filipinos also said they trust the US while they distrust China and Russia.

The two entities with the highest trust ratings in the latest survey – the US and the UN – have been slammed by Duterte for their supposed hypocrisy.

Duterte disdains the US and the UN for criticizing his war on drugs, which is killing thousands. For Duterte, the US and the UN should not interfere in his anti-drug campaign as they have their own controversies to deal with. – Rappler.com