Alert back on for South Korea rocket launch

Nov 28, 2012 8:48 AM PHT
Rappler.com
Facebook Twitter Copy URL
Copied
Parts of the country's Pacific seaboard are back on alert as South Korea plans to go ahead with a delayed rocket launch on Thursday 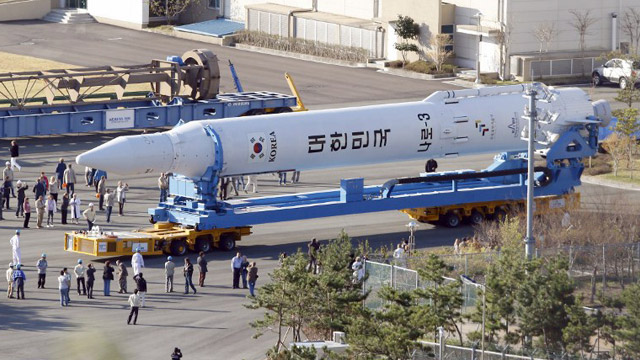 MANILA, Philippines – Parts of the country’s Pacific seaboard are back on alert as South Korea plans to go ahead with a delayed rocket launch on Thursday, November 29.

If all goes as scheduled, the 140-ton Korea Space Launch Vehicle-1 (KSLV-1) will lift off between 4:00-6:55pm (0700-0955 GMT, 5-8 pm Philippine time) from the Naro Space Centre on the south coast, the South Korean Ministry of Education, Science and Technology said last November 22.

Concerned agencies, under the supervision of the National Disaster Risk Reduction and Management Council (NDRRMC), will be under Blue Alert starting 8 am Wednesday, November 28.

Red Alert will be raised on launch day, and a no-sail, no-fly, no-fishing zone will be in effect.

In an interview on dzRH on Wednesday, NDRRMC Executive Director Benito Ramos said the following provinces are under the said warnings:

Based on information from the South Korean government, the NDRRMC is expecting parts of the rocket to fall within Philippine territory.

The payload fairing and booster rocket will fall separate minutes after the launch, and are expected to fall east of the Bicol and Samar area.

Back in October, Ramos said they were expecting several scenarios:

During the red alert period, maritime activities will be suspended, and flights will be diverted to avoid the flight path of the satellite.

For aviators, a Notice to Airmen (NOTAM) has been issued by the Civil Aviation Authority of the Philippines (CAAP) to help airlines adjust their flight plans and schedules.

In addition, the NDRRMC RADPLAN will be on standby, despite no nuclear debris expected from the launch, and the Air Force will also be available for assistance if needed.

The project, South Korea’s third bid in 4 years to put a satellite into orbit, has been plagued with problems, with failed attempts in 2009 and 2010. A successful launch this time is considered crucial to South Korea’s commercial space ambitions.

The rocket will deploy a small satellite that will mainly collect data on space radiation.

The latest launch had been scheduled for October 26, but was cancelled at the last minute after engineers detected a broken rubber seal in a connector between the launch pad and the first stage of the carrier rocket.

The KSLV-1 has a first stage manufactured by Russia, with a solid-fuel second stage built in South Korea.

The 100 kilogram (220-pound) satellite it will carry has a one-year operational lifespan and was developed by the Korea Advanced Institute of Science and Technology.

In 2009, the carrier rocket achieved orbit, but faulty release mechanisms on its second stage prevented proper deployment of the satellite.

A 2010 effort saw the carrier explode two minutes into its flight, with both Russia and South Korea blaming each other. – Rappler.com, with the Agence France-Presse