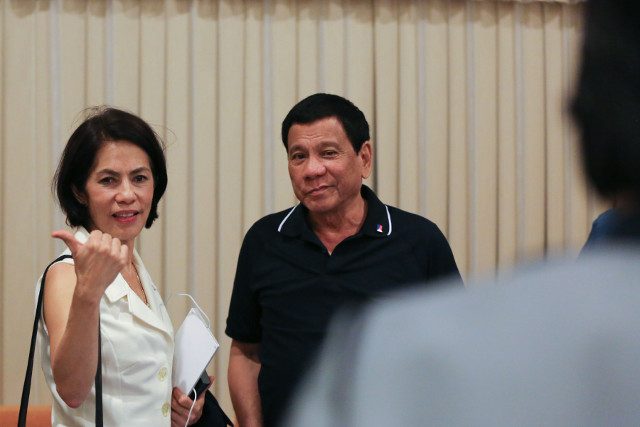 MANILA, Philippines – President Rodrigo Duterte on Thursday, May 4, attributed  the Commission on Appointments’ rejection of Gina Lopez as environment chief to the persuasive power of “lobby money.”

In a speech on Thursday, Duterte expressed sadness over losing Lopez as a Cabinet member.

“Sayang si Gina (It’s too bad about Gina). I really like her passion…But you know how it is. This is democracy, and lobby money talks,” he said in a speech at a gathering of doctors in Davao City.

The President insisted he could only do so much to keep Lopez in her post. Lopez, one of the most popular Cabinet officials, angered the mining industry because of her controversial orders related to the sector in her 10 months as environment secretary.

“I share powers and that is the process of checks and balances,” he added. (READ: Is someone lying? CA votes on Gina Lopez don’t add up)

Lopez herself thinks some of the 16 CA members who voted against her appointment did so in the interest of businesses who felt threatened by her leadership style.

As the CA held 3 confirmation hearings on Lopez’s appointment, Duterte made public declarations of support for her.

He lauded her for being “pro-poor” and said he agreed with her belief that the Philippines “can live without” mining.

The CA, however, raised many issues with Lopez, including 4 graft complaints and the concern of mining groups that she ignored due process in ordering the suspension and closure of mining operations.

Supporters of the former official have slammed the CA for rejecting Lopez, and demanded a full disclosure of those who voted against her. They said these lawmakers “betrayed” the people and blocked real reforms that would protect the environment.

Senator Panfilo Lacson, a CA member, said on Thursday that he voted against Lopez because she was neither “fit nor qualified” to be environment chief, and showed “authoritarian tendencies.” – Rappler.com