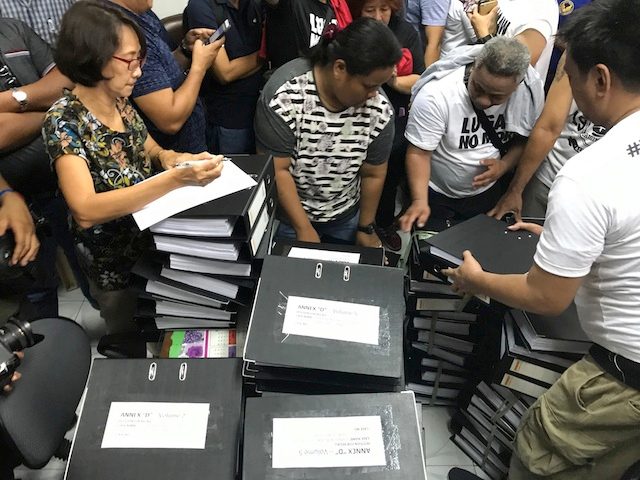 The petition was filed by Sophia Patricia Gil, Raul Sevilla, Raymond Alzona, and Jun Paul Aquino, in support of Zamora who lost to Gomez in the 2016 mayoral race.

The petitioners led the campaign to gather 30,000 signatures from the 75,255 registered voters of San Juan.

The minimum number of signatories required for the petition to be submitted is 20% or 15,051, making the signatures supposedly collected more than enough.

Zamora lost to Gomez in the 2016 elections by a little more than a thousand votes.  He has already filed an election protest with the Comelec, but he said that the process was taking too long. The poll body would verify the signatures and, once the petition is determined as sufficient in form and substance, set a date for the recall election.

“Kung magtitiwala ang San Juan ulit sa akin at gusto nilang lumaban ako uli upang maging mayor ng San Juan, lalaban ako (If the people of San Juan will believe in me and they want me to run again for mayor, I will run),” he said.

The Zamoras and Gomezes used to be political allies in San Juan. Zamora is the son of San Juan Representative Ronaldo Zamora, while Gomez has a son with former president now Manila Mayor Joseph Estrada, Senator JV Ejercito.

San Juan Mayor Guia Gomez called on the Comelec to “junk” the petition.

(The petition is defective even before it was began because they skirted the democratic system using their power and wealth.)

According to Gomez, the petitioners violated the law by bypassing supposed rule saying that they must only begin collecting signatures “a year after the elections.”

San Juan Comelec Officer Ronald Sindo, however, accepted the petition, and said that they will duly screen the “form and substance” of the appeal by counter-checking the signatures with the signatures they collected of the registered voters of San Juan.

“We will establish groups of verifiers to look at the signature to compare, because we have here specimen signatures of the voters,” Sindo said. – Rappler.com