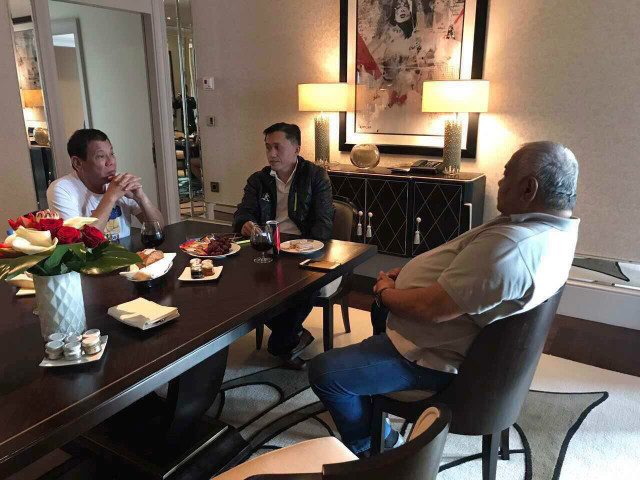 MOSCOW, Russia (UPDATED) – An hour after President Rodrigo Duterte declared martial law in Mindanao, the Palace announced he is cutting short his Russia visit and flying back to the Philippines immediately.

Presidential Spokesman Ernesto Abella said during a press conference on Tuesday, May 23, that Duterte is leaving Moscow “as soon as possible.”

The Presidential Communications Operations Office later told media that Duterte will leave Russia at 5 am on Wednesday, May 24, Manila time. He is expected to arrive in Manila at 5 pm on Wednesday.

Foreign Secretary Alan Peter Cayetano will stay behind to witness the signing of deals with Russian officials.

“I have spoken to my counterpart here in Moscow and have explained the situation and they understand that the security of the Filipino people, especially in Marawi and the whole of Mindanao is a priority,” said Cayetano during the press conference.

Cayetano will witness the signing of a defense cooperation agreement and several other deals. He will have a bilateral meeting with Foreign Minister Sergei Lavrov.

The much-awaited meeting between Duterte and Russian President Vladimir Putin, supposed to take place on Thursday, May 25, will be replaced with a phone call instead. – Rappler.com