He watched Maute Group kill a cop, then he escaped 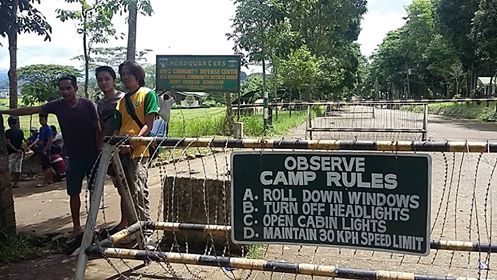 MARAWI CITY, Philippines – At the main entrance of the Amai Pakpak Medical Hospital, gunmen who attacked this city shot dead a policeman after he gestured at the security guard to shut the door.

The terrorists aimed at the guard next, fired shots in the air to signal they’ve taken over the building, and forced the hospital staff to attend to their wounded fighters.

Jan, a 23-year-old hospital employee, shuddered as he watched the events unfold real-time on the hospital’s CCTV feed on Tuesday, May 23, when ISIS-inspired members of the Maute and Abu Sayyaf groups seized villages here.

His first instinct was to run to his brother, who operates the hospital elevator, before the Maute could get to him. It was about 3 pm when it all happened, Jan recalled in an interview with Rappler.

Together with his brother, Jan spent the next hour moving from one hospital room to another, looking for the best place to hide until they found a way out. They used a plank to bridge windows on the hospital’s 3rd floor to the next building.

The brothers, both Christians, first sought refuge in a house owned by a Muslim who welcomed them even at the risk of earning the gunmen’s ire. He asked them to leave at 7 pm, however, saying he wanted to avoid angering the Maute Group.

As buildings burned and shots were fired, Jan, his brother and a few friends walked the streets towards the headquarters of the Army’s 103rd Infantry Brigade. They thought it was the safest place to be in.

He asked his wife to leave their home and bring their son to the headquarters, too, where they hope to hitch a ride with the military in going to nearby Iligan City.

Jan said he’s afraid of the “ISIS,” thus the decision to leave Marawi.

Jan was still with his family at the military headquarters last Thursday, May 25. He said he was hoping to get a ride to Iligan on Friday, May 26.

“Kahit anong sasakyan basta pauwi ng Iligan (Any kind of vehicle will do – as long as we can go to Iligan),” he said. – Rappler.com