Dela Rosa in Marawi: We must take control of the city 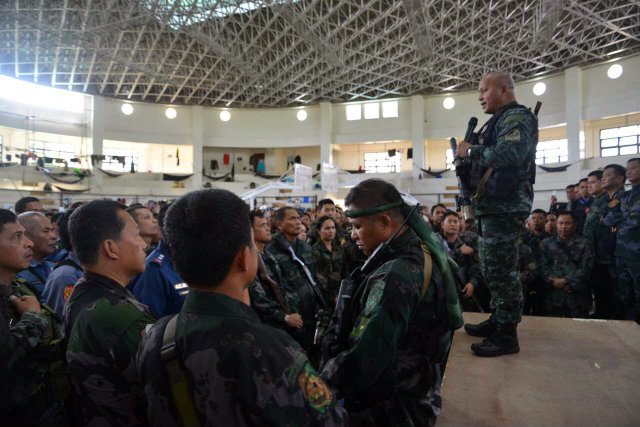 On Tuesday, May 30, the country’s top cop returned to the city not in the bright maroon and yellow of MSU but in battledress, to talk to police who are among the frontliners in the Philippine government’s operation to take back Marawi City from Maute and Abu Sayyaf fighters. (READ: How a military raid triggered Marawi attacks)

“Against the advice of my directorial staff, the deputy director [of the Special Action Force or SAF], I decided to come here at gusto ko talaga kayo makita (because I really want to see all of you),” said Dela Rosa. “‘Di ako mapalagay na nandoon ako sa aircon na opisina, nag-re-relax [tapos] kayo rito nahihirapan (I’m uneasy staying in my airconditioned office, relaxing, while my fellow policemen are enduring hardships).”

Personnel from the local police office, the SAF, and the Regional Public Safety Battalions of the Autonomous Region in Muslim Mindanao (ARMM), Northern Mindanao, and Soccsksargen regional police office are currently under the operational control of the military in the area.

Dela Rosa flew in from Manila on Tuesday, accompanied by other top officials of the PNP. “I have to come here,” he told media in a chance interview.

The threat of the Maute Group is familiar to Dela Rosa. During his visit to MSU Marawi last January, members of the terrorist group attempted to plant an improvised explosive device. The military foiled the plot.

The Maute Group also planned to assassinate Dela Rosa while he attended the commencement exercises of the university, where he was guest of honor and speaker. That plot was thwarted, too.

The MSU campus is close to the area where police and military forces launched a “surgical operation” against Abu Sayyaf leader Isnilon Hapilon.

Government troops were later surprised to find that the terrorists and their sympathizers had already infiltrated the city.

For country, for family

Dela Rosa was a scholar of MSU Marawi and was about to enter his fourth and final year of college when he decided to enter the Philippine Military Academy (PMA).

Most of Dela Rosa’s career had been spent in the Davao Region and in other parts of Mindanao. In his speech to the men and women of the PNP, Dela Rosa called on them to unite and let patriotism rule above all. (It doesn’t matter if you’re Muslim, Christian, Bisaya, Maranao, Tagalog, or Ilokano – we are one here because we wear the same uniform. We belong to the Philippine National Police. We all feel the same way today.)

At least 3 cops have died since clashes began on May 23. The PNP has yet to reach several of its personnel who were inside Marawi City when the clashes began.

(There were those who were unable to leave, especially local police in Marawi City who live downtown, we lost contact with them. We do not know if they were caught or if they’re hiding now.)

Police have yet to retrieve an armored personnel carrier that was left behind in the heat of battle.

Dela Rosa also reminded police to call their loved ones and give updates amid the ongoing clashes.

(Contact your family and tell them you’re okay, because the worry over your presence here is double or triple for the ones at home. So you need to call them to relieve the stress.)

After clashes erupted a week ago, President Rodrigo Duterte placed the entire Mindanao under martial law for 60 days. Any extension has to be approved by Congress, while the Supreme Court can review the basis for the declaration if a petition is filed against it.

Defense Secretary Delfin Lorenzana is the martial law administrator while Armed Forces of the Philippines (AFP) chief General Eduardo Año is the implementor. Although the PNP is outside the AFP’s command structure, Dela Rosa has been asked to work alongside Año to implement martial law. – Rappler.com