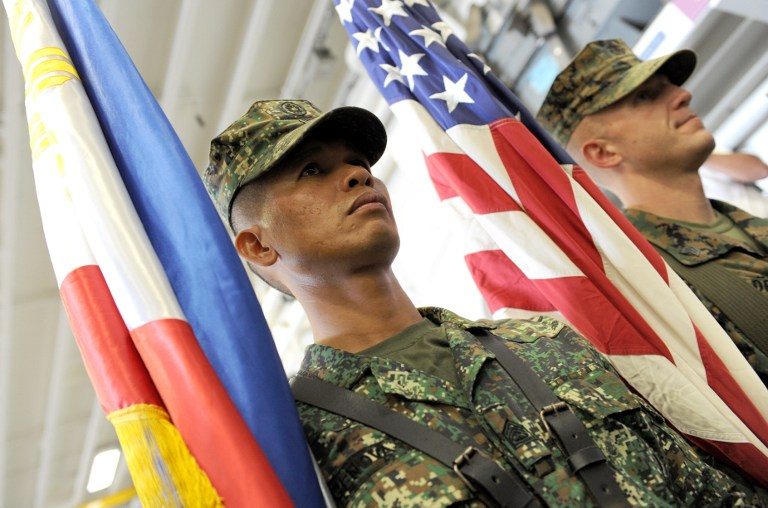 Facebook Twitter Copy URL
Copied
'We are involved in activities in Mindanao to help the Armed Forces of the Philippines take the fight to ISIS in the Philippines,' US Pacific Command Admiral Harry Harris says

SINGAPORE – While President Rodrigo Duterte appears to have distanced himself from the United States and recalibrated toward China and Russia, Philippine and American officials emphasized that the two nations’ military relationship remains the same.

Speaking to participants of the Southeast Asia Young Leaders program here, the Commander of the US Pacific Command, Admiral Harry Harris, said nothing has changed under Trump’s administration, adding that its “America First” policy is no different than individual ASEAN countries’ priority of domestic issues.

“I believe that we are in a very good place with regard to military to military activities in the Philippines,” he said on Sunday, June 4.

According to Harris, the US is very much involved in the Philippines’ counterterrorism efforts against the Islamic State (ISIS).

“As far as the Philippines is concerned, I think we have good relations with the United States. The Balikatan just concluded. It will continue because this is a part of our Philippine alliance with the US. We have a Mutual Defense Treaty,” David said.

He also said Duterte’s approach toward China does not mean the Philippines is moving further away from its longtime ally.

The statements come as clashes in Marawi City, which started on May 23, continue between the military and local terrorist groups Abu Sayyaf and the Maute Group. This, after the military moved to hunt down Abu Sayyaf leader Isnilon Hapilon, who had been spotted in the city.

The military said the raid served to foil a terror plan to seize Marawi City. The ISIS-claimed fighting has killed soldiers, terrorists, and civilians, and prompted Philippine President Rodrigo Duterte to declare martial law in Mindanao.

In 2016, ISIS, via a 20-minute video, called on its followers in Southeast Asia to fight for the terror group either in Syria or in the Philippines.

Given the developments in the country, analysts agree it is crucial for the Philippines to keep its alliance with the US strong.

Tim Huxley, executive director of IISS-Asia, told Rappler it is “necessary” for Manila to stay close to Washington.

A day earlier, US Defense Secretary James Mattis also emphasized the US’ commitment to the Philippines, reassuring the country of continuing partnership and support. – Rappler.com