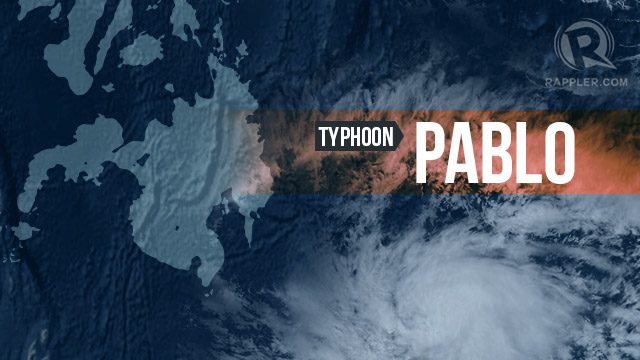 MANILA, Philippines – His Cabinet standing beside him, President Benigno Aquino III himself on Monday evening, December 3, led the call to prepare for serious disaster on the eve of the full onslaught of Typhoon Pablo (international codename: Bopha).

The President noted Pablo will likely make landfall between 4 to 6 am on Tuesday, December 4. The Philippine Atmospheric, Geophysical, and Astronomical Services Administration (PAGASA) expects this to happen in Hinatuan, Surigao del Sur.

PAGASA has placed at least 10 areas under Storm Warning Signal No 3, including the two Surigao provinces.

Aquino said some residents doubt if there is a typhoon in the first place. He said residents, for example, cite the sunny weather in their areas, echoing an observation by disaster officials who earlier said people hesitate to evacuate.

Pablo is 600 kilometers in diameter, according to Aquino, and what people see likely covers only 25 miles. “Maliit na maliit po ‘yan,” he said. (That is a very narrow view.)

Aquino thus urged affected residents to evacuate as soon as search and rescue teams, as well as their local government units, advise them to. (Watch more in the video below.)

Once criticized for supposedly missing in action during disaster, Aquino enumerated the preparations by government agencies for Pablo:

Earlier on Monday, the Department of the Interior and Local Government said it has activated monitoring teams in regions that Pablo will hit hardest.

In a separate press briefing, National Disaster Risk Reduction and Management Council executive director Benito Ramos discouraged the media from comparing Pablo to Tropical Storm Sendong, which killed over 1,470 and affected over a million other Filipinos in 2011. (Watch more about Sendong below.)

“Let’s give a chance for our people to discern (the information). So I will not give them unnecessary alarm,” Ramos said.

Sendong sustained maximum sustained winds of 100 km/h while Pablo is packing winds of 175 km/h, based on PAGASA’s 5 pm update.