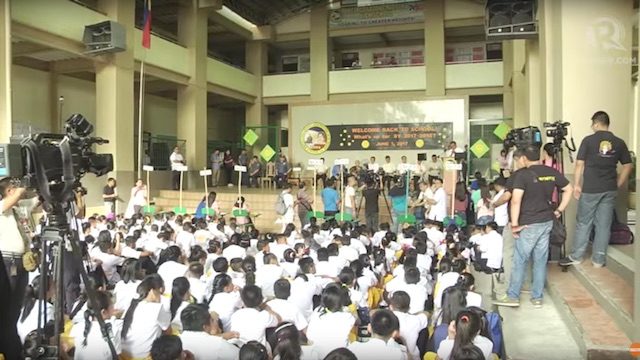 MANILA, Philippines – Over 20,000 learners have been displaced by the ongoing clashes between government troops and local terrorists in Marawi City, according to the education department.

Because of this, an influx of transferees is expected in schools located near Marawi City and in other parts of the country.

Education Secretary Leonor Briones urges all schools to welcome them with open arms.

Old problems like classroom shortages hound the first opening of classes under the Duterte administration.

But there are new challenges too, such as the displacement of students affected by the conflict in Marawi City.

Today, he is enrolling 3 of his children at President Corazon Aquino High School in Manila.

His eldest, a senior high school student, was in Marawi when clashes between government troops and the Maute Group erupted two weeks ago.

(When fighting broke out they were there in Marawi. I called them up the next morning, and it turned out they had left and gone to town through Allah’s mercy, they had left in time.)

His children will now live in Manila with him and study here, away from the chaos of Marawi.

The education department estimates that over 20,000 learners have been displaced by the ongoing clashes in Marawi.

She wants the Marawi students back in school as soon as possible.

(We want them to finish. If they enrolled in Manila, or Quezon City, we want them to continue their education so it is not disrupted for the child who goes through adjustments. Moving requires more adjustments, new set of friends, new teachers, so we want to reduce the trauma and the pressure on children as much as possible.)

JEE GERONIMO, REPORTING: The conflict in Marawi is not yet over, and Mindanao is still under martial law.

Education officials see the opening of classes as a step closer to normalcy for children who should be in schools and not in evacuation centers.