De Lima in jail: ‘I never imagined Duterte would be this vindictive’

Jun 19, 2017 10:00 AM PHT
Camille Elemia
Facebook Twitter Copy URL
Copied
‘Everything had to happen the way they happened. I had to be the counterweight to the selfish, inhumane, and reckless leadership of the Duterte administration.’ 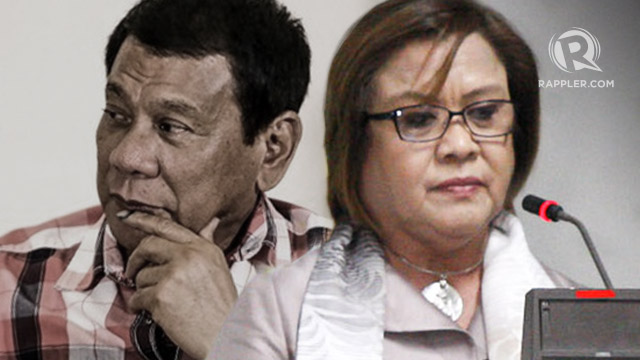 MANILA, Philippines – If there’s one promise President Rodrigo Duterte made sure to keep in his first year in office, it was to put behind bars his fiercest critic, Senator Leila de Lima. (READ: Duterte: De Lima will surely go to jail)

It was a reversal of fate unlike any other. From being a sought-after election lawyer, human rights commission chief, and Department of Justice (DOJ) secretary, De Lima is now confined in a tiny, humid prison cell, heavily guarded by police and closed-circuit television cameras everywhere, over drug charges.

As Commission on Human Rights chairperson, she probed Duterte in 2009 for his alleged links to the so-called Davao Death Squad. Eight years after, she is still reaping the seeds of Duterte’s “revenge” as she calls it.

Common friends and acquaintances repeatedly warned De Lima to slow down on her criticism of Duterte when they were both elected to office in 2016, but the senator refused to heed them. She said she had expected the “strong wave” of backlash, only to realize later on that the worst was yet to come.

“But I never, for a single moment, ever imagined that he would be this vindictive. I never anticipated that I would be imprisoned ever. I was a DOJ secretary. I was putting people behind bars. Now, I am here. Prinoject ako (It was their project to bring me down),” De Lima told Rappler recently.

“Dati pa s’ya may galit sa akin, lalo ko pang ginalit (He had held a grudge against me, and then I angered him all the more) with the Senate hearing, plus [Edgar] Matobato, [Arturo] Lascañas. He really got pissed off. I knew he would not be taking it sitting down but not to this extent,” said the senator. She was referring to the two witnesses who implicated Duterte in summary executions when he was Davao City mayor. 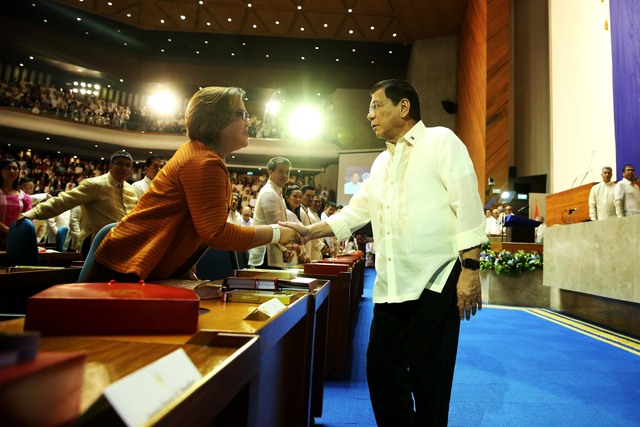 Those who visit De Lima are pleasantly surprised to see the embattled senator in her usual feisty and upbeat self. Some visitors said the senator faced them looking not an inch as a detainee, but more as a host. De Lima has repeatedly said she does not want to give her critics the satisfaction of seeing her suffer.

But how long will the ordeal last, nobody – not even the senator – could answer definitively. It is a reality she has accepted early on.

“Each day I spend here, I’m getting less and less confident that I will be freed” she said. “I don’t think he can afford that I be released at this time. It will be a huge blow to him. He is projecting to be a strongman. It is a huge slap on his face.”

Nevertheless, the senator said the fight is far from over. Asked if she has forgiven the President, she said the time for that has yet to come.

“There is a time to forgive. And this is not that. This is the time to keep on fighting for truth, justice, human rights, and the rule of law. I have to keep myself focused on what needs to be done, what needs to be said, and what our people need to know. Everything else is a luxury I cannot afford to engage in,” she said.

For a career woman who had been used to the fast-paced life, she has no choice now but to slow down, “read and reflect” to no end.

“It’s a very routinary daily life now for me,” De Lima said when asked to describe what her usual day inside the Philippine National Police Custodial Center in Camp Crame.

It’s a simple life inside her cell. She has her own bathroom, a single bed, a stand fan, a table and chair, 4 small plastic boxes for her clothes, a full-length mirror, a pail of water, a dipper, a hot-and-cold water dispenser, and a tiny cooler, which her staff fills with store-bought ice every day.

Her staff brings her homecooked food daily, for fear of her being poisoned with food served at the custodial center.

“I am not complaining because this is a relatively livable life compared to those inside ordinary detention [facilities],” she said. 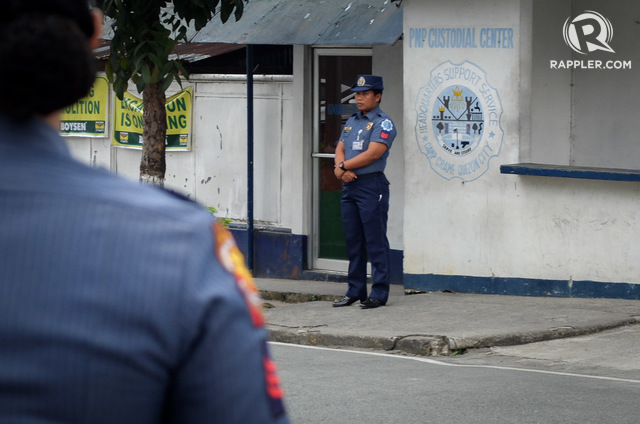 Her day usually starts at 5 am. The senator says she does walking exercises and calisthenics in the morning before taking her breakfast. This is also the time for her to read newspapers and printed online news stories prepared by her staff.

De Lima also spends most of her time reading books. At present, she is into John Grisham’s Rogue Lawyer.

She tries to get on with her duties as a legislator by filing bills and resolutions, but she is prohibited from voting on measures. (READ: De Lima to seek court nod to join Senate debates)

“Then back to reading and working on documents delivered to me by my staff the previous day. There are days when I hold meetings with my key staff, individually and collectively,” De Lima said.

All these she does manually, as computers, laptops, and mobile phones are prohibited inside.

“I take power naps, 30 to 45 minutes, once in a while, in between long-hour readings. Visitors, mostly in groups, would come during visiting hours,” she said.

The senator meets her visitors in a “visitor’s hall,” which was painted and constructed ahead of the Inter-Parliamentary Union’s visit to check on De Lima’s condition in May.

By 5 pm, when visitors are made to leave, she’s back to having only stray cats for companions. It is the time when reality haunts her the most.

“This is the time when I’m most focused on my reading – various books, from serious to light stuff. I’m most vulnerable to my emotions right before bedtime. Sometimes, I cry when I say my final prayer for the night,” she said.

It was also in jail where the senator tried new things. She has considerably lost weight because of exercise and has tried a different or, in her own words, “shocking” hair color.

In one of her notes after minority senators visited her, De Lima wrote about how her colleagues must have been surprised with her “very short” haircut with matching “striking color.” It was a mixture of shades of orange, red, and yellow.

As if the ironies are not enough, De Lima is staying in the same custodial center as former senators Bong Revilla and Jinggoy Estrada, whom she charged for the multibillion pork barrel scam when she was justice secretary.

Asked about it, De Lima said she has not seen them, as their cells are on the opposite end of the compound.

“No. I don’t even know where exactly they are in this facility. I don’t think seeing and talking with each other will ever happen. It’s my preference,” she said.

De Lima has been away from her 84-year-old mother, two sons, two grandchildren, and the rest of the family for almost 4 months now. Her youngest, Israel, has a special condition that needs her care, she said. 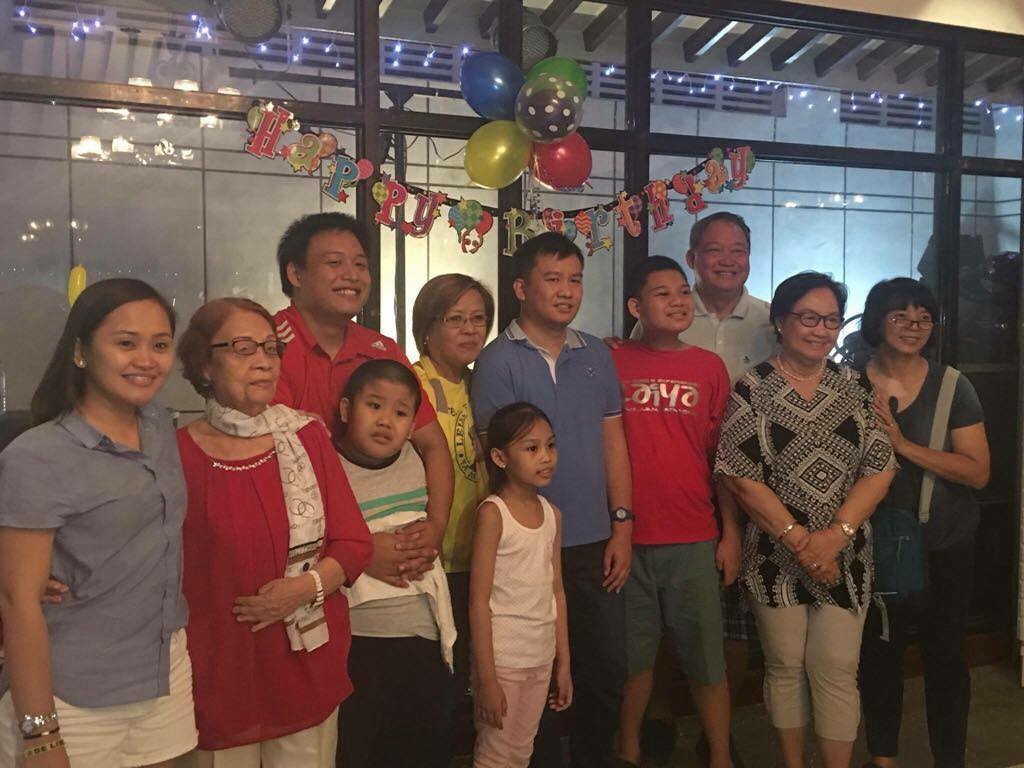 In her “dispatches from Crame,” a series of handwritten letters from detention, the senator has spent considerable time talking about her family and how they serve as her “inspirations” inside.

To this day, her frail mother has no idea she is in jail. It was a difficult decision the senator and her siblings had to make. They’ve given several excuses – from her supposed extended work-related seminars abroad to her “schooling” in the United States. (READ: De Lima’s ‘dilemma’: Her 84-year-old mother)

Her son Israel would visit her 2 to 3 times a week. Each Sunday is also a reunion of sorts for the family as they spend the whole day with her, eating together, and celebrating mass usually officiated by Father Robert Reyes.

On Mondays, when visitors are prohibited, De Lima gets to spend the whole day with her favorite dog, Coco. The senator has 12 more dogs of various breeds, but the 6-year-old Japanese Spitz is her favorite. 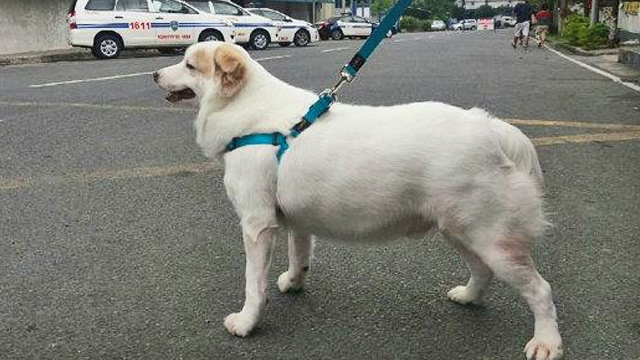 Losing friends but not hope

It was not an easy fight. De Lima said her struggle against the popular President has revealed who her real friends are.

“As I said before, I’ve lost some friends when I renewed my crusade against summary killings by filing a resolution last July 2016, calling for a Senate probe into EJKs. More friends, and even a few relatives and fraternity brothers and sisters, distanced themselves from me when Duterte started attacking me,” she said.

“But I gained new friends, new supporters, and these are people I don’t even know or hardly know. Many of them visit me regularly.”

De Lima said that aside from Duterte’s personal grudge against her, the President must have known that she was an “easy target.”

“Marami akong so-called tinapakan (I stepped on too many toes). I have more enemies than friends so to speak. I have no political backing. Although I’m from the Liberal Party, I am just a mere member. I came from a modest family,” she said.

Despite this, De Lima has not lost her hope and strength, as she insists on her innocence.

The senator has filed a petition before the Supreme Court, seeking to nullify the drug charges against her. While the outcome remains uncertain, De Lima said she has full confidence in the High Court.

Critics, however, pointed out that De Lima herself defied the SC in 2011 over the temporary restraining order issued in favor of former President Gloria Macapagal-Arroyo. (READ: De Lima’s fate: Karma or political persecution?)

Still, she has no regrets because she has “done nothing” wrong to be imprisoned.

“I have no regrets. I am at peace. I know I have done nothing to deserve to be charged and imprisoned, except to stand up for what is right. How can I regret that?” De Lima said.

“It just means that everything had to happen the way they happened. I had to be the counterweight to the selfish, inhumane, and reckless leadership of the Duterte administration. I believe nothing I have done, or will continue to do, will be in vain,” she said.

De Lima refuses to speculate further on the future of her case. But she is more than grateful for the support of the international community – without it, she said, her situation could have gotten worse.

In fact, months before and during her detention, De Lima has actively granted interviews with foreign media organizations.

“Though they may not have any influence over my case, at least they may be important catalysts in the bigger fight against human rights violations and impunity in this country. By helping restore the rule of law, perhaps I can have better chances of being given a fair trial or assessment of the merits of the cases against me,” she said.

In the meantime, the detained senator is left with no option but to wait and hope. – Rappler.com