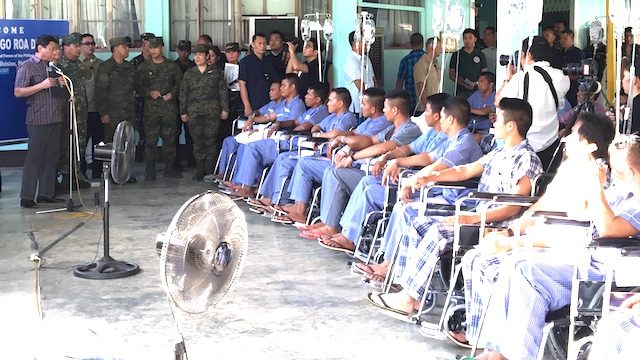 President Rodrigo Duterte grudgingly thanked the Americans on Sunday, June 11, for their assistance to the military in Marawi City, emphasizing that he wasn’t the one who asked for their help. (READ: U.S. provides ‘technical assistance’ to troops in Marawi – AFP)

The President insisted the Philippine military can handle the crisis in Marawi on its own. He looked at Armed Forces of the Philippines (AFP) chief General Eduardo Año, who nodded to his statement.

But Duterte said his quarrel was only with former US president Barack Obama, who had criticized his bloody war on drugs.

The Philippines and the US are longtime allies, bound by the Mutual Defense Treaty and the Visiting Forces Agreement.

Duterte previously threatened to repeal these treaties altogether in his bid to strengthen relations with China and Russia, his preferred allies.

In Cagayan de Oro, Duterte recognized close ties between the Philippine military and their American counterparts.

Presidential Spokesperson Ernesto Abella, in a statement on Sunday, emphasized that the US’ help in Marawi is “limited to technical assistance.”

“We have standing protocols which are already in place under the Mutual Defense Board-Security Engagement Board with the US under the purview of the PH-US Mutual Defense Treaty of 1951. It does not involve any boots on the ground nor is there any direct participation in combat operations, a matter prohibited by law,” Abella said.

“The fight against terrorism, however, is not only the concern of the Philippines or the United States but it is a concern of many nations around the world. The Philippines is open to assistance from other countries if they offer it,” he added. – Rappler.com