Duterte gives P110,000 to each soldier wounded in Marawi Facebook Twitter Copy URL
Copied
President Rodrigo Duterte has made it a habit to visit soldiers wounded in the battlefield, something that troops have come to anticipate

CAGAYAN DE ORO, Philippines – One by one in front of 80 wounded soldiers and a cop – most of them on wheelchairs – President Rodrigo Duterte raised his hand in salute.

Duterte bowed to pin medals on their chests on Sunday, June 11, while staff distributed to each of the soldiers a mobile phone, a pistol, and money amounting to P110,000. 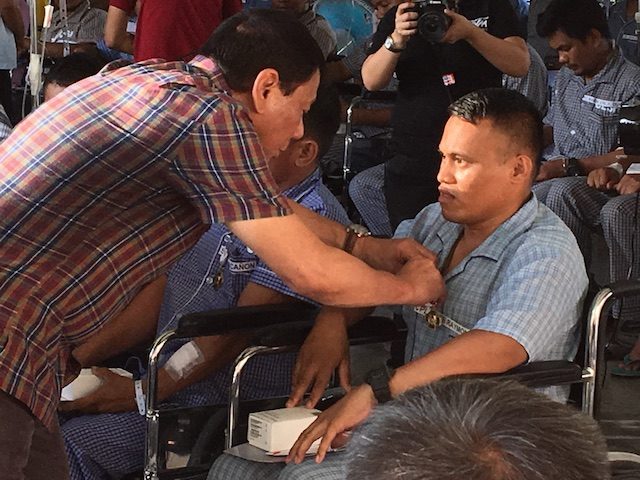 On the front row were the wounded Marines, from the unit that lost 13 men in a fierce gunbattle with terrorists last Friday, June 9.

But most of the wounded soldiers in the camp were Scout Rangers. There was one from the Philippine National Police (PNP).

Most of them sustained shrapnel wounds.

Duterte has made it a habit to visit soldiers wounded in the battlefield, something that troops have come to anticipate.

“Kinakabahan ako kaunti. Hindi ko po alam ano isasagot ko kapag tinanong ako (I’m a little nervous. I don’t know what to say if he asks me a question),” said a soldier who sustained a shrapnel wound on his right thigh.

He proudly raised his hand in salute to Duterte when it was his turn to get a medal.

Sunday marks Day 20 of the Marawi crisis. Generals shrugged off an earlier pronouncement that the crisis will end on Monday, June 12, when the country celebrates Independence Day.

While the generals celebrated the arrest of Farhana Maute, funder and mother of the notorious Maute brothers behind the siege, they admitted that enemy snipers remain a challenge in the combat zone. (READ: Who is Farhana Maute?)

Meanwhile, Duterte claimed he hated having to declare martial law in the entire Mindanao. He said it was necessary because of how terrorists have easily moved from one province to another. – Rappler.com