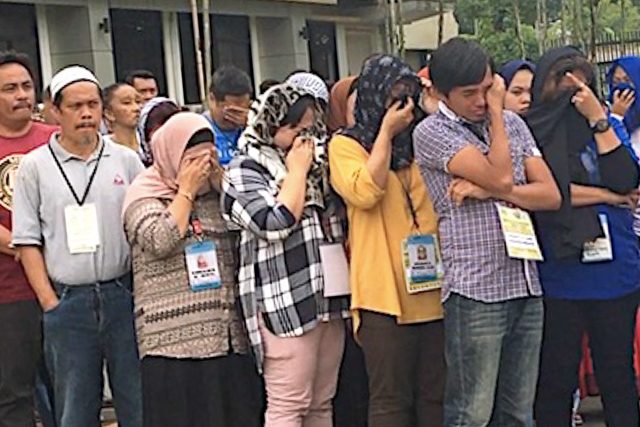 At the Marawi City Hall, Mayor Majul Gandamra asserted that government forces would defeat the terrorists.

“We will not allow any group to overthrow government,” Gandamra firmly told Rappler.

But he teared up talking about the devastation in his city.

“As much as I wanted not to show my emotions… Pero ‘yung devastation na naramdaman ng aking mga constituents ay talagang napakabigat sa akin (But the devastation that my constituents have experienced is really weighing heavily on me). But we will rise up again,” Gandamra said.

The fighting is concentrated in Banggolo, the business district of Marawi which is only a few hundred meters from the city hall. Clashes, however, also continue in a few other barangays.

On Monday, Gandamra started meeting constituents at the city hall. It was some semblance of normalcy even if explosions could still be heard loudly from his office.

At the provincial capitol, Lanao del Sur Vice Governor Mamintal Adiong Jr also teared up as he apologized to the evacuees suffering as they celebrate Ramadan.

The flag-raising ceremony is symbolic, Mueco said, as he recalled how he and his men faced life and death situations when the clashes started.

Majority of Marawi’s 200,000 residents have evacuated the city.

Local terrorists earlier failed in their bid to raise the black flag of the Islamic State (ISIS) in both the provincial capitol and the city hall.

The provincial capitol has served as the operations center as the city hall is too near the battlezone.

The military is not anymore issuing a deadline. But there is palpable hope that the end of the crisis is near. (READ: Duterte honors Marines killed in Marawi) – Rappler.com