Jun 16, 2017 9:00 AM PHT
Mara Cepeda
Facebook Twitter Copy URL
Copied
The House has consistently shown it will protect the President from his critics, with Speaker Pantaleon Alvarez leading the charge MANILA, Philippines – It’s a numbers game in the House of Representatives, and most lawmakers – if not all – have been playing to protect President Rodrigo Duterte.

Upon Duterte’s victory in the May 2016 polls, legislators began jumping ship or signing coalition agreements with the President’s Partido Demoktratiko Pilipino-Lakas ng Bayan, the party that initially had only 3 lawmaker-members prior to the start of the 17th Congress.

The formation of the so-called “supermajority” early on – composed of at least 267 out of the 291 lawmakers – shows Speaker Pantaleon Alvarez as a no-nonsense leader in a House that would serve as Duterte’s legislative shield.

But being the President’s protector is not surprising at all for the House, long been known for this role in Philippine politics.

“Historically, the House is more subject to the control of Malacañang,” said University of the Philippines political analyst Aries Arugay.

Local politics drives the motivations of lawmakers, who must fight to balance the interests of their districts and the political party they belong to.

“We know the President has budgetary powers and each member of the House relies on funding for their constituencies. The Senate sometimes has the autonomy to challenge executive decisions,” said Arugay.

The ‘anointed’ minority bloc and the opposition

Critics argue the House is too much of a rubber stamp.

“The Suarez-led minority has no qualms [about] being avid supporters of Duterte. This was shown by their actions of supporting the war against drugs, muted stand on extrajudicial killings, death penalty bill, lowering the age of criminal responsibility, martial law declaration, among others,” said Villarin.

“The Suarez group is not critical of the administration’s policies, highly collaborative, disingenuous in their engagements with the majority,” he added. 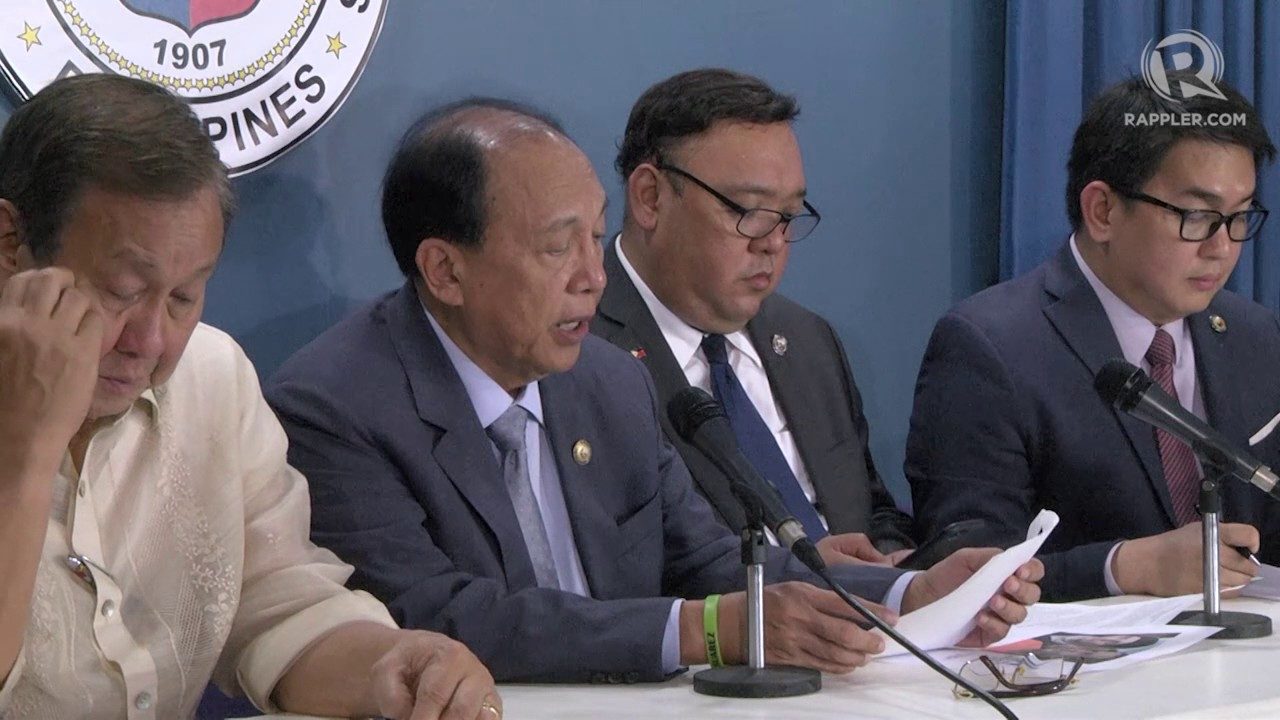 Ideally, minority lawmakers serve as the voice of dissent in the lower chamber, but this does not accurately describe Suarez’s bloc. Suarez had even co-authored some of the more controversial pet bills of Duterte, like the reimposition of capital punishment.

This is why Villarin and 6 other independent minority bloc lawmakers formed the “Magnificent 7″, the genuine opposition in the House under the Duterte administration. It has been difficult for them, as interpretation of House rules is subject to the agreement of the majority.

“What was disturbing was the changing of rules in parliamentary debate and deliberations. We in the authentic minority, already ‘minoritized’, was further marginalized by being gagged in raising questions through time limits,” said Villarin. He called out Alvarez for removing House leaders, including former president and now Pampanga 2nd District Representative Gloria Macapagal-Arroyo, for not voting in favor of the death penalty bill.

“Even critical members of the majority who registered a principled dissent were stripped of being committee chairpersons. This amplifies the adage, ‘What are they in power for?’” said Villarin.

But for Arugay, the House is not necessarily a rubber stamp of the executive, if one considers the number of Duterte’s priority bills the House actually passed.

“When you say they’re being a rubber stamp in terms of performance, this refers to the extent of following the legislative agenda. But they didn’t even produce most of the priority bills,” said Arugay in Filipino.

Out of the 13 measures identified as priority by Malacañang in September 2016, the House only passed 3 bills on 3rd and final reading by May 2017: Duterte had also wanted to lower the minimum age of criminal responsibility, but the House subcommittee on correctional reforms approved a bill that keeps the criminal liability age at 15 and strengthens the Juvenile Justice Act instead.

The House contingent in the Commission on Appointments also did not confirm all of the President’s appointees to the Cabinet.

A more accurate description, said Arugay, would be the House serving as Duterte’s shield against criticisms on his legislative agenda and controversial policies.

Perhaps the best example of this is the quick way lawmakers junked the first impeachment complaint against the President filed by opposition lawmaker and Magdalo Representative Gary Alejano.

The committee on justice deemed the complaint sufficient in form but insufficient in substance, thumbing down the ouster plot against Duterte in what seemed to be a planned script that lasted just 4 hours.

Alejano was not allowed to defend his arguments, with his colleagues telling him his “lack of personal knowledge” made his accusations against Duterte baseless.

Unsurprisingly, the House plenary officially rejected the impeachment complaint with a vote of 217-4-0. 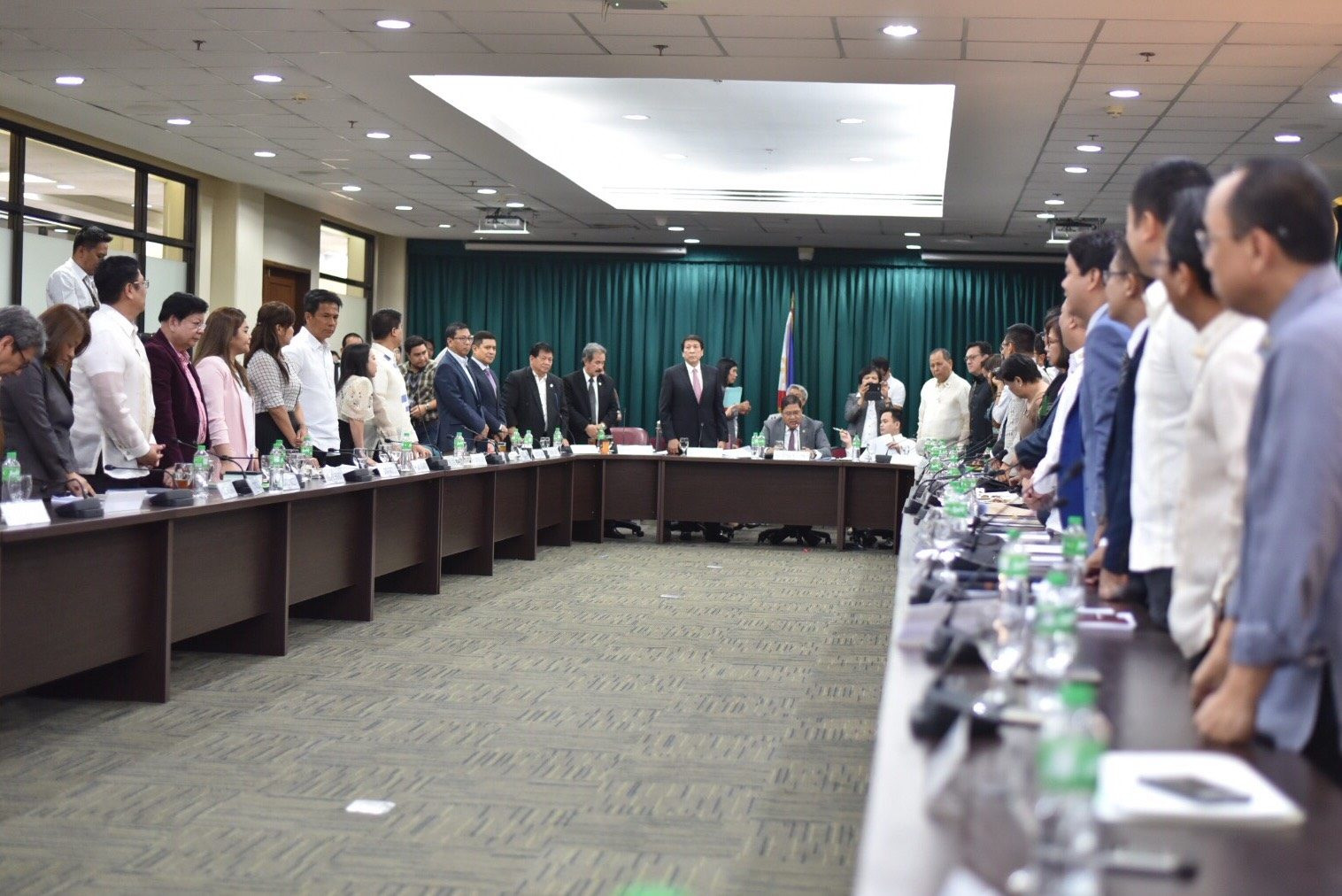 House whips led by Majority Leader Rodolfo Fariñas also did their work to ensure the passage on 3rd and final reading of the bill seeking to reimpose the death penalty.

By watering down the bill from 21 crimes to just 7 drug offenses, lawmakers managed to fight off several arguments of anti-death penalty advocates. (READ: What happened behind closed doors to the death penalty bill)

At the same time, the approval of the House bill indicated a majority of lawmakers’ support for Duterte’s bloody war against drugs, which has been linked to the deaths of about 7,000.

Alvarez himself also takes stands that favor the President, his longtime friend from Davao.

When the Supreme Court (SC) allowed the late dictator Ferdinand Marcos to be buried at the Libingan ng mga Bayani, Alvarez respected the ruling because Duterte supported it.

“We are a government of laws and not of men. This cardinal principle of a democratic system is the basis of the Supreme Court ruling allowing the burial of former president Ferdinand Marcos at the Libingan ng mga Bayani. We should respect its decision as the final arbiter of all constitutional and legal issues,” said Alvarez at the time.

But when petitioners urged the SC to junk Duterte’s declaration of martial law in Mindanao months later, Alvarez said Congress will ignore the High Court should it compel the House and the Senate to convene and assess the basis of Proclamation Number 216.

Davao City 1st District Representative Karlo Nograles argued majority of the House belongs to a coalition that “expressly supports” the President’s agenda, which is not necessarily wrong.

“To be supportive of the change agenda is not being a rubber stamp. It means we are engaged in a dynamic partnership with the executive to bring the country back on its feet,” said Nograles, who chairs the committee on appropriations.

Deputy Speaker Fredenil Castro said the best way to describe the relationship between the House and the President is “collaboration and not dictation.”

“If ever the House supports the acts/programs of the Duterte administration, it is because the President, in the mind of the House, acts for the best interest of the country and its programs coincide or jibe with the legislative direction of the House,” said Castro.

Alvarez himself shared the same view when asked to respond to criticism that he leads a House that is subservient to Duterte – a criticism that arose after the House issued a resolution supporting martial law in Mindanao.

He told his critics: “Mag-congressman na muna sila (They should try being congressmen first).”

(Does it mean when we think the President is doing the right thing and we’re agreeing with him that we are already subservient? Isn’t that a very unfair statement to make? Let’s look at the situation objectively.)

In many ways, Alvarez is like Duterte – a supporter of controversial policies and unafraid to blurt out statements that many wouldn’t expect from a traditional politician. Villarin described Alvarez as a “strong and oftentimes uncompromising” Speaker who “instills fear and awe” in his colleagues.

“He minces no words, spits them out directly, and is brutally frank in his remarks,” said Villarin, pointing out that Alvarez choosing the veteran Fariñas as Majority Leader “reaped him dividends” in running the House.

But what the opposition describes as a “brutal” leadership style is just an “assertive” one for the majority in the House.

“The Speaker is the implementor of the assertiveness of the House and with the strong and similarly assertive leadership of the Speaker, I think he will get things done,” said Castro.

“Speaker Alvarez has defined his leadership by consolidating support in a chamber with numerous partisan and even ideological divides. He has held the coalition together and this has made the passage of key legislation less vulnerable to obstructions and delays,” added Nograles.

This goes to show that Alvarez continues to enjoy the support of most lawmakers, despite him being embroiled in an extramarital scandal that turned into a messy political feud with his ex-friend and Davao del Norte 2nd District Representative Antonio Floirendo Jr.

But in the Philippines where there is no genuine political party system, who wouldn’t support a Speaker who enjoys the backing of the most powerful man in the country?

As long as the President trusts Alvarez, he will remain Speaker. And as long as Alvarez is Speaker, the House will continue to be Duterte’s loyal defender. – Rappler.com