Special Assistant to the President Bong Go released two photos on Thursday, one of them showing Duterte inside Bahay Pangarap, his official residence at the Malacañang grounds.

One photo shows Duterte poring over documents, and the other posing with Go. Both photos, according to Go, were taken late Thursday afternoon.

(He’s okay. He sounds different when he calls because there’s a problem or if he seems weak because he’s sick – I’d be able to feel that. Last night, our conversation was very lively. He was just asking how I was.)

“Last night I was talking to him and he sounded very strong and upbeat. So I think he’s strong as a bull and could be sleepy as a night owl,” said Panelo in a separate interview with media.

Duterte has been out of the public eye since Monday, June 12, Independence Day. He skipped his first Independence Day celebration, because he was tired from staying up late, said Foreign Secretary Alan Peter Cayetano, who subbed for Duterte.

The President’s health was the focus of a media briefing at the Palace on Thursday, Duterte’s 4th straight day of rest. This is the longest he has gone without any official activities. 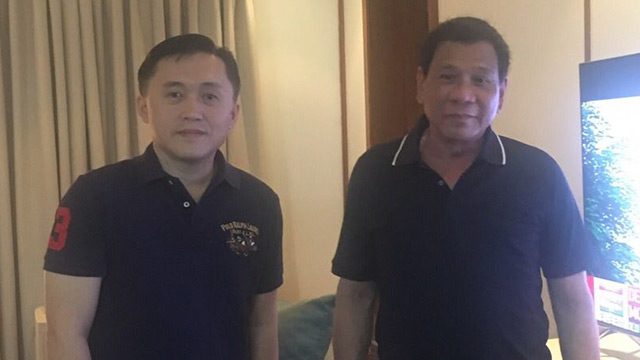 Panelo reiterated that any talk of the President being ill is just “wild speculation.”

“Let me disappoint those who may think that he’s sick and may want him sick. He’s not. Definitely,” added Panelo, who said he called Duterte to relay a “special message” from a mutual friend.

The President was supposed to attend a Philippine Drug Enforcement Agency (PDEA) event on Wednesday, June 14, but instead sent Dela Rosa to read his prepared speech.

“Okay siya, okay. Hindi siya nagkasakit (He’s okay. He isn’t sick),” said Dela Rosa, who has known Duterte since his days as a young lieutenant. The PNP chief was also once Davao City police chief when Duterte was mayor.

Panelo wasn’t privy to Duterte’s activities on Wednesday but said the President told him he was “very busy” because of the “problems in Mindanao.”

While on an official visit to Russia on May 23, Duterte had placed the entire Mindanao island under martial law after local terror groups attacked Marawi City, Lanao del Sur. Duterte also suspended the privilege of the writ of habeas corpus, which gives more buffer for police and the military to make warrantless arrests.

Duterte has been visiting military camps since clashes in Marawi City began. During his visits, the President meets with injured soldiers.

His last public appearance was on Sunday evening, June 11, when he attended arrival honors for Marines who were slain in Marawi City. – Rappler.com