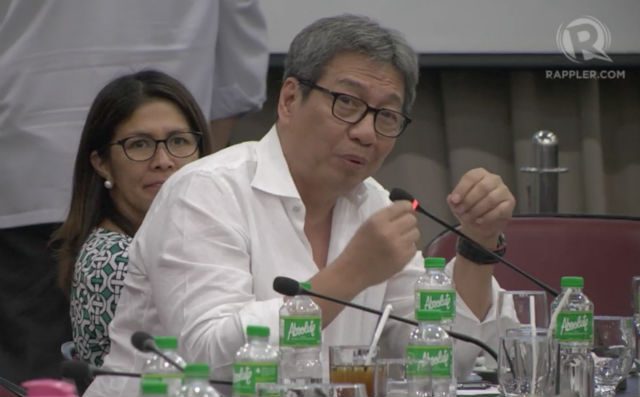 Facebook Twitter Copy URL
Copied
The lawmaker who filed the bill seeking a P3,000 casino entrance fee admits he also gambles, but argues the law does not prohibit legislators from doing so

MANILA, Philippines – Isabela 1st District Representative Rodolfo Albano III admitted to gambling in casinos and even defended his colleagues who do the same during the House’s 3rd hearing into the Resorts World Manila attack on Wednesday, June 21.

Albano asked Philippine Amusement and Gaming Corporation (Pagcor) Chairperson Andrea Domingo for her opinion on his bill seeking a P3,000 entrance fee for any person entering casinos to gamble.

Domingo first said she had no objections to the measure since Pagcor is already charging a P100 entrance fee for all its licensed casinos.

But Albano was incredulous upon hearing this, telling Domingo he was never charged an entrance fee for his past visits to casinos.

But according to Albano, lawmakers are allowed to gamble because they were elected by the people already.

(We’re not prevented from playing because the people have already elected us. They know the people they elected are into gambling. The only ones prohibited from gambling are civil servants, those covered by the civil service law.)

“So noong nahalal po kami, ‘yung iba sa amin nagsusugal din kami nang onti at ‘di naman kami na-addict (When we were elected, some of us are gambling a little but that does not mean we are addicts),” added Albano.

The lawmaker is the current Majority Leader of the powerful Commission on Appointments, the select group of legislators who vet Cabinet appointees.

Government officials are among those prohibited from playing in casinos based on Presidential Decree 1869 – also known as the Pagcor Charter – as amended by Republic Act Number 9487 and Malacañang Memorandum Circular Number 8.

The law says “government officials connected directly with the operation of the government or any of its agencies” are not allowed to play in casinos. (READ: Gambling addiction: How the Philippines prevents, handles ‘problem gamers’)

Members of the military and the police are likewise prohibited from gambling.