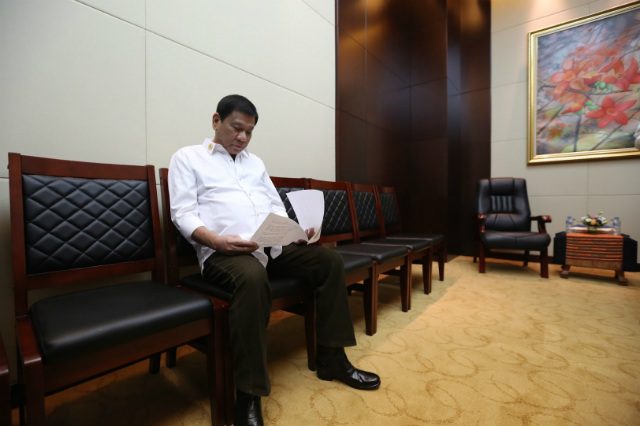 Facebook Twitter Copy URL
Copied
In disregarding the international ruling on South China Sea, 'We allow ourselves to be bullied, but we call it an independent foreign policy,' an analyst says

MANILA, Philippines – Upon returning from his first foreign trip as chief executive, President Rodrigo Duterte announced on September 10, 2016, that the Philippines will pursue an “independent foreign policy.

The phrase “independent foreign policy” is nothing new, as it is stated in the Constitution.

The Duterte administration, however, gave it currency when it made previously unthinkable moves, such as declaring an economic and military split from the United States and rejecting new grants from the European Union.

Shock and awe from “The Punisher” forced powerful countries to pay attention to the Philippines during Duterte’s first year in office.

“Suddenly, the Philippines is no longer just a speck that is a very small player in world affairs,” Foreign Secretary Alan Peter Cayetano said in May.

While striving to become independent, however, the Philippines ended up isolated from its traditional ally, the US, and from other countries that emphasize human rights.

It was, before anything else, a year that left us breathless.

Here’s a quick rundown of issues and events in foreign policy:

On the West Philippine Sea

On the US, China, and Russia

These issues and events show a number of contradictions.

In the name of an independent foreign policy, for instance, Duterte wants to break free from the US. His hands are tied, however, when it comes to China.

On human rights, Duterte lambasts countries hitting his war on drugs, but has not given the same dose of “putang ina” (son of a bitch) to what he considers a source of drug traffickers: China.

He is also rarely, if ever, heard cursing at China for its island-building activities in the West Philippine Sea.

Victor Andres Manhit, the Philippine managing director of international think tank BowerGroupAsia, said in October 2016 that Duterte’s push for an independent foreign policy seems “to be really more of independence from the United States.”

On disregarding the South China Sea ruling, Manhit said, “We allow ourselves to be bullied, but we call it an independent foreign policy.”

University of the Philippines-based political analyst Aries Arugay said he believes “there is a hedging strategy being employed by the President.

Arugay explained that hedging is like opening oneself to many suitors. “So you’re not committing to anyone. You are spreading yourself or you are taking offers from everyone,” he said.

In a recent forum organized by the Ateneo School of Government (ASOG), its former dean Antonio La Viña said “it’s a confusing execution of what this independent foreign policy is.”

On top of all these is Duterte’s personalized way of handling foreign policy, which, according to sociologist Randy David, “has acquired an emotional dimension” under the long-time mayor.

Recent events, however, can serve as eye-openers for him.

On the eve of Independence Day this year, Duterte had to acknowledge US assistance to Philippine troops battling ISIS-linked terrorists in Marawi City.

Months after announcing his separation from the US, Duterte grudgingly said of American aid, “Nagpapasalamat na rin ako. Nandiyan na ‘yan (I have to be thankful. It’s already there).”

This is the same President who, in October 2016, told the US and the EU in the face of their supposed meddling in local affairs: “Go away, bring your money to somewhere else. We will survive as a nation.”

As Duterte marks his first year in office, the threat of terror reminds The Punisher: countries need each other. – Rappler.com