Jul 1, 2017 6:49 PM PHT
Bea Cupin
Facebook Twitter Copy URL
Copied
President Rodrigo Duterte reiterates his warning that he will ask the public to ‘occupy’ the Prietos' Mile Long property in Makati City as it 'belongs' to the people 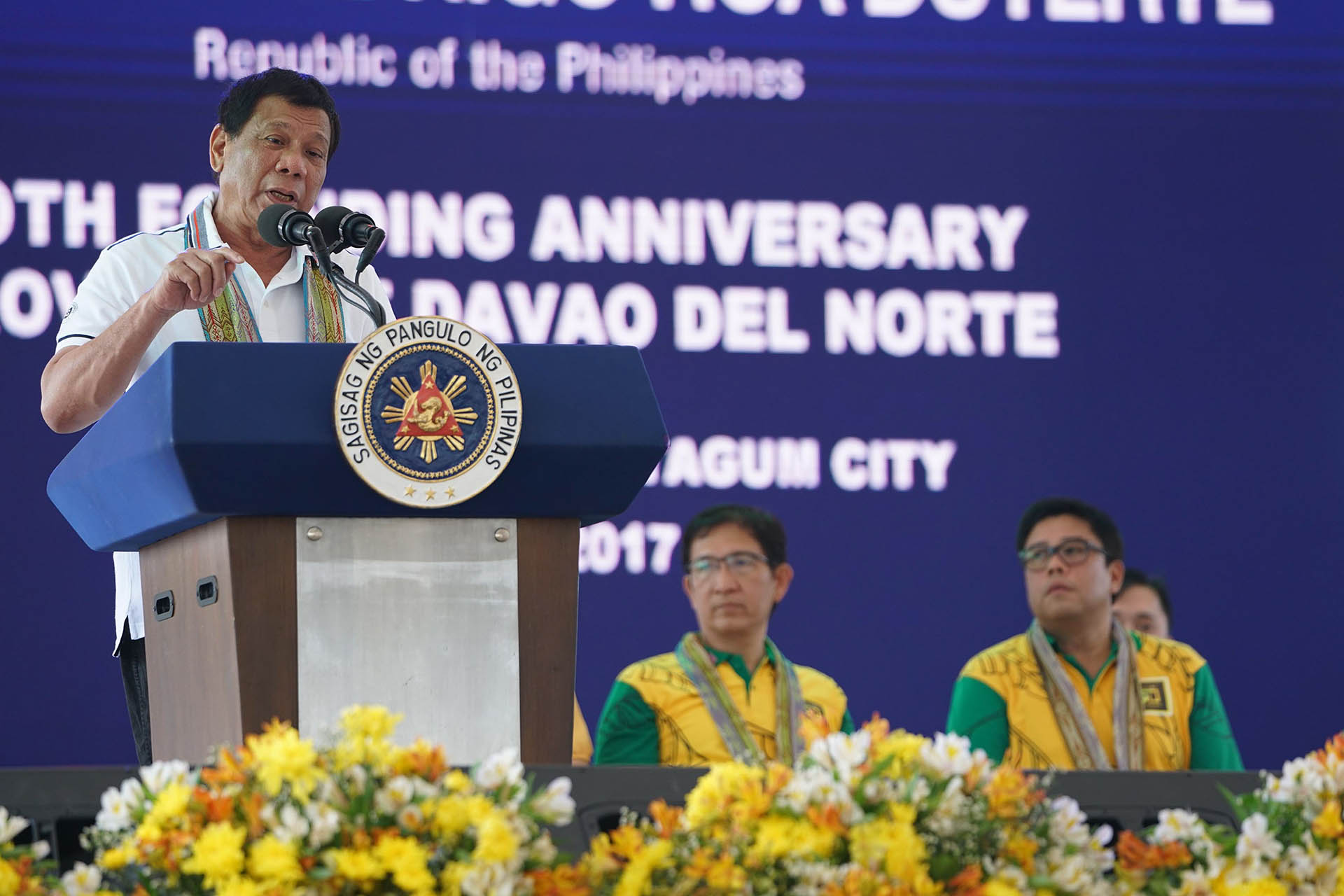 MANILA, Philippines – As President Rodrigo Duterte embarked on his second year in office, he launched fresh attacks against a major newspaper, accusing its owners of not paying proper taxes for a property whose ownership is still the subject of a court battle.

In a speech during the Davao del Norte’s 50th founding anniversary on Saturday, July 1, the Chief Executive warned that he would “make an exposé” against the Philippine Daily Inquirer whose owners he accused of incorrect tax payment.

“One of these days, I will come up with an exposé,” he said.

The President claimed that the “Inquirer” owed P8 billion in taxes, though he was apparently referring to the newspaper’s owners, the Prietos, who owned the property in question.

“They occupy Mile Long ang contract ana, 50 years, extension kausa. Why extension? Ang kita ng mga tindahan diha, sila’y ga kolekta (The contract is only for 50 years but it was extended. Why extension? They collect revenues from the stores there),” Duterte said.

“Ila pa ang taxes. Kanang mga tag-iya ng Inquirer kaya…pero kung magsalita kayo kontra sa akin, akala ‘nyo sino ang malinis. Kayo ang mga tulisan (The taxes are theirs. The owners of Inquirer. But when you speak against me, it’s like you’re the ones who are clean. You are the thief),” he added.

It was the latest in a series of attacks of Duterte against media  companies he believed to be critical of his administration. (READ: Duterte tries to link Inquirer owners to ex-official with huge salary)

The President said he would make sure that the disputed property is “returned” to the government.

“But I will not allow you to do that to the Filipino people. You return the property to the Republic of the Philippines,” he said.

He reiterated that he would ask the people to “occupy” the Mile Long property because “it belongs to you.” The President had made the same threat in March.

Duterte was referring to a property in Makati City that is the subject of a court case between the Sunvar Realty Development Corporation a developer owned by the Rufino and Prieto families, and the city of Makati.

In September 2016, the Court of Appeals (CA) rejected the city government’s move to take possession of the property. This was in response to a 2015 decision by a Metropolitan Trial Court (MTC) in Makati which ordered Sunvar to vacate the 2.9 hectare property, according to a report from the BusinessMirror.

The MCT then ordered Sunvar to pay the government back rentals reaching P478.2 million then. They were also told to pay a P3.2 million monthly rent beginning June 2015.

(So those courts, those judges better watch out. No, it’s like this. When there’s bidding, even if it’s a Consunji and an Ayala…when there’s a bidding, someone applies for a restraining order. In all those protests, there never was a finding that it was overpriced.)

Aside from the Inquirer, the President also singled out major TV network ABS-CBN, which he had also accused of airing unflattering reports about his presidency.

In May, the President threatened ABS-CBN with multiple estafa charges for not airing his campaign advertisements which  he had already paid for. – Rappler.com