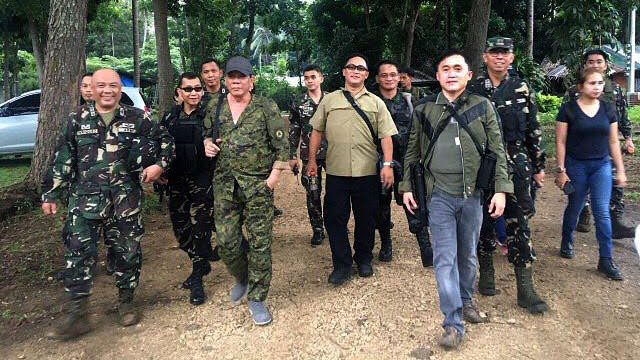 MANILA, Philippines (UPDATED) – Despite the security risks, President Rodrigo Duterte again attempted to visit Marawi City in the middle of clashes between terrorists and government troops.

Duterte tried to visit the besieged city on Friday, July 7 to talk to soldiers in a military camp there after his visit to the 2nd Mechanized Infantry Brigade in Iligan City.

But due to “bad weather,” the trip did not push through, according to Special Assistant to the President Bong Go.

He was accompanied by Special Assistant Go and Presidential Security Group personnel led by its commander Lope Dagoy. The photos were taken around 4 pm.

On Friday, Malacañang did not release the President’s schedule to Palace reporters. Some were told he was enjoying “private time.”

When the Palace informed media of the President’s visit, they explained that the trip was made at the last minute.

Duterte has made plans to go to Marawi at least twice before. He was supposed to have flown there last June 8 but his trip was cancelled supposedly due to bad weather.

He then announced he intended to finally visit Marawi on June 30, the day he commemorated his first year in power.

In a televised speech the day before, Duterte even made light of how the PSG asked him not to make public any details of his trip.

“They said, you do not need the publicity. It will not contribute anything anyway. So let’s just fly there sans the publicity,” he said in his June 29 speech to police in Camp Merecido in Davao City.

Duterte has been saying the Marawi siege appears to be “winding down.” He has expressed hope that the clashes end before he delivers his second State of the Nation Address on July 24.

As he visited military and police camps in Mindanao in the weeks following his martial law declaration, Duterte told security personnel how the Marawi crisis is a persisting weight on his mind.

“There is nobody sadder than me because I declared martial law and I was the one who ordered the Armed Forces and the Philippine National Police to go to the places where there is violence,” he said on Thursday, July 6.

He has promised soldiers and police medical equipment for their hospitals and a trust fund for the education of their children if they die in battle. During his camp visits, he has given away cash, guns, and cellular phones.

On the day of his Iligan visit, the death toll in Marawi included 353 terrorists, 87 government security forces, and 39 civilians.

On Friday, the Marawi crisis and the martial law Duterte declared in response enter their 46th day.

Since martial law is only valid for 60 days under the Constitution, it is set to lapse by July 22.

Duterte will have to decide in the coming weeks if he will lift martial law or ask Congress for an extension. The AFP is finalizing its recommendation to the President. – Rappler.com