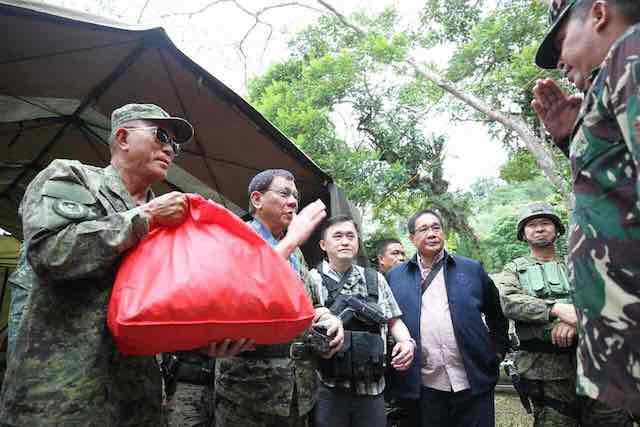 Armed Forces chief General Eduardo Año said in a statement that a few minutes before the President’s chopper landed in the city, “there were a few sniper shots coming from unknown direction that targeted the landing zone area.”

Lieutenant Colonel Jo-Al Herrera, Joint Task Force Marawi spokesman, said the President arrived at the headquarters of the 103rd brigade at about 1 pm and left before 5 pm. He was given a security briefing and then addressed the troops.

“It was an intimate visit. It was like a father visiting his children,” Herrera said.

He said Duterte’s visit boosted the morale of the troops, who received goods and watches from him.  The President’s visit was limited to the military camp.

Herrera said in a media interview after the visit that Duterte thanked the troops for their hard work, acknowledging the “challenges” they faced in the urban battle.

In seeking an extension of martial law in Mindanao until the end of the year, Duterte cited the “evolving” urban warfare.

A civilian guest invited to see Duterte also confirmed to Rappler on Thursday morning the preparations for his visit at the headquarters of the 103rd Brigade.

The source said he was told it was cancelled and immediately left Marawi but was later informed that Duterte’s visit pushed through.

Mobile communication signals were cut off noontime on Thursday, which is typically done when VIP visitors come to the city.

Journalists tried to request entry to the brigade headquarters but were turned down.

The chief executive had planned to go to Marawi at least twice. The closest he got last time was in a chopper that had already taken off from Iligan City. Strong rain, however, dashed the possibility of the visit pushing through.

Duterte, who had even geared up in battle attire and brought along a rifle then, had to content himself with a visit to a military camp in Iligan.

The President had also made plans to fly there last June 8 but the trip was cancelled, also due to bad weather.

Duterte’s visit comes two days before Congress convenes a joint session to tackle his request to extend martial law for another 5 months or until the end of the year.

The visit is 4 days before his second State of the Nation Address (SONA) on Monday, July 24.

Duterte had said it’s important that he gets to visit to Marawi as the military battles it out with the Maute Group and thr Abu Sayyaf Group.