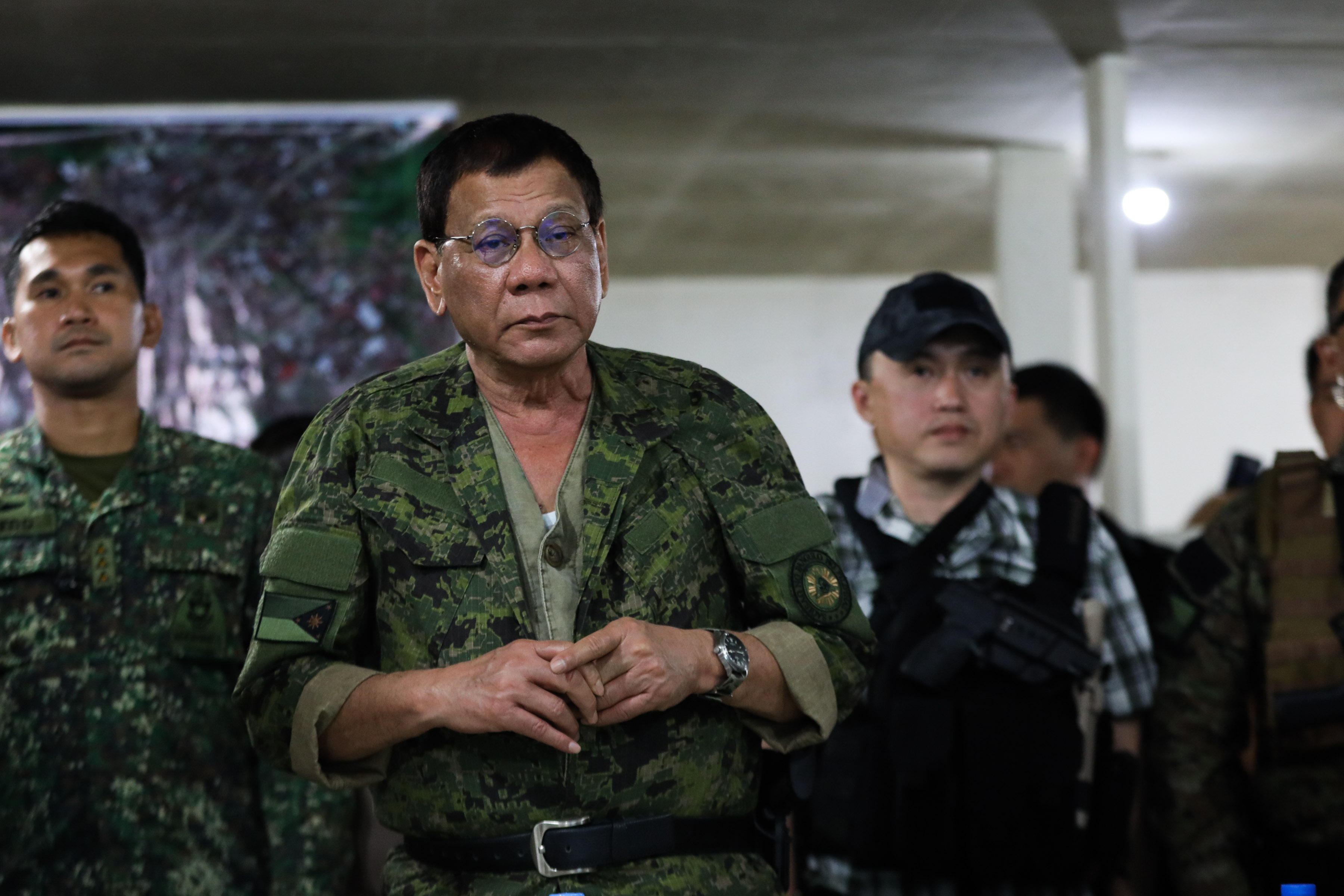 MANILA, Philippines (5th UPDATE) – President Rodrigo Duterte, on Friday, July 21, said he will no longer negotiate for a peace deal with communist rebels following a series of attacks by the New People’s Army (NPA) on government troops.

Speaking at a Davao City investment forum, Duterte said he was “tired” of talking to communist rebels and that they just fight it out instead.

“I believe you Mr Sison, you are right. We stop talking, we’re wasting our time,” he said, addressing his words to Communist Party of the Philippines founder Jose Maria “Joma” Sison, his former teacher.

After the government moved for the re-arrest of National Democratic Front (NDF) consultants in the peace process on Thursday following the President’s order to cancel the talks, the CPP slammed Duterte’s pronouncement as “a strongman’s act of bad faith aimed at bullying the NDFP to bow to his terms of surrender.”

Though he hoped for an end to the decades-old communist insurgency during his watch, Duterte said he was prepared to fight for another 50 years since the talks no longer seemed promising.

“Let us renew the fighting for another 50 years. It’s what you want,” he said.

The President even said he can no longer justify spending so much on the formal peace talks, held in different parts of Europe.

“It’s a great expense to be sending people there for nothing,” he said.

In an apparent bid to convince NPA members to surrender, Duterte said Sison was “dying” and if they wanted out of the conflict, he would accept them as surrenderers.

Duterte said he was prepared for “ferocious” fighting since he had the full force of security troops behind him.

“Me, I have an Armed Forces, a Navy and police. I can fight for another 50 years. Let us agree on that and let us be ferocious at each other,” he said.

Duterte’s words on Friday clarified his statement on Thursday in Marawi when he told troops he no longer wanted to talk to communists.

He had also told soldiers that after the Marawi crisis, they should be ready to “reorient” offensives towards the NPA, the armed wing of the Communist Party of the Philippines (CPP).

It was the second time Duterte said he would no longer talk peace with the Left. In February, his decision was prompted by the communists’ lifting of their unilateral ceasefire.

Asked about Duterte’s Thursday statement, Chief Peace Adviser Jesus Dureza said hours ahead of the President’s own clarificatory statement on Friday that nothing was official until he himsefl heard the Chief Executive say, “talks over or terminated.”

“What is clear now is that the scheduled backchannel meeting to work on possible resumption of the suspended 5th round was cancelled. If there will a new officially-announced position, then let’s all wait for a categorical statement coming from the President no less,” Dureza said before the President’s speech in Davao City

Solicitor General Jose Calida announced on Thursday that he had moved for the re-arrest of NDF consultants in the peace talks – an indication of the discontinuation of the negotiations.

The NDF consultants’ lawyers said this was a “violation of the Joint Agreement on Safety and Immunity Guarantees (JASIG) and violates their democratic rights under the Comprehensive Agreement on Respect for Human Rights and International Humanitarian Law (CARHRIHL).”

OSG Spokesperson Erik Dy said the conditional release granted to some of the consultants are based on Supreme Court ruling resolution dated August 2, 2016, and not on the Joint Agreement on Safety and Immunity Guarantees (JASIG).

“The conditions provide that should the formal peace negotiations cease or fail, their bond shall be deemed automatically cancelled,” said Dy.

Duterte’s latest pronouncement comes after members of his Presidential Security Group (PSG) were wounded in a clash with the NPA in Arakan, North Cotabato.

After the firefight, Duterte himself said there will be no peace negotiations for as long as the NPA continued its attack on government forces. Chief Peace Adviser Jesus Dureza announced that the government was cancelling backchannel talks with the National Democratic Front (NDF) in connection with the scheduled resumption of formal negotiations in August.

Before the clash between NPA and the PSG, Duterte had already been voicing frustrations with the Left. He called their changing stances on his martial law declaration “confusing” and likened them to a “child throwing a tantrum” in recent speeches. – Rappler.com