Give us back Balangiga bells, Duterte tells U.S.

Jul 24, 2017 6:48 PM PHT
Paterno Esmaquel II
Facebook Twitter Copy URL
Copied
'They are ours. They belong to the Philippines,' President Duterte tells the US in his SONA 2017, with the American ambassador in the audience 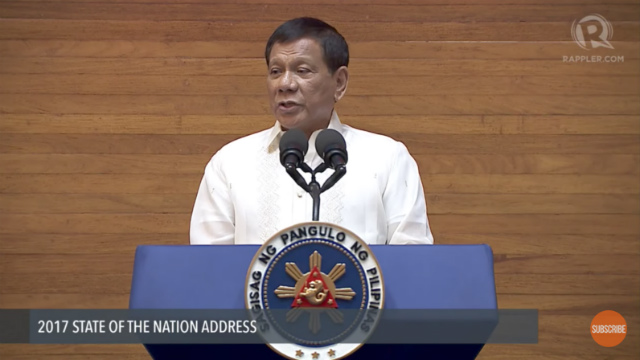 MANILA, Philippines – President Rodrigo Duterte told the United States on Monday, July 24, to return the iconic bells that led to a 1901 massacre, the US military’s worst single defeat in the Philippines.

The Balangiga bells, once found in Balangiga Church in Eastern Samar, had been taken by the Americans as spoils of war.

“Give us back those Balangiga bells,” Duterte said in his second State of the Nation Address (SONA) on Monday.

“They are ours. They belong to the Philippines. They are part of our national heritage,” he added.

“Isauli naman ninyo. Masakit ‘yan sa amin,” he also said. (Please return it. That is painful for us.)

Duterte made these remarks in the presence of US Ambassador to the Philippines Sung Kim, who had a neutral reaction when his face was shown in the government’s livestream. This comes as Duterte slams the US for supposedly meddling in his anti-drug campaign.

Rappler is still trying to reach the US embassy for comment as of posting time.

More than 3,000 online petitioners also urged the US in 2014 to return the Balangiga bells. When then US President Barack Obama visited the Philippines that year, however, the US leader said nothing about these so-called spoils of war. – Rappler.com