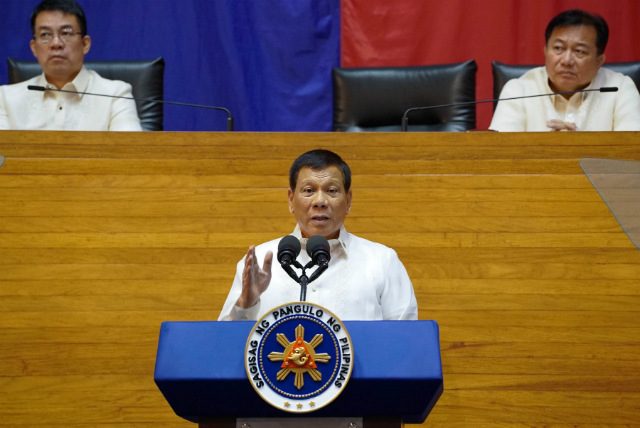 MANILA, Philippines – President Rodrigo Duterte hammered on his favorite topics, such as illegal drugs and mining, when he delivered his second State of the Nation Address (SONA) on Monday, July 24.

In his annual report to Congress, Duterte also singled out key personalities, such as Senator Juan Edgardo Angara, who was in the audience, and communist leader Jose Maria Sison, who is in The Netherlands.

Below are the key issues mentioned in Duterte’s second SONA, with links to stories published on Rappler:

WAR ON DRUGS – Duterte said that his war on drugs “will be unrelenting,” and that the option for drug traffickers “is either jail or hell”

DEATH PENALTY – Duterte pushed for the death penalty again, saying that “in the Philippines, it’s really an eye for an eye, a tooth for a tooth”

K TO 12 – Duterte said the government vows to implement the K to 12 program that expands the basic education system, meaning grade school and high school, to grade 12

BALANGIGA BELLS – Duterte told the United States to return the iconic Balangiga bells, which in 1901 led to the US military’s worst single defeat in the Philippines

TAX REFORM – Duterte urged senators to pass the Duterte administration’s first batch of tax reforms, as he called out Senator Juan Edgardo Angara for not clapping when he made this request

RAPPLER – Duterte claimed that Rappler is “fully owned by Americans,” but Rappler clarified that it is 100% Filipino-owned (READ: Debunking lies about Rappler)

For an analysis of Duterte’s second SONA as well as his first year in power, watch the panel discussion hosted by Rappler’s Maria Ressa below.