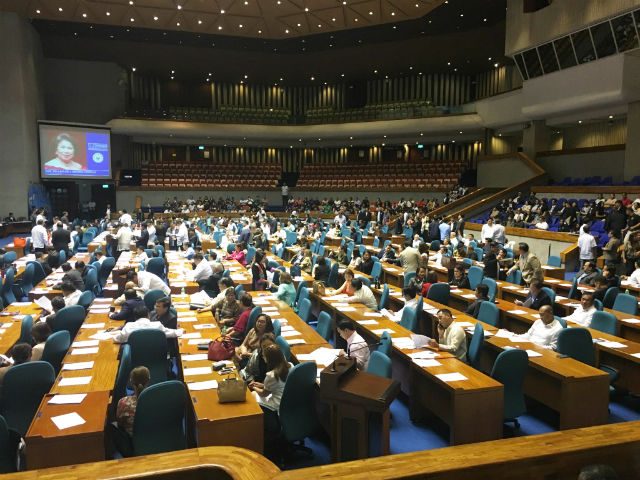 Facebook Twitter Copy URL
Copied
The proposed measure, one of President Rodrigo Duterte's priority measures in his second SONA, will give retirement benefits and separation incentives to affected employees

MANILA, Philippines – Two days after President Rodrigo Duterte urged lawmakers to pass the measure, the House of Representatives on Wednesday, July 26, approved on 3rd and final reading the bill that would remove redundancies and overlapping functions in the executive branch.

Lawmakers approved House Bill (HB) Number 5707 or the Rightsizing the National Government Act, which is among the priority measures that President Rodrigo Duterte mentioned in his 2nd State of the Nation Address on Monday, July 24. (READ: 6 priority bills of Duterte in SONA 2017)

The bill seeks to grant Duterte the power to eliminate redundant, duplicate, and overlapping functions in all offices under the executive branch to “improve public service delivery.”

The proposed measure creates a Committee on Rightsizing the Executive Branch to oversee the streamlining efforts targeted to be finished in 3 years.

HB 5707, however, excludes the following:

Congress, the judiciary, constitutional commissions, the Office of the Ombudsman, and local government units may adopt the rightsizing program should they wish to.

Employees who would be affected by the rightsizing program would be provided with retirement benefits as well as separation incentives. – Rappler.com