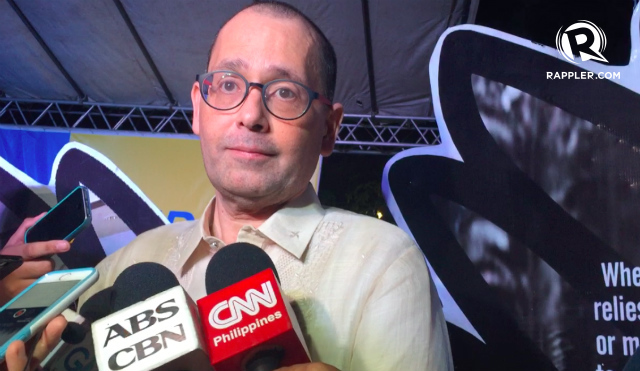 “I think this Chito Gascon, since he’s not functioning as an objective human rights [commission] chairman, he should have the decency to resign,” said Panelo on Thursday, July 27, during a media interview in Malacañang.

Gascon, who has criticized the Duterte administration’s drug war, should step aside to give his post to “another person who is not vengeful or who is not vindictive or who is not subjective,” added Panelo.

Last Monday, Duterte said the CHR should be abolished.

Duterte’s chief legal counsel blasted the CHR head for supposedly being selective in his condemnation of human rights violations.

As CHR chairman, Gascon should be investigating the violations of all persons, “not just people you want,” said Panelo.

Asked what made him conclude Gascon is biased and selective, Panelo cited the CHR’s failure to file cases against Duterte.

However, the CHR, as a fact-finding and recommendatory body created by the 1987 Constitution, cannot file cases. It can only assist in filing complaints.

“How can they be accusing the President of violation of human rights, they have not formally charged it, whether when he was mayor or even when he is President?” said Panelo.

Asked if he thought Duterte was serious when he threatened to abolish the CHR, Panelo said the President was only telling the body to do a better job.

“All he means is, do your job, don’t be biased. Otherwise, you have no business being there and that commission is not functioning as it should be,” said Panelo in a mix of English and Filipino.

Because the CHR is a constitutional body, it will take a revision of the Constitution to abolish it. This also means Gascon can only be replaced through impeachment. His term will last until May 2022.

But if it were up to Panelo, the CHR should be dissolved.

“If the people running it are like that, it should really be abolished,” he said.

Reacting to Panelo’s statement, Gascon told Rappler that he “stands by the full record of my public service” and will continue to focus on his responsibilities as head of the independent commission focused on upholding human rights in the Philippines.

“I will continue to do so without fear or favor & shall always speak truth to power,” he said. “We shall always abide by constitutional & human rights precepts in the performance of our duties as we shall keep faith that truth & justice shall ultimately prevail.”

He added that Panelo “should focus on his job of trying to give the best legal advice he can muster for the Office of the President as I will do what I can in doing my job as best I can.”

Akbayan Representative Tom Villarin, meanwhile, called the Duterte’s pronouncement to abolish the CHR a “diabolical proposal” which will lead to “a scenario of authoritarian rule.”

“It will only institutionalize the reign of impunity, the culture of fear and silence now happening around us and will lead to the disempowerment and desecration of our democratic values,” he said during a privilege speech on Monday, July 31.

He urged the Congress to resist the proposal as the country, now more than ever, needs an independent body to monitor human rights violations.

“We cannot give human rights monitoring to the AFP or the PNP simply because they still cannot give us the guarantee of protection,” Villarin added. “They hold the monopoly of violence that they can use against us citizens of the republic anytime.”

Duterte has had a beef with Gascon ever since the CHR chief concluded Duterte violated the Magna Carta of Women with his rape remark about an Australian victim of a hostage-taking incident in 1989.

Gascon has also said the thousands of drug-related deaths are a “failure” of government and that the International Criminal Court may probe the killings if government fails to do so.

The President has called Gascon an “idiot” focused on “nitpicking.”

CHR, under the leadership of then commissioner Leila de Lima in 2009, investigated the alleged existence of the Davao Death Squad (DDS) which was reportedly behind 206 deaths from 2005 to 2009. (READ: Davao Death Squad: What ever happened to the investigations?) – Rappler.com