Corona impeached a year ago; where are solons’ SALNS?

Dec 12, 2012 8:53 AM PHT
Facebook Twitter Copy URL
Copied
It's exactly a year ago today, December 12, when the House of Representatives impeached then Chief Justice Renato Corona. But where are the SALNs of the lawmakers who prosecuted him? 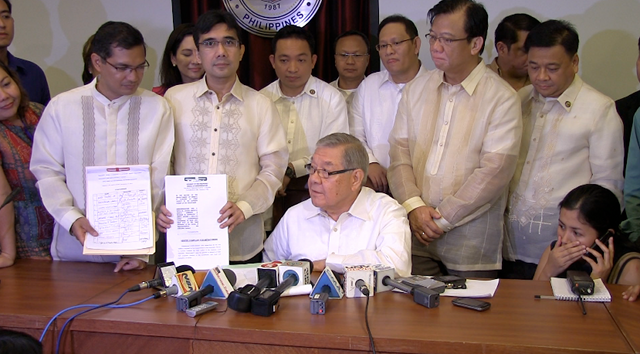 A total of 188 solons signed the impeachment complaint that launched what would turn out to be a 4-month highly charged impeachment trial that resulted in the historic removal of a chief justice from office.

The Senate impeachment court convicted Corona for failing to accurately declare his assets in his Statement of Assets, Liabilities, and Net Worth (SALN).

Lead prosecutor Iloilo Rep Niel Tupas Jr, who suffered several episodes of tounge-lashing from senator jurors during the trial, said he remembers the trial as a “painful experience.” (READ: The prosecution’s original sin)

“The impeachment was just a job that we had to do. It was a difficult mission that we accomplished…. It was a very challenging and painful experience, not just for the Filipino people, but for the members of the House,” Tupas told reporters. But Tupas said he is proud of his role in the trial because the impeachment trial resulted in reforms.

“We can slowly feel the reforms, not only in the judiciary but in the entire bureaucracy. It’s a game changer in the campaign for reforms by the Aquino administration,” he said. “Even the highest official of the land can be held accountable.”

Tupas said there’s more transparency in the judiciary now. He cited the decision of the Supreme Court justices to release their own SALNs. It was during the trial that the SALN of a member Supreme Court (SC) was released to the public for the first time since a memo in the 1980s.

The irony of the House

Ironically, the same transparency cannot be said about the House of Representatives.

One year since the House members impeachmed Corona, it remains difficult to access the SALNs of House members.

Under its current policy, the Office of the Seretary General cannot release SALNs without the consent of the individual solons. What the House does is it releases a summary of the members’ SALNs.

Pressured because of the impeachment trial, Speaker Feliciano “Sonny” Belmonte Jr. created a committee that will review House guidelines in releasing SALNs. So far, nothing has come out of it. (READ: House creates committee to study release of SALNs)

“The House should really make the SALNs available because of the impeachment. The House [members] should be a role model for public officers,” said Tupas. (Solons who disclosed their 2011 SALN)

“If we prosecuted Corona and we pinned him down based on that single article on the SALN, I think it is just proper for the leadership to make the SALN easily accessible to the people,” said Tupas.

A number of the prosecutors have yet to release their SALNs.

Tupas himself has not given the media a copy of his own SALN although he has renewed his commitment to release them. – Rappler.com