Give CHR zero budget if it cannot be abolished – Alvarez 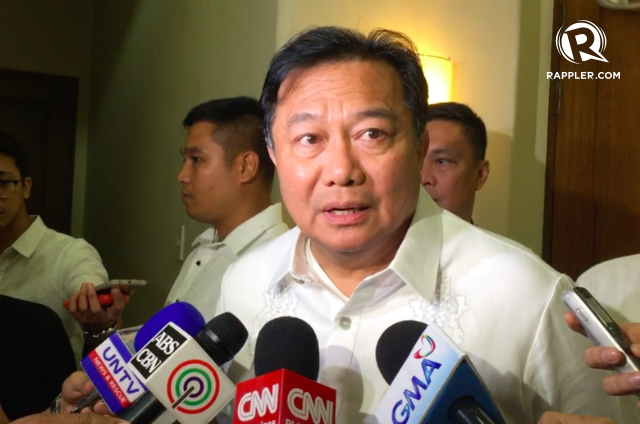 MANILA, Philippines – House Speaker Pantaleon Alvarez on Monday, August 7, said that if the Commission on Human Rights (CHR) cannot be abolished for allegedly being unfair in the delivery of its services, Congress might as well deprive it of a budget.

(If I were to be asked, I’d give them zero budget if that’s their performance. We won’t abolish it because it’s a constitutional body, but then let’s not give it any budget because it’s unfair. They are not doing their job to protect the rights of all Filipinos.)

President Rodrigo Duterte, after his second State of the Nation Address (SONA) last July 24, said that the CHR is “better abolished.” It can, however, only be abolished by changing the provisions that created it in the 1987 Constitution.

The figure is also lower than the original budget proposed by the CHR which was P1.723 billion. While the Commission is ready to work with whatever funds will be given, Chairperson Chito Gascon asked Congress to reconsider.

“If Congress wants to see a more empowered CHR, we welcome any increase in our budget,” Gascon said. “We hope you reconsider, under circumstances, what should be given to us is something that will equip us to face these challenges.”

No reason to fund CHR?

Albay 1st District Representative Edcel Lagman echoed Gascon’s sentiments about the need for an increase, adding that the proposed budget is “a pittance compared to the overall proposed budget of the national government.”

Alvarez, however, sees no reason to fund the CHR as it continues to monitor human rights violations allegedly under Duterte’s aggressive war on drugs.

(I do not see any reason for the government to fund the CHR. Who pays your salary? The state, right? But you always criticize the state, which protects the rights of victims. But you, what do you do, protect criminals?)

The CHR is mandated by the 1987 Constitution to investigate allegations of human rights abuses by state actors such as the military or police.

Investigating and arresting non-state actors behind crimes such as murder and rape is the primary responsibility of the police. The Commission, however, can monitor whether or not the state holds them accountable. (READ: Things to know: Human rights in the Philippines)

Asked about Alvarez’s stand, Gascon said he is confident that members of Congress will see how important it is to fund the CHR given the current circumstances.

(We still trust Congress that because of current events, they see the importance of providing the CHR with a budget to allow it to fulfill its mandate.) – Rappler.com