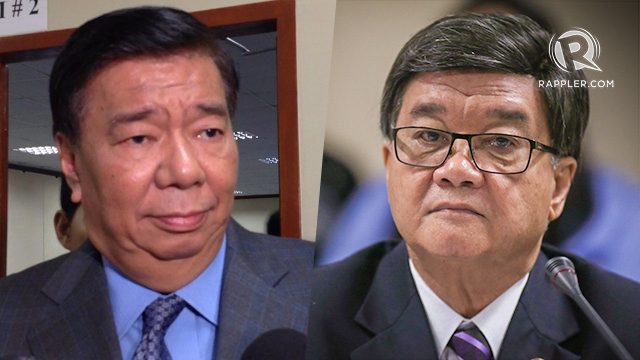 MANILA, Philippines (UPDATED) – The National Bureau of Investigation (NBI)  is only investigating 37 cases out of the more than 4,000 killings in the administration’s ongoing drug war.

This was revealed on Thursday, August 17, during a Senate finance committee hearing on the proposed P17.3-billion budget of the Department of Justice (DOJ) for 2018.

This information was only given after the continuous questioning of Senate Minority Leader Franklin Drilon during the hearing.

Drilon asked about the status of Justice Secretary Vitaliano Aguirre II’s Department Order 120 which ordered the NBI to investigate alleged extrajudicial killings. Aguirre was evasive on the issue.

“No data as to report or as to data generated by the NBI on killings related to the campaign against illegal drugs, as you directed in your [order]?” Drilon asked Aguirre.

Drilon criticized Aguirre and said there was an apparent attempt to “hide” things from the public.

“There appears something is being hidden; being kept. This is an issue which cannot be denied is an issue. All we’re asking for is data arising from your own issuances. Apparently no one can give this committee any data on this matter – notwithstanding the fact it has been a year since this campaign started,” Drilon said.

“We don’t even know how many cases have been reported under this Department Order No 120 and this is only for, since its issuance in February 2017 and does not cover even the past incidences,” he added.

Aguirre told the committee the DOJ needed to “collate” the data first and would submit the information in 10 days.  But when Drilon threatened to hold in abeyance the budget of the agency, Aguirre said they could provide the requested information in 20 minutes.

Aguirre also said that in July 2017, he issued a directive asking all agencies under the DOJ to submit an inventory of cases on drug-related killings but he had yet to received any submission.

To this, Drilon, a former justice secretary, said: “That’s a sad commentary. The directive of the Secretary is being ignored.”

During the hearing, Justice Undersecretary Reynante Arceo said that as of May 30, 2017, the DOJ listed 3,050 deaths from legitimate drug-related police operations. Aguirre meanwhile said the Philippine National Police estimated “over a thousand” were killed by vigilante groups.

“Based on data of the newly created Inter-Agency Council Against Drugs by the President, as of May 30, 2017, [the number of] drug personalities who died in the anti-drug war is about 3,050,” Arceo said.

Out of the more than 4,000 deaths, NBI Director Dante Gierran said they were investigating 37 cases – 7 from Metro Manila and 30 from other parts of the country.

The low number disturbed Drilon. He said the poor performance of the DOJ was “part of the culture of impunity.”

“You call that performance? Of the over 4,000 cases related to drugs, exactly 37 being investigated and of the 37, 24 pending, 3 have been recommended for prosecution. Dismal. Well, it’s a part of the culture of impunity,” Drilon told reporters after the hearing.

Aguirre, for his part, defended his agency and said the NBI is slow because it was not originally mandated to investigate the killings. The NBI, he said, started looking into the deaths only after receiving Department Order 120 in February 2017.

“Investigating deaths or drug-related killings is not one of them. And under the law, I could add functions to the NBI, so I added in February 2017. Meaning to say, before that date walang obligation ang NBI  (the NBI is under no obligation) to investigate these killings,” Aguirre told reporters.

Aguirre added that Drilon himself was the author of the NBI Modernization Law which specified the cases the bureau was obliged to investigate.

He also said there was no attempt to conceal details from the public.

“I told them that there’s no truth to that. Ba’t naman itatago namin (Why would we hide it)? The President is very transparent on this,” Aguirre said.

Drilon has asked the committee to hold the DOJ’s budget in abeyance until it gives complete answers. The next hearing is set on Thursday, August 31.

In a statement, detained Senator Leila de Lima said, “The admission of the DOJ/NBI in today’s hearing only proves the truth of the criminal charge of non-prosecution of offenses I filed against Aguirre with the Ombudsman. Aguirre must be prosecuted accordingly.”

She described Aguirre’s admission as the “glaring truth…which validated what some sectors, including myself, have been pointing out: no serious and prompt investigation of extrajudicial killings related to the drug war is being conducted by our relevant agencies.” – Rappler.com