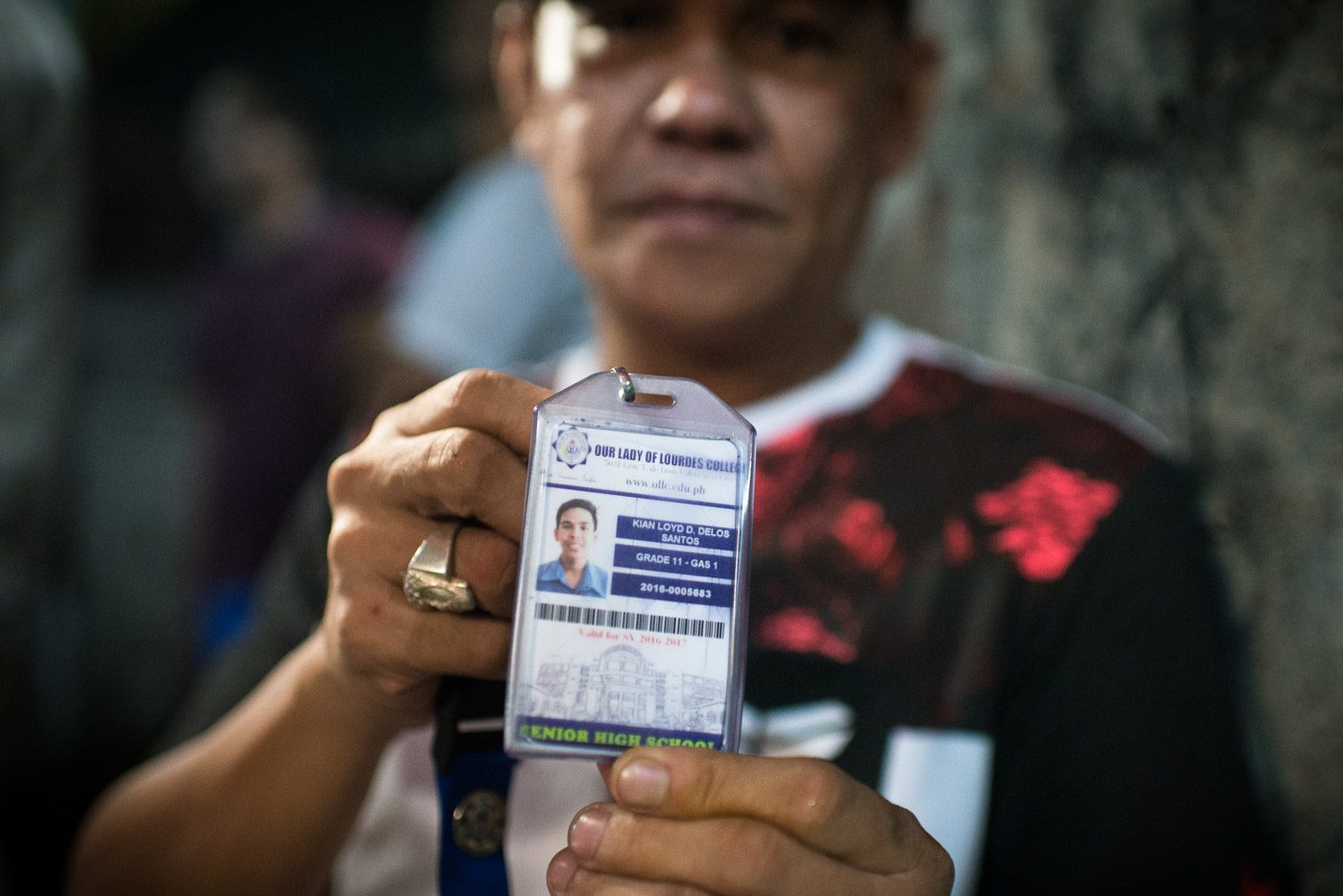 Facebook Twitter Copy URL
Copied
The family and neighbors of 17-year-old Kian Loyd delos Santos have only one question: Why in the world would police kill such a sweet boy?

MANILA, Philippines – Seventeen-year-old student Kian Loyd delos Santos could have been a policeman, but the policemen who killed him made this dream impossible.

On Wednesday night, August 16, Kian was shot to death in what the police described as a shooting encounter in a dark alley near his house.

CCTV footage and witnesses, however, revealed that he was dragged from one alley to another, past a basketball court, and into a dead-end corner where he was asked to run with a gun – and when he did, was shot.

Kian died wearing a blue shirt and printed boxer shorts – his pantulog or sleepwear, his father said. His dead body was found in fetal position with a gun in his left hand. His father said in media interviews that this detail, alone, could attest to his son’s innocence, since the teenager was not left-handed.

The first night of Kian’s wake, an old woman who regularly bought pencils from the Delos Santos family’s mini-store asked what happened, upon seeing a casket in what was usually a room filled with candy and school supplies.

Kian’s father, Saldy, said it was his son, the young boy who attended to you, who was killed. The news came as a shock to the old lady, who nearly fainted, as if she were a mother who just heard that her own son had been killed. The old woman asked, how could such a thing happen? He was a very good boy! He sharpened the pencils I bought so I wouldn’t have to spend for a sharpener!

The other night, a street child visited the wake to see Kian. The little boy said Kian would always turn up the volume of whatever he was watching so that the boy, too, could watch with him.

It was these little things that Kian did that has made his death a puzzle to his family. Why in the world would police kill such a sweet boy? 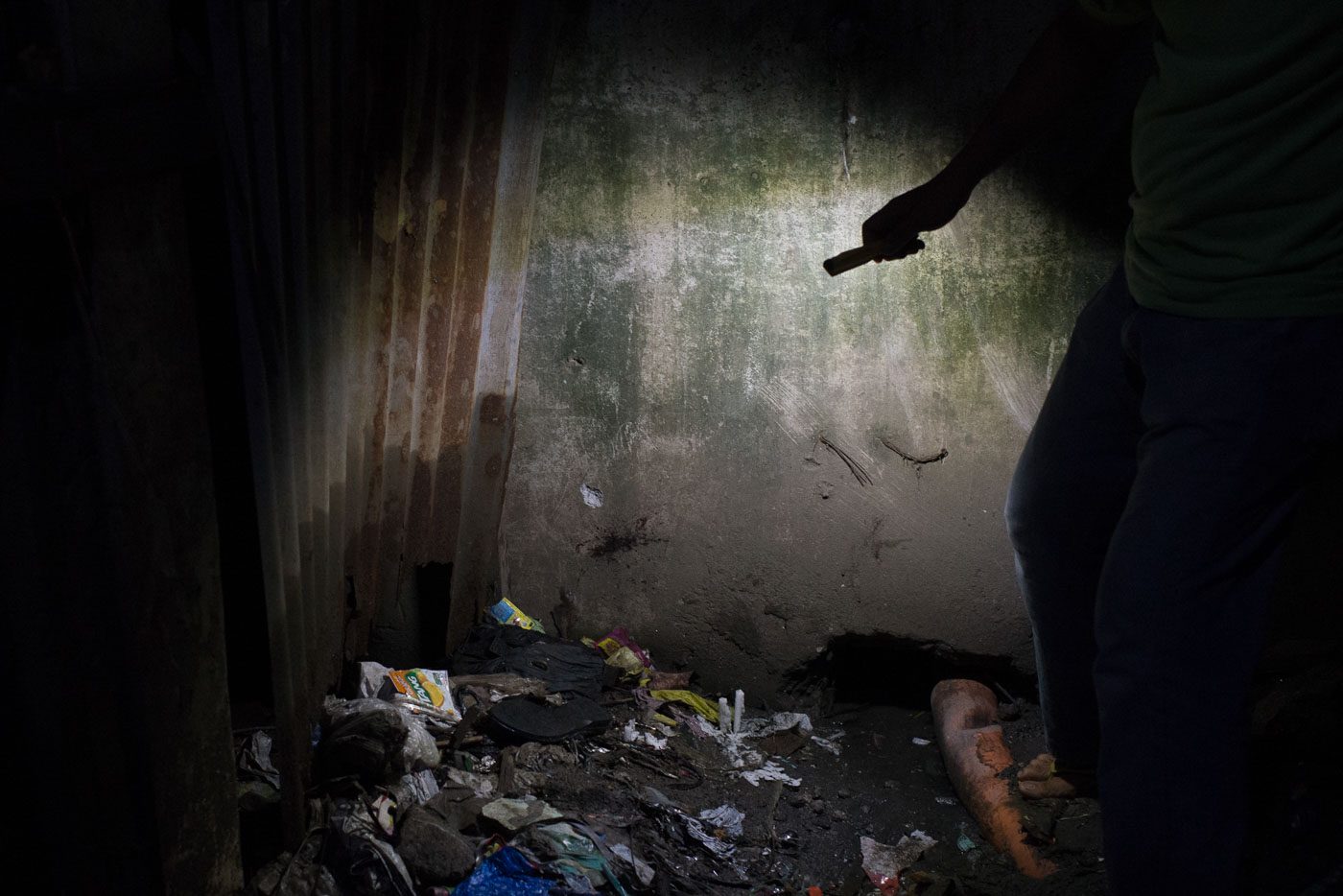 Kian, or Ian to most, was just like any other teenager. If he weren’t in school or busy manning their store, his eyes were glued to his cellphone watching funny videos on YouTube or blasting Fliptop battles as he sang along to the rap songs, to his father’s confusion.

“Ano ba ‘yang pinapatugtog mo (What are you playing)?” he would ask like a typical parent.

The young man only had one vice: eating junk food. For breakfast, he would often have a cup of coffee and a pack of his favorite cheese-flavored chips. For lunch, 5 pieces of fish balls, and a few pieces of kwek-kwek (fried battered quail eggs) would be good enough for him.

Often at night, Kian would ask his father if he wanted a massage, and he would ask for a massage in return. Many times they wouldn’t have efficascent oil, so they would use cooking oil instead. It worked the same way anyway, his father would say.

All 4 of Saldy’s children did not grow up in luxury. None of them had their own rooms – not even their own beds – at home. The family members slept beside each other every night until such time that the children would be capable of living on their own.

Unlike many kids who spent their days running around the streets and playing with neighbors, Saldy’s children were trained to take care of the mini-store he built to support the family as his wife, Lorenza, toiled overseas as a domestic helper.

At 5:30 every morning, it was Kian’s task to open the store and man it until before noon when it was his father’s time to clock in, and Kian would prepare for school. The same way at night, he would close the store before he could walk around the block for some chitchat, like what he did that night he was killed.

Not once did the young man give his father a headache. Not once did he get money from the store to keep for himself. Not once did Kian display bad behavior in school or in the barangay that merited a report to his parents. So imagine Saldy’s surprise when one night, while he was in their other house in Valenzuela, he got a call from his brother that the police had taken his son.

A few hours before he was informed about the incident, Saldy sent Kian a message to sleep early and be careful around the streets. “You know how it is in our street, it could be dangerous,” he said in what would be his final advice to his son.

Kian is your son It has been 3 long nights for Saldy and Lorenza since Kian was killed. Three long nights filled with cameras flashing from left to right, and microphones held to their mouths every hour. Lorenza could barely even be heard. Her voice had gone hoarse from crying and speaking to the media.

On Friday night, August 18, with most of the media already gone, the couple share a moment beside their son’s casket.

Saldy embraces his wife and whispers to her, “Be strong, be strong. Rest now, but be strong.”

Still, Lorenza insists on speaking to the media, when asked. She says even if she has lost her voice, when a question is asked about her son, she musters the strength to speak. She forces herself to shout. “I need to speak up for my son,” Lorenza says.

Saldy will remain restless until the men responsible for his son’s slay are punished. He says he’s been wondering himself, whether the men who killed his son had their own sons as well. “Don’t they think about what their sons would think? What would people say? Your Papa is trigger-happy.”

He thought maybe the killers were the addicts, seeing how it was so easy for them to kill.

“It would have been okay if they did kill an addict who had a gun, but they killed an innocent child. And to think, he wanted to be a policeman,” Saldy says.

Over the past week, at least 81 people have been killed in police operations all over the country. It has been the deadliest week of the so-called war on drugs.

On Wednesday, after 32 people were killed in police operations in Bulacan province, President Rodrigo Duterte praised his men and said it was “good.” Let it continue.

When Saldy is asked if he voted for the President, he can only give a long sigh. Finally he says, “Mali, ‘no (It was wrong, right)?” – Rappler.com