LIVE: Senate hearing on the death of 3 teenage boys 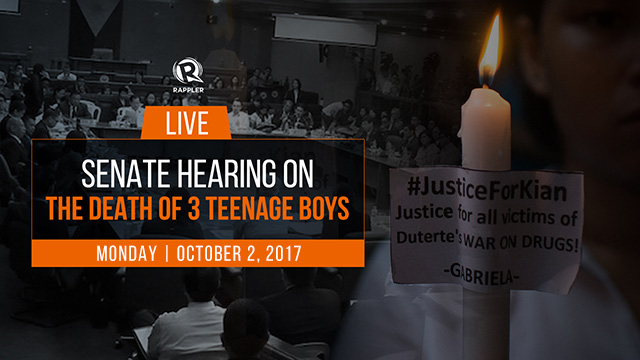 MANILA, Philippines – The Senate committee on public order and dangerous drugs conducted a hearing on August 24 and September 5 on the death of Kian delos Santos, the 17-year-old whom Caloocan police are accused of executing in an anti-drug raid.

Senate Resolution 471 has been filed, expressing the sense to condemn the killing of the Grade 11 student.

The resolution looked into the accountability of the Philippine National Police in the conduct of the campaign against illegal drugs that may have resulted in unnecessary and unjustified deaths.

On October 2, the Senate committee on public order and dangerous drugs widens their probe, where they included the investigation of the death of two other teenage boys, Carl Arnaiz and Reynaldo ‘Kulot’ de Guzman, who where also both killed during police operations.