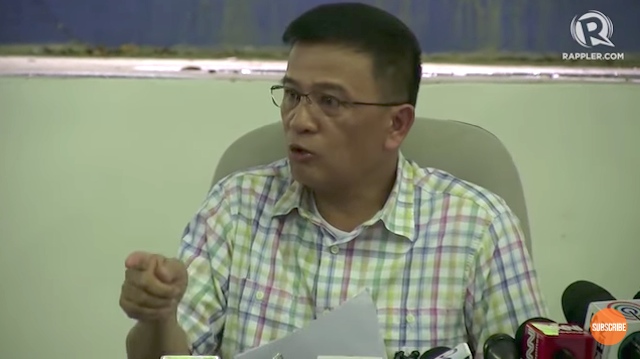 Faeldon made the claim in a news briefing in Taytay, a day after Lacson delivered a privilege speech on the extent of corruption in the Bureau of Customs (BOC), and accused Faeldon and other top officials of accepting bribes. (READ: FULL TEXT: ‘Kita kita sa Customs’)

He claimed he discovered Panfilo Lacson Jr’s alleged involvement in corruption as early as July last year, when Lacson Jr’s company – Bonjourno Trading – brought in shipments of cement amounting to P106 million and undervalued them by 50%.

“I gave the senator the benefit of the doubt na matino siya (that he is clean),” said Faeldon.

“Yesterday, he seems to know everything at the Bureau of Customs. Does he know this? O ikaw mismo pasimuno niyan (Or are you the one behind this)?” said Faeldon, referring to Lacson Jr’s alleged smuggling activities.

Faeldon claimed that Lacson Jr had cost the government “billions” in foregone revenues because of his underdeclared shipments.

Faeldon questioned Bonjourno’s capacity to carry out the shipments, in the first place, when it only had a capitalization of P20,000 in 2015.

“Can he afford this? Did he pay the right tarriff? The right tax?” he asked.

On Wednesday, Lacson delivered an explosive privilege speech, accusing Faeldon and other former military officers at the BOC of accepting grease money, and the other “players” involved in the “tara” system or bribery at the agency.

To this, Faeldon said on Thursday: “Yung sinasabi ni Ping Lacson na may mga player, tanong ko sa ‘yo: ‘Player ka ba (sa smuggling)? Player ba ang anak mo? Dummy mo ba ito (Are you a player in smuggling? Is your son a player? Is he your dummy)’?”

Faeldon said he tracked down Lacson Jr’s alleged smuggling activities when he tried to determine Senator Lacson’s motive for making the exposé, which Faeldon again denied.

He said he recalled several cement shipments in July 2016 which were brought to his attention by his staff as they were undervalued. Faeldon said he later learned that the company had ties with Lacson Jr.

Faeldon alleged that Lacson’s exposé was meant to remove him and his team at the BOC to cover up his son’s smuggling activities.

“They want us out. They do not want the truth to come out. They want us all out, the 6 of us,” he said, referring to the former military officers that he had recommended to key posts in the BOC who were also named in Lacson’s list of alleged corrupt Customs officials.

He said he even sent Lacson a text message to ask him, “Ano ba ang motive mo (What is your motive) to destroy us?”

Faeldon also accused Lacson of using the issue to launch another bid for the presidency.

“Please don’t lie to the people para sumikat ka lang (so that you’ll be popular)….My God, you are a senator, you are respected, and when you lie it is your responsibility that your statement will be investigated,” he said.

Lacson made his exposé on the extent of corruption in the BOC as the Senate probed the P6.4-billion shabu shipment from China.  (READ: TIMELINE: How P6.4B worth of shabu was smuggled into PH from China)

Meanwhile, Vincent Philip Maronilla, District Collector at the Manila International Container Port (MICP), denied that he had authorized two people to act as his bagmen, as alleged by Lacson.

“There is no truth to the allegations that a certain Alex, Attorney Baquiran and Aldave is collecting tara for and in my behalf. I have never authorized anyone to collect any amount for and in my behalf or that of the District Collector’s Office. In this regard I am open to any independent investigation that may be conducted so that the truth may come out,” Maronilla said.