MANILA, Philippines – Usman Mohammad, 23, just graduated from Mindanao State University (MSU) in Marawi City this year. His aim of starting his professional life was interrupted by war as the government neutralizes terrorist groups linked to the extremist Islamic State.

Like him, other youth displaced from Marawi City would like to find a job to support their families, espcially that their properties have either been looted or bombed. But being a Muslim jobseeker is difficult because of the stereotypes in the workplace, he said.

“Based from what I observed from my friends who are also graduates of MSU, when they apply for companies in Manila, when they are identified as Muslim, there’s already discrimination, thinking they are terrorists,” he said in Filipino.

Since there’s little large-scale economic activity in their area, their only choice is to go to Manila where majority of career opportunities are available. But because of the discrimination they are facing, they can’t help but think of just going abroad for work. (WATCH IN 360º: The Marawi humanitarian crisis)

All he could ask for now is make opportunities equal for Muslims.

(Hopefully, there could be opportunities to welcome the youth from Marawi City who were displaced, be given an opportunity.)

Another problem people from the Autonomous Region of Muslim Mindanao (ARMM) experience when it comes to employment is the lack of information and government support in those areas.

Abdul-Ajidz Abdurahman, 24, from Tipo-Tipo in Basilan, said jobseekers in their area do not know when and where there are job vacancies.

(They don’t know where they would go, who to go to, what are the opportunities because we don’t have access to the internet, to publications.)

(There are no job fairs because job fairs are only conducted in cities but none for municipalities.)

For Francisco Lara Jr, country manager of conflict monitoring group International Alert, limiting workplace discrimination for Muslims is a way of promoting peace in the region. (READ: EndDiscriminationNow: On being Muslim and discriminated)

Lara said “unfairness” is the root of the rebellion in Mindanao

“Injustice is a very big issue but oftentimes, its unfairness. Injustice is like you are not able to get an education after the madrassah and you don’t go up – that’s injustice. But when you have an education, when you’ve done everything that is needed but still can’t find a job, that is unfairness,” he said.

“Oftentimes, that triggers extremism, not poverty,” he added, stressing that the crisis in Marawi City should be solved through creating social and business spaces in the region more than relying on the military.

Working in this framework, International Alert launched on Tuesday, August 29, guidelines for companies to include equality and diversity in their hiring and management policies.

The Red Flag project, done in partnership with the Mindanao Business Council (MinBC), provides a set of practical guidelines against the discrimination of employees on the basis of their ethnic or religious backgrounds. 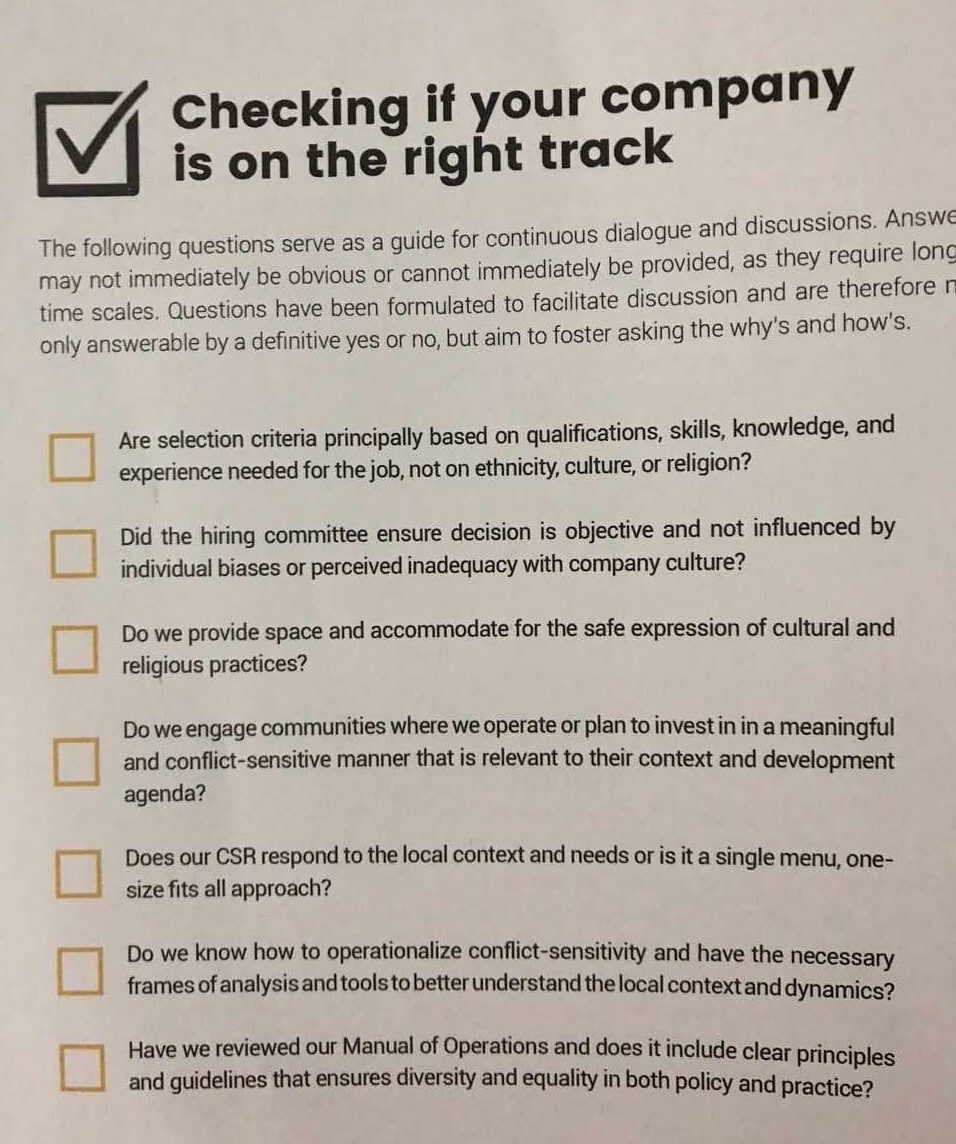 Some 40 firms from the banking, finance, service and extractive industries have joined the commitment to uphold the guidelines set by the project.

Nikki dela Rosa, deputy country manager of International Alert, said they will look into giving incentives to companies that will adhere to the standards.

“We are going to develop a tool kit, along with some professors of the Asian Institute of Management, in creating accessible tools for employers in terms of operationalizing the principles,” she said.

But beyond this intervention, the groups urge the government to promote investments in Mindanao, which will ultimately solve the unemployment problem in the region.

“This is just a segment of most of the problems we have on the ground. A lot of the graduates coming in Muslim areas have difficulty [finding] jobs there. They experience discrimination from companies operating outside the ARMM. We believe this is [just a] stop gap,” she said.

“The best way is to pressure government [to come out with the ] proper package to encourage investors there,” she added. – Rappler.com