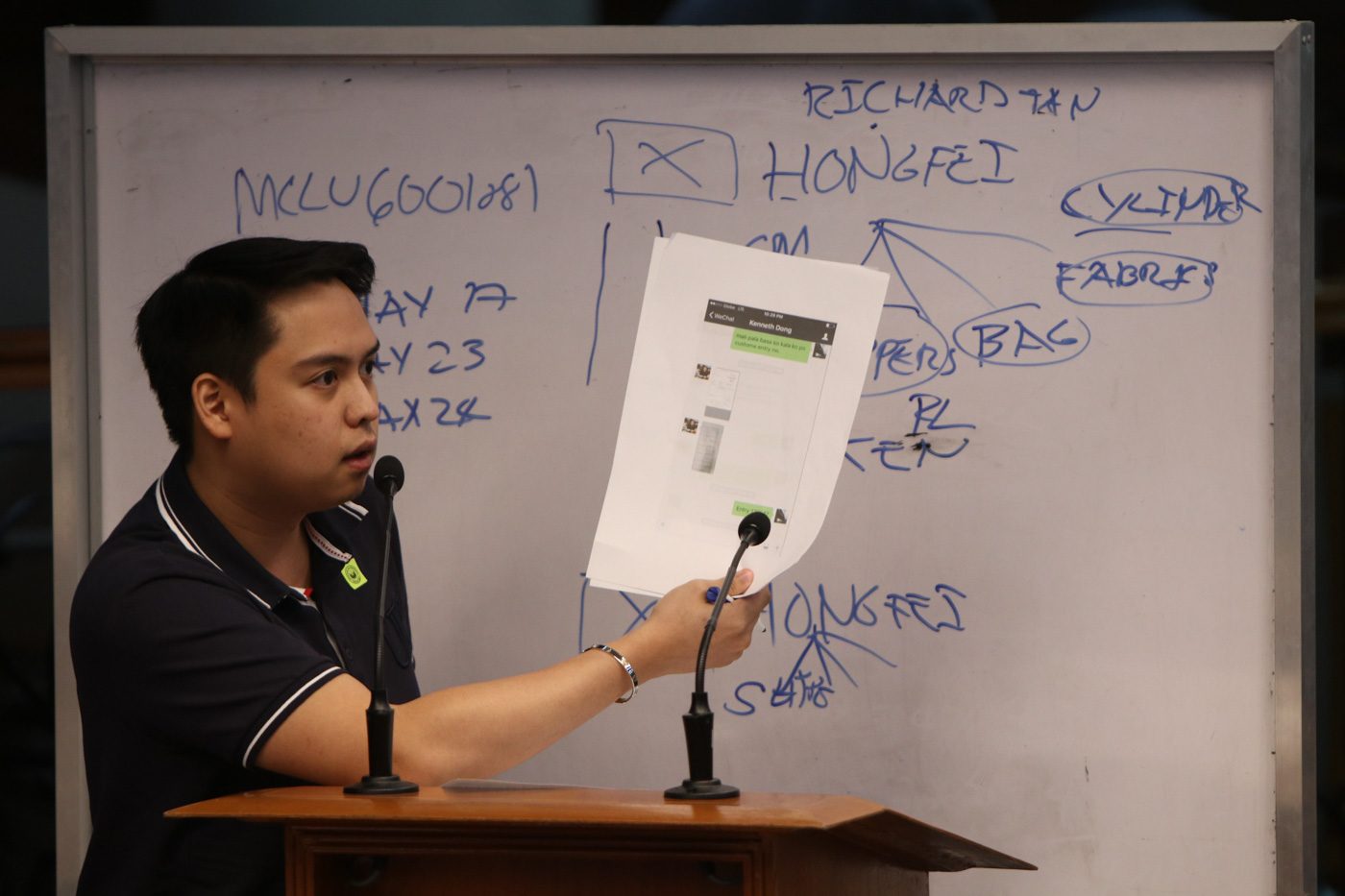 In a statement sent to Rappler by Taguba’s lawyer Raymond Fortun on Friday, September 1, Taguba denied saying that President Rodrigo Duterte’s son and Davao City Vice Mayor Paolo Duterte, and son-in-law Manases Carpio were involved in the corruption of the Bureau of Customs.

He also said he “never testified” that the two were involved in the illegal entry of 604 kilos of shabu to Manila.

Taguba said the inclusion of the 2 relatives of President Duterte in the issue are just “hearsay” because he never met them.

During the hearings, Taguba presented text messages between him and a certain “Tita Nanie,” who introduced him to the so-called Davao Group. Other members supposedly include Davao Councilor Nilo “Small” Abellera Jr and a certain “Jack,” Paolo Duterte’s friend and supposed handler, respectively.

In one text, Tita Nanie told Taguba that Jack would be the one to set a meeting between him and Paolo Duterte. But Taguba said this never pushed through and that he never met the president’s son.

Taguba said he personally met Abellera and Jack in Davao City, which Abellera himself confirmed. But Abellera denied receiving the P5 million “enrolment fee” from Taguba. The latter, however, stands by his claim.

Taguba said his “transactions” with the group went smoothly until his shipment was alerted by the BOC. Tita Nanie, he said, transferred him to another group led by “Big Brother” or Allen Capuyan, a member of the Philippine Military Academy Class of 1983 and who was supposedly assigned to Davao City.

On Thursday, Taguba read new sets of text messages between him and Tita Nanie, with the mention of “Mance” [Mans], the nickname of Carpio, the husband of Davao City Mayor Sara Duterte. (READ: Here’s what else was in Taguba’s text messages on Customs)

At the August 29 hearing, Carpio was implicated for visiting the office of the Customs Commissioner Nicanor Faeldon. (Note: Faeldon has since resigned as Customs commissioner.)

Former BOC intelligence chief Neil Estrella, who resigned after the scandal broke, testified that he saw Carpio once at Faeldon’s office.

Carpio, a lawyer, admitted he goes to the Customs office, saying he had clients who have transactions with the Bureau. He denied that the visits to the BOC were linked to smuggling – a sentiment shared by the President.

Trillanes accused Gordon of “lawyering” and “protecting” the two. Gordon maintained he would not invite them because allegations against them were just “hearsay.” (READ: ‘Committee de absuwelto’? Gordon, Trillanes face off in smuggling probe)

Taguba also apologized to Duterte and Carpio and claimed they have no connection in the smuggled shabu.

Taguba also said on Thursday’s hearing that the drug shipment did not involve the group of Abellera and Jack.

For Trillanes, this is a sign that Taguba is being “pressured.” He maintained that the text messages Taguba read on Thursday clearly identified Duterte and Carpio.

“I can only imagine the pressure being applied on Mr. Taguba right now. But the hearing yesterday was seen on national TV so the public knows what he said or did not say,” Trillanes said in a statement.

“The text messages he read aloud which named Paolo Duterte and Mans Carpio were never forced on him and neither were they fabricated,” he added.

The senator said Taguba’s “clarification” does not change anything and still called for the presence of Duterte and Carpio in the next Senate hearing.