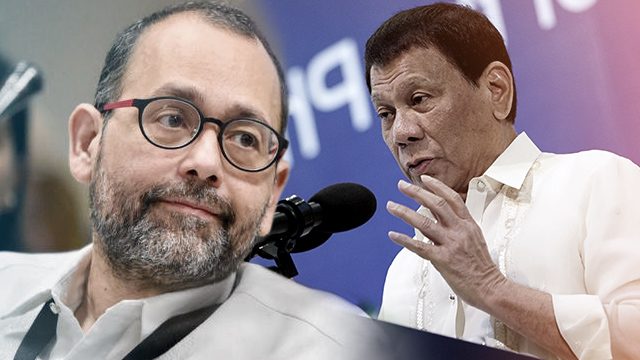 “Every day, even in Marawi, there are hostages there by the terrorists, and they are raping the women every day, yet we don’t hear the Human Rights (Commission) say, ‘Stop now,'” Duterte said in a speech Saturday evening, September 16, at the Matina Enclaves.

The commission’s mandate, however, is to investigate human rights violations perpetrated by state actors. It is the PNP that is responsible for investigating and arresting criminals. (READ: Hate human rights? They protect freedoms you enjoy)

Duterte made his remarks about the CHR during his meeting with SPO2 George Rupinta, who was released by the New People’s Army after 3 months in captivity as a prisoner of war.

In his speech on Saturday, Duterte also scored Gascon for supposedly focusing on the deaths of teenagers killed by cops.

“Why are you fond of teenagers? Now I wonder: are you gay, or a pedophile?” said Duterte of the CHR chair.

The president was referring to CHR’s stance against the killing of Kian delos Santos and Carl Arnaiz, both minors killed by Caloocan policemen two days apart.

“You are so fixated with the death of a young male, that’s why I doubt: pedophile kang gago ka (you’re a pedophile, you fool),” said Duterte.

The CHR is currently at a threat of a huge budget cut as the House of Representatives recently voted for a P1,000 allocation for the agency in the coming year. But Duterte said Gascon had long seen it coming. – Rappler.com