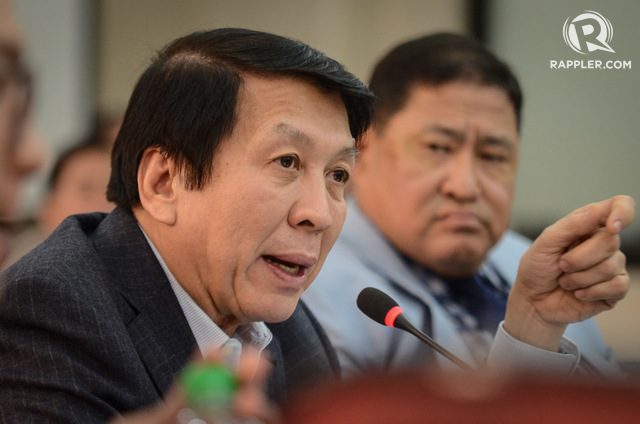 Facebook Twitter Copy URL
Copied
The House Majority Leader says congressmen should be allowed to proceed to Batasan to work, and Speaker Alvarez will turn them over to traffic authorities after the session

During a hearing of the House committee on transportation, Fariñas said getting apprehended on the streets prevent officials from performing their legislative functions. (READ: What laws help keep road users safe in the Philippines?)

Citing parliamentary immunity, he asked the officials of the Department of Transportation (DOTR) and the Metropolitan Manila Development Authority (MMDA) to give leeway to representatives who commit minor traffic violations on their way to Batasang Pambansa in Quezon City to attend a session. (READ: WHO urges motorists: #NoMoreExcuses on road safety)

“Halimbawa eh nakasagasa. Nasugatan ‘yung tao. ‘Pag nagpakilalang congressman yan, eh ‘di ‘tsaka na huhulihin,” explained Fariñas. (For example, his car hits a person, and the person is injured. If he introduces himself as a congressman, then arrest him later.)

He said Speaker Pantaleon Alvarez may surrender the violator to authorities after the session.

“Ang aming rules po, ‘pag natapos ang session, isu-surrender ni Speaker ‘yung member sa inyo,” he said. (Our rule here is, when the session ends, the Speaker of the House will surrender the member to you.)

Under Article IV Section 11 of the Philippine Constitution, a senator or a member of the House of Representatives is entitled to immunity from arrest when session is ongoing: “A Senator or Member of the House of Representatives shall, in all offenses punishable by not more than 6 years imprisonment, be privileged from arrest while the Congress is in session. No member shall be questioned nor be held liable in any other place for any speech or debate in Congress or in any committee thereof.”

(If the representative says he has to catch an important matter in Congress, you will see that anyway. Assist him so we can accomplish our tasks.)

According to an MMDA report, Quezon City, Manila, and Makati have the most number of traffic-related incidents recorded since 2013. (READ: IN NUMBERS: Road crash incidents in the Philippines)

In 2016, the MMDA also found there were 109,322 road crash incidents in the National Capital Region. – Aika Rey/Rappler.com