PH rejects calls by UN member-states for probe into EJKs 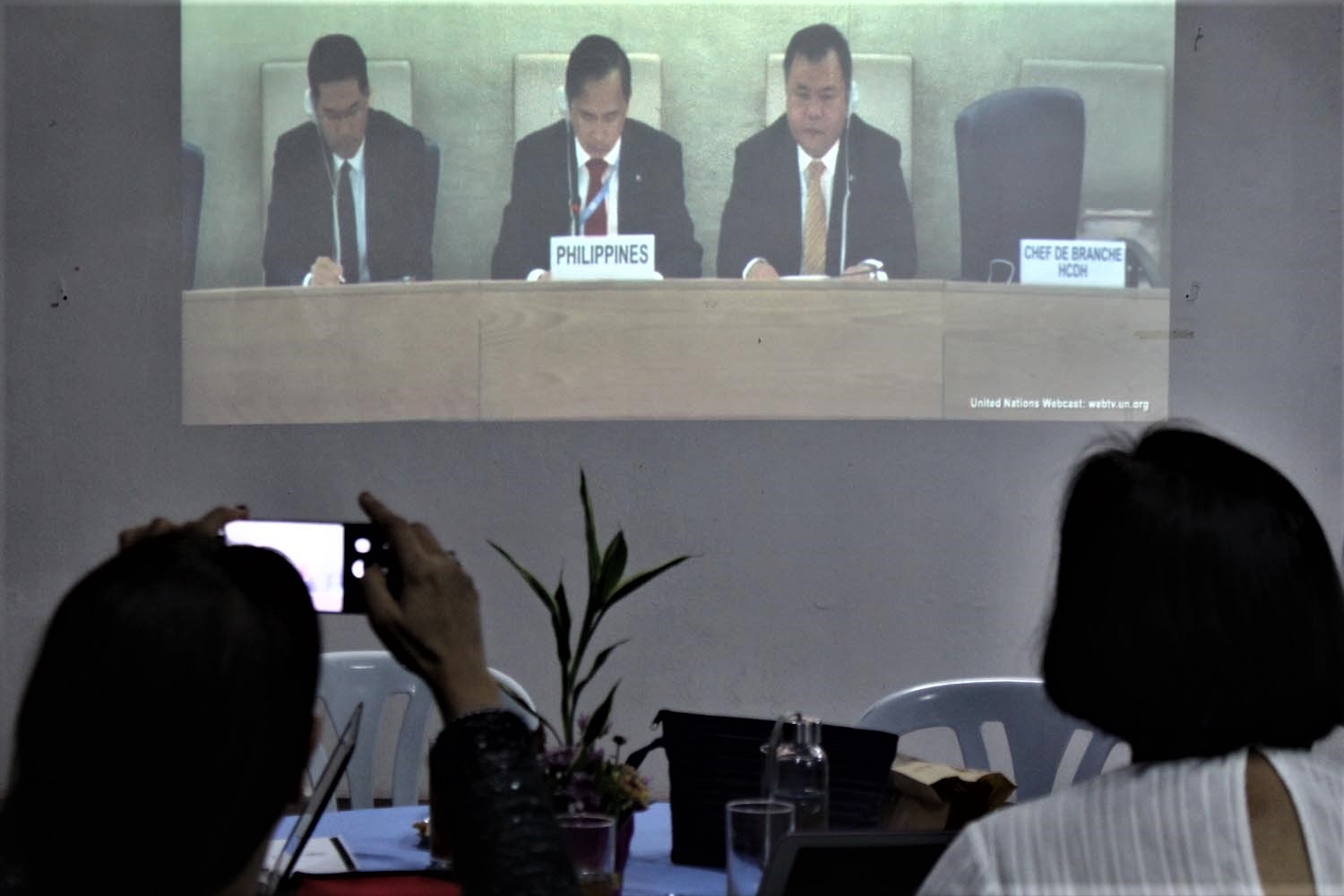 MANILA, Philippines – The Philippines rejected more than half of the recommendations on the human rights situation in the country during the 36th session of the United Nations (UN) Universal Periodic Review (UPR) in Geneva, Switzerland on Friday, September 22.

Out of the 257 proposals it received from members of the UN, the Philippines accepted 103 and took note of the remaining 154, according to the report of the UPR working group.

Among those rejected were calls for a thorough probe into supposed extrajudicial killings (EJKs) in the war on drugs of the Duterte administration. The Philippine delegation insisted these have already been addressed in the dialogue last May, and that the deaths from police operations “are not EJKs.”

“These are deaths arising from legitimate law enforcement operations or deaths that require further investigation following the established rules of engagement by the country’s law enforcers,” it explained.

Also not accepted are the requests to allow UN special rapporteur Agnes Callamard to visit the country to investigate EJKs.

The Philippine delegation said that while it can support 99 out of the 154 noted proposals, it “cannot guarantee or commit to their fruition, given that the results of processes required to implement them are beyond the sole control of any of the branches of the government.”

“This is specifically true for recommendations that pertain to legislative action, which would require consultative processes with stakeholders,” it added, such as those that tackle the reimposition of the death penalty and the lowering of the age of criminal responsibility.

The country also lamented that among the 99 are some proposals that are “perceived to insinuate, advertently or inadvertently, that the State has not taken any action whatsoever on the concerns raised despite having substantially reported the same both in the National Report and during the interactive dialogue.”

As for the remaining 55 noted recommendations, the Philippines said it couldn’t fully support them because it couldn’t agree to the “premises and context” of the proposals. These items, it said, were “sweeping, vague and even contradictory, especially in the context of the Philippines’ democratic processes.”

On the other hand, the government fully supported the 103 recommendations, given that these “clearly gave due recognition and respect to the State having implemented them or to its current efforts in implementing the same.”

Among the recommendations the Philippines accepted were those for “sustainable protection of family and society in general, such as the preservation of the sanctity of family life, effective advocacy of economic and social rights through development, mitigation of the adverse effects of climate change, eradication of poverty, and improvements to access to health care and public education,” reported the Department of Foreign Affairs (DFA) in a statement on Saturday, September 23.

The Philippines also accepted those “aimed at enhancing the current capacities of the country to protect the right to life, liberty and property through the rule of law and accessibility of victims to justice in pursuit of anti-abortion initiatives, eradication of all forms of slavery, counterterrorism efforts, and the anti-illegal drugs campaign.”

Proposals such as strengthening international cooperation with human rights mechanisms for the protection of the most vulnerable sectors in Philippine society and formulating the national human rights action plan were also accepted, added the DFA.

The recommendations were made when Foreign Secretary Alan Peter Cayetano presented the country’s UPR report in May. (READ: Cayetano to UN: No new wave of killings in PH)

The DFA, for its part, touted the adoption of the country’s human rights reports card by the Human Rights Council during the UPR review.

It shows that the Philippines “has nothing to hide with its human rights record,” Cayetano said in New York, where the 72nd Session of the UN General Assembly is taking place.

Cayetano reiterated that the country “will remain resolute in its respect for and protection of human rights as it strives to improve the lives and welfare of each and every Filipino by protecting them from the scourges of drugs and criminality.”

Malacañang also welcomed the report’s adoption, saying that it “recognizes the human rights record of the Philippines and our country’s commitment to human rights under the leadership of President Rodrigo Roa Duterte.”

“This likewise reaffirms our respect for the dignity of the Filipino people and the protection of the Filipino family as we strive for a better life in a society free of illegal drugs and other crimes,” said Presidential Spokesman Ernesto Abella in a statement.

The members of the Philippine team in the UPR include Cayetano, Senior Deputy Executive Secretary Menardo Guevarra, and Undersecretary Severo Catura of the Presidential Human Rights Committee.

The UPR is a peer review mechanism of the 47-member UN Human Rights Council. Member states discuss human rights policies and plans, and exchange views on how to improve human rights through international cooperation, explained the DFA.

The UPR is now on the 3rd cycle of its human rights review, covering all UN member-states, and will be finished in 2021. – Rappler.com