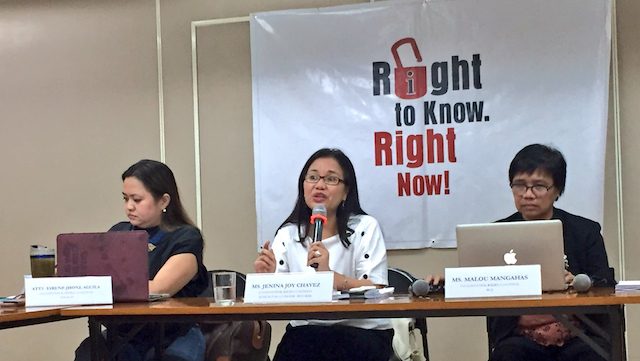 MANILA, Philippines – Over a year since the Freedom of Information (FOI) program opened up the executive branch of government to more public scrutiny, several issues remain in its implementation, said a coalition of citizen advocates.

In a forum in Quezon City on Friday, September 22, the Right to Know Right Now Coalition (R2KRN) said it put the FOI rollout to the test by making data requests with 20 government agencies from May to September this year.

Based on the coalition’s findings, procedural and substantive problems still surfaced, despite successful requests made in some agencies.

On the procedural level, they were “somehow discouraged by the inconsistent and non-uniform appreciation of the citizens’ right to information,” said R2KRN in a statement read on Friday by lead convenor Eirene Aguila.

“Instances of requests not being heeded, the favoring of particular request formats, offices or bureaus not even acknowledging requests made – much less denying formally the requests lodged with them – and the less-than-ideal coordination among offices and agencies holding information are customer service that is wanting and which should have been helpful for the requestee,” continued their statement.

As for substantive issues, the coalition noted the “confusion” in the appreciation of FOI exemptions, as well as the discretion “some agencies seem to exercise when it comes to releasing information they think should not be in the hands of the public.”

R2KRN also pointed out the recent redactions in public documents – like the latest Statement of Assets, Liabilities, and Net Worth (SALN) of Duterte Cabinet officials – “pitting the right to information against the right to privacy.”

If these are not addressed, the coalition said the public’s right to information “will be negated altogether” and the executive order on FOI will be “a mere scrap of paper.” In July 2016, President Rodrigo Duterte signed Executive Order No. 2, operationalizing FOI in the executive branch.

The coalition then reiterated its call for an FOI Law, and vowed to be vigilant in ensuring its passage. R2KRN noted that at present, the bill remains pending at the committee level in the House of Representatives, while its counterpart measure in the Senate has entered the period of amendments.

“Only with the passage of a law and only when agencies meaningfully facilitate the people’s constitutionally guaranteed right to information can we really say that we are moving forward in breathing life to the right to know,” R2KRN said.

For its 3rd round of FOI tests, the coalition split into two groups to send data requests to regulatory and finance agencies as well as to offices that figured in recent events.

The first group – composed of the Action for Economic Reforms (AER), CheckMySchool, Bantay Kita, and Focus on the Global South (Focus) – filed requests with 10 agencies. Meanwhile, the Philippine Center for Investigative Journalism (PCIJ) took on the remaining 10 agencies.

The first group reported that few agencies completed their request within the 15-working-day period under the FOI EO. One request even took 82 days to complete, said Jenina Joy Chavez of AER.

Bantay Kita commended the Commission on Elections (Comelec) for providing complete sets of data for the campaign finances of winning senators and representatives in the 2016 elections. But they recommended that the poll body set reasonable fees for the reproduction of documents.

Focus promptly received from the CARP Coordinating Office of the Department of Environment and Natural Resources (DENR) some data sets related to the Comprehensive Agrarian Reform Program (CARP).

CheckMySchool said the Department of Public Works and Highways (DPWH) sent complete data on the usage of funds for the School Building Program, but it took 42 days for the agency to send the data.

However, the first group said 3 agencies denied all of their requests, due to supposed FOI exemptions and unsuccessful communications: Board of Investments (BOI), Land Registration Authority (LRA), and Land Bank of the Philippines (Landbank).

In two agencies, some requests were granted while some were denied. One of them – the Department of Education (DepEd) Quezon City Division – even asked for a court order, said CheckMySchool, as an attachment to their request because of a “sad experience” in a previous court case.

The PCIJ’s encounters with its 10 agencies also had mixed results.

It said that out of 40 requests, 22 were granted with complete documents, while 5 were approved but with incomplete documents. The PCIJ did not receive data in 7 requests, while two are still pending, beyond the 15-working-day deadline. Data for the rest of the requests were either unavailable from the agency or were not applicable to the agency contacted.

The PCIJ lauded the Land Transportation Office (LTO) for providing complete data sets, the Governance Commission for GOCCs for being efficient in processing requests, and the Insurance Commission for promptly acting on requests as well as for responding to clarificatory requests.

On the other hand, the PCIJ reported problems encountered in other agencies such as the Anti-Money Laundering Council (AMLC) and the Land Transportation Franchising and Regulatory Board (LTFRB).

The AMLC cited confidentiality provisions in one request, while the LTFRB took some time to collect and organize its data, said the PCIJ.

As for the online eFOI portal, the PCIJ reported that as of September 5, a total of 1,713 requests have been filed. However, around a third of the requests, or 544, have been denied.

Requests were usually denied because the data requested were already available online, the concerned agency was not the repository or holder of the requested information, or the request was a frontline service, which is not covered by the FOI provisions, said the PCIJ.

A total of 597 were successful or partially successful, while 62 were closed or when the requesting party did not respond to clarifications to his or her request within 60 days from return.

The PCIJ also noted that 44 agencies have yet to receive requests in the eFOI portal.

In addition, data from the Presidential Communications Operations Office (PCOO) showed that 151 out of 222 national agencies and 40 of 156 government-owned and controlled corporations (GOCCs) have submitted the required FOI Manual.

But only 4 state universities and colleges (SUCs) out of 113 have submitted FOI Manuals so far. – Rappler.com